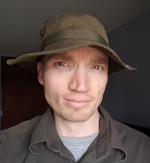 Bentley Christie – who never ceases to be amazed (and amused) by the number of people who call him “Christie Bentley” – has from a very young age been fascinated with a wide array of earthly creatures, and the natural systems they inhabit.

One year his plans might include eventually becoming an ornithologist, while the next it could just as easily be an ichthyologist or perhaps even a herpetologist. The only thing abundantly clear by the time he reached university was that biology was the only major that could possibly help him get started in the right direction!

Well, he never did really grow up (thank goodness), and a permanent career in biology didn’t come to pass, but his child-like enthusiasm for the natural world continues to this day, and plays an important role in the way he lives his life .

One of Bentley’s favourite hobbies since his mid-twenties has been vermicomposting – about which he has received an inordinate amount of gentle teasing from family and friends. Unphased, he presses on in pursuit of the perfect worm composting system – always more than happy to share the virtues of his passion with anyone willing to listen (or read).

Bentley currently lives with his wife, two kids, one cat and a bazillion earthworms in rural Southwestern Ontario (Canada, eh!), and can easily be reached via E-Mail.