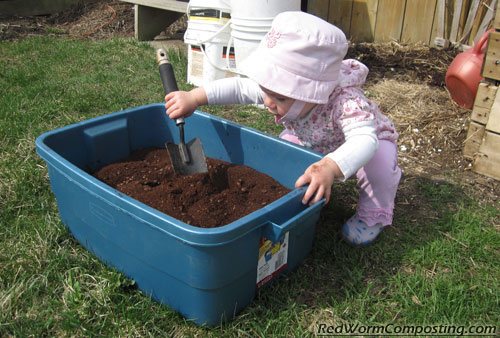 My daughter helps me to prep the coffee grounds before putting them on the garden.

At the beginning of the month, I wrote about the large quantity of worm food I received from a farmer friend, including a huge box of coffee grounds. I’ve been playing around with the grounds as a worm food in the weeks since then, but haven’t started any fun projects to write about here (you know me and “fun projects” – haha).

Just as a quick aside, I should mention that I have been REALLY impressed with the grounds thus far. They do require a bit of extra work to make them worm friendly, but once they’ve reached that point, the worms go wild for them. My dad and I added a large quantity to our big “winter worm bed” (sheesh – it’s about time for an update on that, eh?), then soaked them down. He checked on the situation recently and was raving about the fact that the material is absolutely loaded with worms now!

Anyway, when I was outside doing some ‘gardening’ with my daughter (I use the term loosely, since there typically isn’t a lot accomplished – but it DOES tend to be a lot more fun! haha) I thought it would be interesting to see what would happen if I added a large quantity of coffee grounds to the bed beside my big outdoor worm bin. This garden was one of my “garbage gardens” from last year so there are likely some worm cocoons and potentially even worms still there – not to mention the fact that it is right beside a pretty decent source of worms. The only real garden plant in that bed is a Clematis – since they enjoy acidic soil, I think this could work out quite nicely (there IS a monster Catnip plant that pops up each year as well, but I’m not too worried about providing ideal conditions for it). 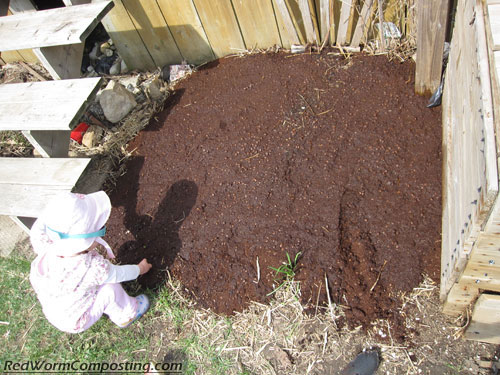 Since the grounds are quite dry, my daughter and I mixed in some water before adding them to the bed. We then watered the material some more using a watering can. Some rainy weather recently has also helped to soak down the grounds (which will be important to help kickstart the decomposition process). As it stands, there is a pretty thick layer on the bed right now, but I think I’m going to make it even thicker today. Coffee grounds actually make for a really nice looking mulch – and you can’t beat the smell! haha

It should be fun to see if I can get the bed crawling with Red Worms!
8)