I have clearly been living under a rock for the past few years! I just got finished watching an awesome session at the Homegrown Food Summit (link may not work by the time some of you are reading this) presented by Joel Karsten all about “Straw Bale Gardening” – shockingly, a concept I’d never even read/heard about about previously (remember that rock? It’s a BIG one! lol).

NOTE: Video above is one I found on YouTube (featuring Joel Karsten). As I discovered, there are LOADS of straw bale gardening videos in general, so you may want to do a search there if this is something you want to learn more about. Joel’s “Straw Bale Gardens” website is also an excellent resource.

Interestingly, I have however toyed with the idea of trying something similar, especially after using loads of bales to create a big winter worm bed some years ago, and watching as “volunteer” plants popped up all over the place in the bed during the next growing season.

One thing is for sure – Red Worms LOVE decomposing straw and hay bales. I can’t tell you how many times I’ve left bales sitting outside before use (often as cover material for outdoor beds), only to then find them invaded by lots of Red Worms.

So, in a sense I am really smacking myself in the forehead (mentally – lol) for not putting two and two together a lot sooner! Straw bale gardening WITH composting worms would be like the ultimate combination!

The worms would help to accelerate the bale break down process (important for providing the plants with a rich “soil” to grow in). They would also be depositing loads of worm castings – what’s not to love about that?! 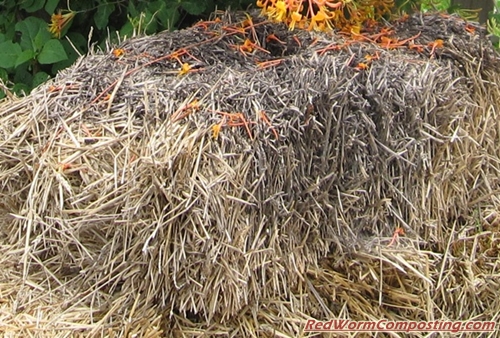 There are a variety of ways you could “prime” the bales. Whatever you do, DON’T use the approach outlined in the video above. Fertilizer salts are very harmful for worms, so it would take longer before the bales were worm-friendly if these were used. I would definitely suggest nitrogen sources that are a bit more “natural”.

If you made a “tea” using some really rich, fresh manure, and soaked your bales with it, that would be a great start. You might even try liquifying some food waste and pouring it on the bales.

**IMPORTANT**
Don’t add the worms to them right away (should you need to introduce them at all – if you have various outdoor beds already they will likely find the bales on their own). Let the bales age for a week or two outside, and make sure to monitor temps in the bales during this time. Joel says the internal temps can get really high initially, so you definitely don’t want to end up cooking your worms!

I love the fact that you can grow plants (eg herbs) in the sides of the bales as well – meaning you can grow even more plants in less space!

Some may wonder about straw vs hay. The latter will likely offer more “food” value for the worms (and ultimately for the plants) – but as Joel points out, hay can contain a lot more weed seeds. But can you imagine how easy it would be to weed a bale?

Anyway – as you can probably tell, the straw bale (vermi-)gardening concept has REALLY got me fired up. Needless to say, I have plans to try it out in my yard this growing season (which is just around the corner).

Have you tried straw bale gardening with composting worms? Please leave your comments/questions below!
😎