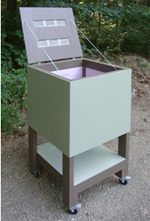 For quite a few years I’ve been envisioning the sort of “ultimate” home-scale vermicomposting bin that I would love to own and use. I was initially inspired by the large-scale flow-through reactors used by industry pros – it was clear that these were the best of the best in the world of vermicomposting. The problem, of course, is that these systems are very large (and very expensive) – not at all practical for my own situation.

I daydreamed of various ways to construct a much more compact version of this type of bed, but alas, I’m “all thumbs” – so even if I had been able to create a workable design, my chances of actually constructing it would have been slim to none. Teaming up with a skilled DIYer seemed like the next logical step, but I just couldn’t seem to connect with anyone who had a real interest in my vision! Multiple promising starts ended up fizzling out over time.

Joe Denial is what you might call a “Jack-of-all-Trades”. Originally trained (and employed) as a technical illustrator, he ended up in graphic design & advertising, before settling on home remodeling as his chosen vocation. Somewhere along the way he also happened to develop an interest in vermicomposting.

Back in the spring (2011), Joe ordered a bunch of worms and initiated a friendly email exchange to share what he was doing. One of his early projects involved the construction of a large flow-through vermicomposting bed – what would eventually become known as the “VermBin96”. Just for kicks and giggles, he decided to create some diagrams, take some photos and then send me a PDF copy to see what I thought.

When I saw Joe had done I was completely floored! If anyone could help me bring my “ultimate” bin to fruition, this was the guy! I immediately asked Joe if he had an interest in teaming up. Thankfully he said yes and, well, here we are!
🙂 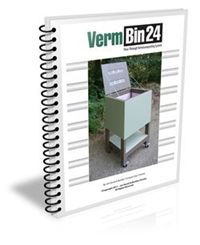 The VermBin24 (VB24) is a single-compartment, flow-through bin designed for those who want to experience the joys of truly effective vermicomposting, without the need to buy or build a professional system.

While it’s small enough to sit unobtrusively in a wide range of indoor or outdoor locations, the VB24 is still larger than many home vermicomposting bins, thus offering substantial waste processing potential.

I knew Joe was good, but I can honestly say that he’s exceeded my expectations in terms of creating a set of plans that are laid out in a clear, easy to follow manner, and a beautiful flow-through bin that doesn’t require professional building skills (or many hundreds of dollars) to construct!

The feedback we’ve received already has been amazing! One of our customers, Neal (“from Maryland”), was so pumped up about his VB24 building experience that he even decided to document the process and create a photo-journal that could be shared with fellow VermBin plan owners! (Now available for download in the member’s area)

Easier Harvesting of Worm Castings – One of the main advantages of flow-through bins is that they help you separate the worms from the worm castings. As new materials are added over time the worms continue to migrate upwards, away from concentrations of their own wastes.

Better Quality Worm Castings – Anyone who has tried to harvest compost (if you can even call it that) from an enclosed plastic tub system will know that it can look (and smell) a lot more like sludge than beautiful worm castings. Good quality flow-through beds on the other hand promote the proper stabilization of the vermicompost – in large part due to the increased oxygenation of the composting zone.

Healthier Worm Population – Single compartment flow-through beds provide composting worms with something much closer to their “ideal” living environment. Rather than basically being forced to live in their own wastes for extended periods, they can continue moving upwards towards the best feeding zones.

K.I.S.S. at its Best – Unlike the stacking tray flow-through bins, single-compartment bins are a breeze to use. No more trying to get worms to migrate from tray to tray or ending up with gobs of worms down in your “worm tea” reservoir. You basically just add wastes near the top, then harvest worm castings from the bottom (once ready).

VermBin24 Flow-Through Vermicomposting System plans with user guide – learn not only how to construct your VB24 bin, but also how to set up your vermicomposting system effectively.

VB48/VB96 Upgrade Guide – Additional info/specs for those interested in building the larger versions of the VB24.

DIY Compost Tumbler Plans – This was released (and sold) originally as a stand-alone package, but I decided to include it with the VB Series Package since the topic of compost tumbling ties in nicely with VermBin vermicomposting.

1) These are e-resources (accessed online via computer) and that no physical goods will be mailed to me.

2) I can order this package and access the member’s area from anywhere in the world as long as I have a web connection and am able to use at least one of the two secure payment handlers (Paypal & 2Checkout – both accept credit cards).

3) This is a one-time payment, and I will receive ALL additional updates & add-ons absolutely free of charge.

4) Some DIY skills (and tools) will be required (and almost certainly some money spent on building supplies) to complete this project.

Order with confidence on 100% secure servers