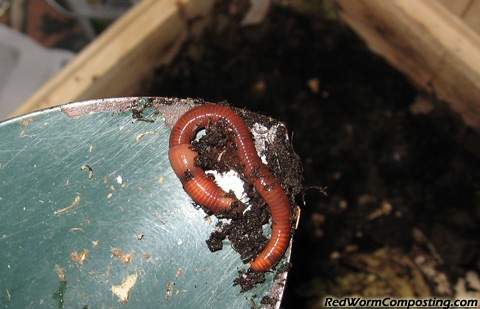 One of the original four Red Worms added to this bin

Well folks, I decided it was finally time to pull the plug on my Four Worm Reproduction Experiment. I know I’ve really let things slide on the update front, so hopefully the final wrap-up will provide some closure for those of you who have been following along, and are keenly interested to learn how it went.

As a bit of a recap, I started this experiment (I use the term very lightly) back on December 12, 2008 (so about 5 1/2 months ago). I was curious to see how quickly Red Worms can reproduce, and specifically how quickly four adult worms could produce a thriving population of worms.

I should say right off the bat that conditions were FAR from ideal in the bin. The worms had to deal with really dry conditions for much of the experiment given the fact that I was using a flow-through (stackable) worm bin and was quite forgetful when it came to keeping everything nice and wet – especially early on.

In order to limit the amount of disturbance to the system, I decided not to do counts during the experiment – aside from the time involved, I felt that this would potentially have a negative impact on the worms. Those of you who are curious about the population size will be pleased to learn that I did in fact take the time to count the worms yesterday. It took awhile, and I have little doubt that I missed some smaller worms, but all in all I think it is a pretty good estimate of the population.
I separated worms into two categories only – adults and juveniles (as dictated by the presence/absence of a clitellum). From what I could tell, there were FAR more juveniles than adults. Here are the numbers:

So a total of 106 worms – or an approximately 25 fold increase in population size! I can only imagine how many more worms there would have been if I’d provided ideal conditions.

I didn’t bother to count cocoons, but did see a fair number while I was picking out worms.

As for the four original worms I put in the system, I think they all survived, but there was really only one worm I could say without a shadow of a doubt was one of them (since it was much larger than the rest of the worms in the bin).

All in all (despite the lack of attention), I’d say it was a pretty interesting experiment. I would certainly like to try it again, but next time I’d likely use an enclosed plastic bin and would be more diligent with adding food etc. I also would like to try putting Red Worms and European Nightcrawlers head to head (each in their own bin) in a reproduction challenge to see how they compare.