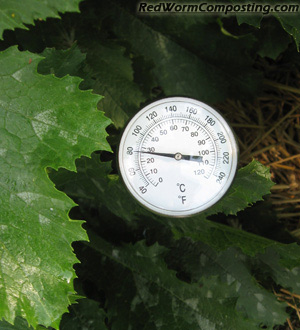 This is a topic that is definitely long overdue for discussion here on the blog. In a sad twist of irony (since I’ve been planning to write this post for awhile), I actually received an email from one of my customers last night reporting that he had lost all the worms in one of this bins due to overheating.
🙁

I guess part of the reason I don’t think about this issue too much myself is because I generally don’t use large plastic tubs for indoor vermicomposting. As I’ve written recently, my big wooden outdoor bin has been overheating this summer, but it’s generally not a major concern because the worms can simply move to the outer edges where temperatures are considerably lower (moisture is able to easily evaporate through the spaces between the boards).

Heating in a worm bin is essentially the same thing that is occurring in a large compost heap. When it comes down to it, any time you combine nitrogen-rich materials (eg food waste, manure etc) with carbon-rich materials (eg. shredded cardboard, fall leaves, straw) and provide your mix with moisture and oxygen, it is going to heat up. If you have enough mass – generally anything over 1 cubic yard – you will stimulate full ‘hot composting’ conditions – but even with much smaller volumes of material enough heat can be generated to cause harm to worms.

Generally, it is when you are first setting up a system that this is most likely to be a major issue, since you are adding a bunch of materials at once. Also, as mentioned, the likelihood of this being a major issue increases as the size of your system increases. Once your system is up and running and has reached an equilibrium (or close to it anyway), you won’t likely run into too many more heating issues. You can still definitely get hot zones in larger systems – especially those influenced by hot outdoor temperatures, but it’s still less of a concern.

So how do we prevent disaster from striking?

Aside from simply becoming aware of the potential for overheating when setting up a larger system, I highly recommend that everyone adds a compost thermometer to their vermicomposting toolkit! Aside from the worms, it is definitely a vermicomposter’s best friend!
😆

If you can’t find one locally (and don’t want to order one online), feel free to use a meat thermometer instead (or even a health-related thermometer) – the longer the probe the better, however. You definitely want to be able to reach all regions of your composting mass.

I also (as always) recommend that systems be set up well in advance of the addition of worms – obviously this won’t always prevent issues (as illustrated by my customer’s disaster), but if you also use a compost thermometer, and only add worms once the system has cooled down, you’ll certainly be better off.

Of course, systems can also overheat after the worms have been added – in fact, the worms themselves can even act as a catalyst of sorts. Whether it be the result of moving materials around or the addition of castings to the mix, they can actually help to stimulate excess microbial heating, thus ending up at least partially responsible for their own demise. As such, it is really important to keep an eye on temperatures in the bin for the first while after adding your worms. If you see the temperature starting to rise past 30 C (86 F), I’d highly recommend splitting the contents of the bin between several different containers – preferably without lids to allow for more air flow (and thus cooling).

This is yet another limitation of using plastic tub worm bins – because they don’t allow for much air and moisture release, heat is slow to dissipate once generated. Wooden bins are great for keeping worms cool, especially if they have spaces between the boards. Unlike plastic, wood can actually ‘breath’ – that is, allow moisture to pass through, thus helping to keep the contents cooler.

Anyway – just some food for thought, especially for those of you planning to set up larger systems!
By the way – if you live in a colder region, you can actually use this excess heat to keep your worms warm in the winter, but you’ll definitely need some insulation and quite a lot of organic waste to ‘fuel the fire’ so to speak! You’ll be hearing a lot more about cold weather vermicomposting later this year, so I’ll leave it at that for now.
8)

Adding Red Worms to Your Garden