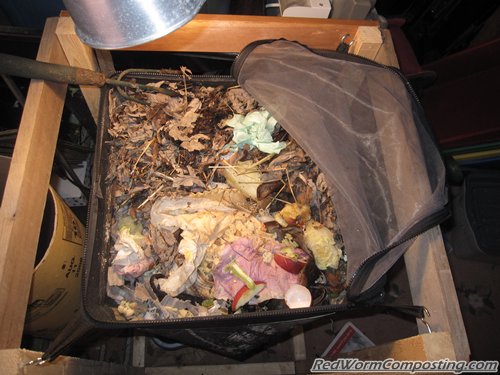 I just wanted to post a quick “Worm Inn Journal” entry today. Back on Jan 22, I mentioned my decision to see how much food waste I could process with the system (see “Worm Inn Journal – 01-22-10“). As it turns out, I didn’t actually start adding more food materials until Jan 26. The total amount I have added so far is 9.83 lb – or the equivalent of roughly 1.4 lb a day. Not too bad, but I’m hopeful that I can improve upon this.

I am doing relatively little in the way of waste preparation. The materials generally sit in my scrap holder until the “BioBag” insert is full. At this point I toss the bag out on my deck to freeze for a few days to assist with further cellular degradation (specifically for some of the more resistant plant/fruit materials). Next, I simply dig a trench on one side of the system, dump the waste in, then cover with materials from the other side. Waste is added on alternating sides each time (and just so we’re clear here – I’m not literally adding 1.4 lb per day. I’ve actually only added wastes three times during the seven day period).

Given some of the (bulky, resistant) stuff I’ve been adding, in some ways I’m surprised by the fact that I’ve been able to continue adding materials at this rate. If this was an enclosed Rubbermaid system (with similar surface area), there’s no question that I would have reached the point of seriously “overfeeding” by now. So that’s cool!

I may make an effort to further grind/chop wastes at some point to see how much of an impact that has on the volume of material that can be processed. Will stick with the bulky stuff for now though – am somewhat curious to see if I’ll hit any sort of “wall” (causing issues in the bin and/or simply having no more room to add materials).

So far so good! I likely could have added materials on BOTH sides today if I had wanted to really push the envelope, but I figured it might be better to play things a bit safe for the time being.

Anyway, I’ll provide another update sometime next week for sure!
8)