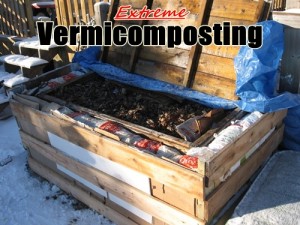 Likely one of the most common reader questions/concerns over the years has related to the challenge of vermicomposting outdoors (or at least in locations that are not climate-controlled).

While I like to think of vermicomposting as the “ultimate” indoor composting method, I know all too well that keeping worm bins indoors is not always an option – whether it’s due to spousal pressure, space issues, personal preference, or one of countless other reasons, sometimes we simply have no option other than setting up our systems outside.

Naturally, in a lot of locations it can be a major challenge to maintain these systems for at least part of the year. In these cases, our only choices are: 1) to throw in the towel, 2) to bring some or all of our worms indoors, or 3) to get creative with our strategies!
😎

For quite some time I’ve been meaning to put together some information on this topic, and late last fall I finally dove in and started creating what has become the “Extreme Vermicomposting” course.

END_OF_DOCUMENT_TOKEN_TO_BE_REPLACED

Hello, I was on a forum and saw a vermicomposting question. They wanted to catch earthworms to use in their vermicomposting. I referred them to your site and suggested the purchase their first batch.

One poster suggested just setting up a pile of leaves and scraps and catching wild red wrigglers. This got me thinking.

Being primarily a compost worm and with us not having lines of compost from coast to coast for them to travel in, how likely would it be for someone to “catch” any red wrigglers this way.

Also, my though was what are the chances of getting some worms or eggs if you went to a big box and bought a bag of organic compost and added to the bin. I’d think you’d have issues with the bag getting too hot and killing them, but I didn’t know if you’d ever experimented with this or possible the same idea, but straight from a whole seller.
Thanks.

Hi Joel,
These are some great questions!
There really isn’t such a thing as a “wild” Red Worm – well, at least not the type of “Red Worm” we are after. Eisenia fetida/andrei worms are very closely associated with human activities, most often being found on farms (in old manure piles) or in compost heaps/bins within town/city limits.

Another type of “Red Worm”, Lumbricus rubellus IS more of a “wild worm”, and there is a pretty good chance you could attract them with a heap of old leaves (assuming they are found in your region) – but they are NOT an ideal worm for vermicomposting. They don’t reproduce nearly as rapidly as Eisenia fetida/andrei, they’re not as well-suited for processing rich organic waste materials, and they don’t have the same sort of tolerance for hot temperatures and crowded conditions as Eisenia worms (although they are much better suited than typical garden/lawn worms).

The other potential “problem” with L. rubellus is that it END_OF_DOCUMENT_TOKEN_TO_BE_REPLACED