Is Compost Tea Just a Fad? 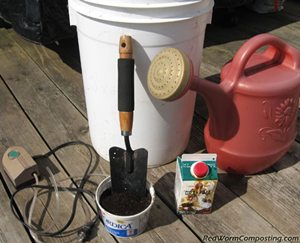 One of our readers recently pointed me in the direction of a rather interesting article on the Fine Gardening (magazine) website entitled, “The Jury is Still Out on Compost Tea“.

I have little doubt that the article has touched a nerve with many serious compost tea proponents, since it essentially questions the value of using teas for various gardening applications (strangely they don’t have a comments section after the article – would certainly be a great opportunity for an interesting discussion).

I must admit to feeling a wee bit defensive myself when I first read it, even though I’m not really a compost tea advocate (simply haven’t used it enough myself). While I certainly don’t doubt that the “jury is still out” as far as more research being needed etc, and while I have little doubt that there are some people making exaggerated or even completely false claims – I just can’t help but feel that the author is potentially tossing out the baby with the bath water.

Here is an interesting blurb from the article:

Before you start using compost tea by the gallon, be aware that most of the claims made concerning this liquid have been anecdotal and, even then, inconsistent. The positive results from scientific studies have been few and, again, lacking in results meaningful to backyard gardeners. A documented benefit created under sterile conditions, for example, does not translate to a benefit in your backyard, with its slew of natural microorganisms.

Again, I certainly agree that there are lots of wild (and often unsubstantiated) claims out there re: the value of various types of compost teas (including vermicompost teas, of course), but the inner science-guy in me doesn’t mind keeping an open mind about some of the “anecdotal” positive feedback I’ve received from a lot of people. Take my good friend, Mike “Strawberry Guy” Wellik, for instance (certainly looking forward to seeing what you have to say about all this, Mike!) – he is a very science-minded, rational individual (with academic training in entomology, if I’m not mistaken), and has determined via testing in his strawberry business that vermicompost tea applications can be very beneficial! His results aren’t published in the academic literature, but you know what – I’m inclined to take his word for it!
😆

BTW – be sure to check out Mike’s recent YouTube video: Brewing and Using Vermicompost Tea

Dr. Clive Edwards, who was originally rather skeptical of compost teas (as stated in a “Castings Call” interview with Peter Bogdanov – will track down the specifics on that one), has even changed his tune in recent years, based on the promising findings of various research projects conducted by his team at The Ohio State University Soil Ecology Lab. He went so far as to refer to vermicompost teas as “almost magic” in an email he sent me, referring specifically to the success he had growing a prolific crop of cherry tomatoes in his own garden (uh-oh! Anecdotal results alert!! haha). This is an incredibly-accomplished (hundreds of academic publications to his name), “old school” scientist we’re talking about here!

I guess my main point here is that, even if we ignore all the promising (if nothing else) academic research results, I just don’t think we can say that ALL non-scientifically-proven claims should be ignored. Based on all that I have read – academic or otherwise – my gut feeling is that there is DEFINITELY some value in using compost teas!

Obviously, as is the case with “castings”, “compost”, “vermicompost” – we need some sort of firm definition of what exactly “compost tea” is. Not all teas are created equal, that’s for sure! Just because a certain type of tea produces a given set of results in a scientific study does not necessarily mean that another type of tea (or even the exact same tea) will produce the same results in the “real world” – so I guess, on that level, the author and I can agree. I simply feel that there is enough evidence (academic and anecdotal) to warrant a more optimistic view!

But hey – to each his/her own, right?

Anyway – I would LOVE to see what people have to say about this! MY comments section is open for business!
😆

The Magic of Vermicompost