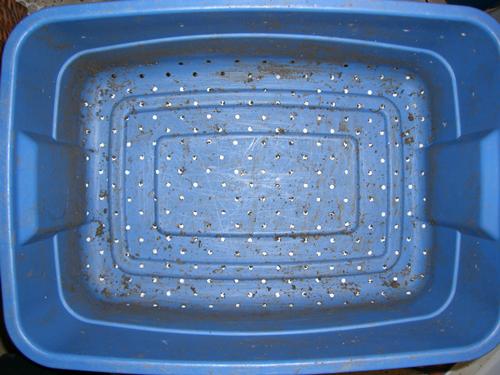 Quite some time ago I made a video and wrote about my ‘Garbage Bag Harvesting Method‘ for separating worms from mature vermicompost. The idea behind this method was that it was a simple, inexpensive, and passive means of transferring worms to a new bin. Anyone who has gone down on all fours with a tarp and the contents of a mature worm bin to do the “light harvesting method” will know all too well that this is not the most enjoyable way to spend your time (speaking of which – I currently use a modified version of the light harvesting method that I will be writing about soon).

I received an email recently from good vermi-friend (and long-time reader of RWC) David Lozowsky, who shared with me his method for separating worms from vermicompost. His method is based on the same principles as the garbage bag method, but in my opinion is a much better approach. Rather than using a thin film of plastic, David simply uses an empty bin (of the exact same dimensions as his worm bins) with 1/4″ holes drilled in the bottom.

Interestingly enough, David uses the exact same bins as me – Rubbermaid Roughneck totes with the following dimensions: 24″x16″x8.75″ (LxWxH). This is as close to a ‘perfect’ DIY tub for vermicomposting as you can get (in my humble opinion) – it’s cheap, durable, holds a lot of worms/compost, and has a great surface-area-to-depth ratio.

Getting back to the topic of discussion…

Essentially, what David does is let a given worm bin mature over the period of time (hopefully he’ll chime in and let us know approx how long it takes before he harvests). As you can see in the pic below, the bin is full of vermicompost with very little (if anything) in the way of recognizable ‘food’. If you saw a close-up of the original photo, you’d see that it was also full of Red Worms. 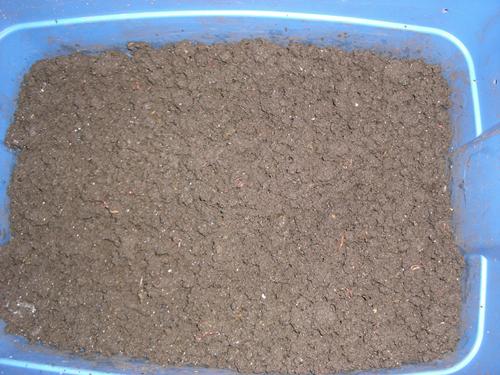 Once mature, a new system is prepared so that the worms have a tempting new habitat to migrate into (the photo below shows what the new system might look like). The tub harvester is then placed on top of the new system (sans lid, of course) and the contents of the mature bin are added. Next, two desk lamps are positioned over top of the harvesting tub to help encourage the worms to migrate downwards. After 12 hours or so, the material is mixed up to help the compost to dry out a little more and encourage any of the remaining stragglers to make the journey to the new bin. 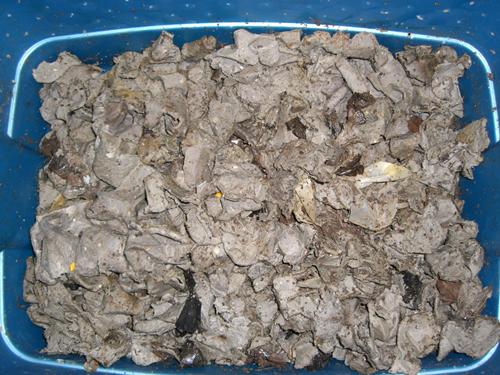 According to David, this method has worked extremely well – I seem to recall him mentioning that only 5 or so adults were left after his last harvesting session.

Of course, people are going to naturally wonder about cocoons and hatchling worms – always the main issue when it comes to harvesting vermicompost. Like any other method, this approach will almost certainly result in plenty of cocoons and young worms being left behind. If this is a major concern I suggest letting the material sit for at least a few weeks in a new bin with some tempting food material (aged manure, water melon etc) sitting on top. Any worms left over should congregate in this area, and there should be some hatching of the cocoons as well. You won’t likely get every last one, but at least you’ll be able save a lot of little wigglers this way.

I personally don’t worry too much about this sort of thing. I have such an extensive system of trenches and compost ecosystem zones out in my yard that I feel secure in the knowledge that any left over worms will be able to find a safe haven without too much difficulty.

Anyway – that’s basically it. As you can see, this is a nice easy (and inexpensive) way to move your worms to a new bin, and end up with some fantastic compost in the process!

Thanks again David for allowing me to share this on the blog.
8)