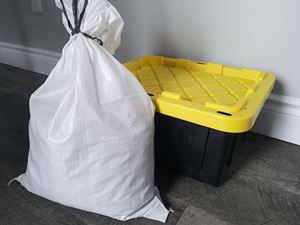 The “Worm Mix” (aka “Worm Culture”) approach is the name given to the way I’ve been selling composting worms up here in Canada since 2009. The in-a-nutshell “big idea” is that instead of selling worms by the pound or count you are selling rich cultures of worms (of all ages) + cocoons + lots of “living material” + other beneficial composting organisms. It can be a great product option for new worm farmers and seasoned veterans alike, and a great way for vermicomposters to start up a new worm bins and other systems.

But, it’s also an approach with some potential pitfalls! It requires an open mind, and a bit of a paradigm shift for most people. Quality control and education become even more important. In the wrong hands, it can easily be (and sadly has been) abused.

My aim with this blog post (and other resources) is to help people gain a better understanding of the concept, and hopefully benefit from it!

Right off the bat, I will offer my usual caveat…

The term “Worm Mix”, like many other vermicomposting terms doesn’t refer to one exact thing – especially not when used by people other than me. As such, please don’t assume that just because someone else is selling something with a similar name that it’s the same “Worm Mix” I teach people about. Again, education is a key part of this – and anyone selling a worm mix type of product should also be providing enough information to create a clear picture for the customer. 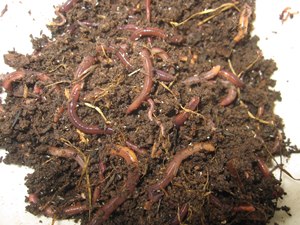 Not surprisingly, many people have trouble fully grasping the Worm Mix concept right away. It can be a bit frustrating at times, but I get it – the “pounds of worms” (and “counts”) model has been hammered into our heads over and over again, so it can be challenging to break free from that.

In the past, people have assumed I’m referring to:

None of these fully capture the concept – but all of them are at least somewhat related.

With my own mixes I am always aiming for:

1) Lots of rich, worm-worked “living” habitat material (earthy-smelling, humus-loaded stuff) – far more than the amount of peat/coir (etc) you would get with a typical bulk order of worms.

2) Lots of worms, of all ages and sizes – including cocoons (basically, a thriving worm population that has been living in – and actually helping to create – the habitat material for an extended period).

3) A fairly diverse ecosystem of other composting organisms. Obviously, this includes loads of beneficial microbes – but also a variety of macro-organisms such as isopods, millipedes, springtails, and mites.

4) At least some extra bedding materials – the habitat material will usually have some, but I also like to include newer material in the bag itself.

There are plenty of potential variations – and this flexibility is one of the great things about worm mixes. The KEY is always to be completely transparent with your prospects/customers about what you are providing!

What a Worm Mix Should NEVER Be:

The only exception might be when producing a Worm Mix for outdoor systems. Outdoors, the development natural populations of various flies etc is a completely normal (and inevitable) part of the process. It won’t create any hassles for the vermicomposter, so a somewhat richer mix that happens to have some flies or other undesirables would likely be just fine.

** Always put yourself in the shoes of your customer – and ask yourself how YOU would feel receiving the product. **

On that note, let’s not look at…

The REAL Product You Are Selling (Spoiler: It’s Not Worms)

The big hang-ups people seem to have with the Worm Mix concept almost always revolve around the worms. How many worms are there? What’s the total weight of worms in the mix? How do you ensure you have the exact same amount of worms each time? etc

In my recent “Natural Worm Farming” post I zoned in on the importance of not viewing worms in isolation – i.e. NOT treating them as though they are the only important component in a vermicomposting process. This is a hugely important part of the Worm Mix concept.

Here’s the thing – with a really rich, active living material you almost don’t even need worms at all (vermicomposting heresy, I know! lol). They are fantastic helpers – don’t get me wrong – but obsessing about exact weights and numbers of them is utterly bonkers! If you are working with a material that has lots of worms in every handful you grab, it’s safe to say a good-sized bag of that same material will be fantastic for starting up a new worm bin. 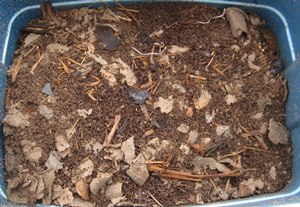 Imagine the contents of a thriving worm bin that’s been going for a while. You will likely have loads of worms and cocoons, lots of rich, dark earthy stuff, but also plenty of unprocessed, carbon-rich material. Now imagine using all that to start up a new (larger) system.

In essence you are stocking the new system with a much more “natural” density of worms. And these worms are coming with the same valuable habitat material they’ve been thriving in, so you are hitting the ground running with a full vermicomposting ecosystem.

But you are also providing the worms with new resources and space – so their natural talents/adaptations kick in, resulting in rapid population growth. (Something I refer to as the “New Colonization Growth Response” or NCGR)

Again, this is just an analogy meant to illustrate the overall concept (although there can be some parallels between Worm Mix production bins and typical worm bins).

This type of mix makes it very easy to start a new system. It helps your customers avoid some of the common hassles associated with stressed out bulk worms, and even gets them that much closer to their first harvest of worm castings!

Getting back to the “product”…

I know how easy it is to assume we are trying to sell worms – and it helps to explain the “hang-ups” mentioned a minute ago. But, unless you are selling worms as bait or as live food organisms (neither of which are ideally suited for the Worm Mix approach), what you should be focused on selling is an enjoyable, successful vermicomposting experience!

A good quality Worm Mix + excellent guidance and support can be a fantastic way to achieve this!

There is obviously a LOT more that can be said about the Worm Mix approach – we’ve really only just scratched the surface. Unfortunately it is beyond the scope of this blog post to get into all the ins and outs of the concept – but hopefully this at least provides some foundation and helps people to avoid some potential misinterpretation.

If this is a topic of interest, I highly recommend watching this video as well:

As I briefly mention, since the time of creating this video there have been some important developments on the Worm Mix front. In 2018/19 my “Walking Windrow Project” involved the set-up of what would become my most successful outdoor Worm Mix system. It was also during this period that I came up with a much more standardized (than typical outdoor beds) indoor batch production approach.

If you are interested in a much more in-depth Worm Mix education, I highly recommend Compost Guy “Ultimate” (look for the link further down). The Suburban Worm Farmer course (one of the resources included with CGU) in particular has a major focus on the topic.

The Worm Mix approach literally saved my little “real world” worm business back in 2009, and the concept it has only continued to get refined and gain momentum since then! I’m super excited to help a lot more people discover the potential of this “natural worm farming” business strategy!

Here is a photo showing one of my countless trips to the post office with my “suburban pickup truck” (aka Jetta station wagon – haha) loaded up with boxes of my “Easy Worm Mix”. The ol’ girl is gone now, and my little guy (in the back seat) isn’t so little anymore…but I’ve always been a sucker for nostalgia!
😉 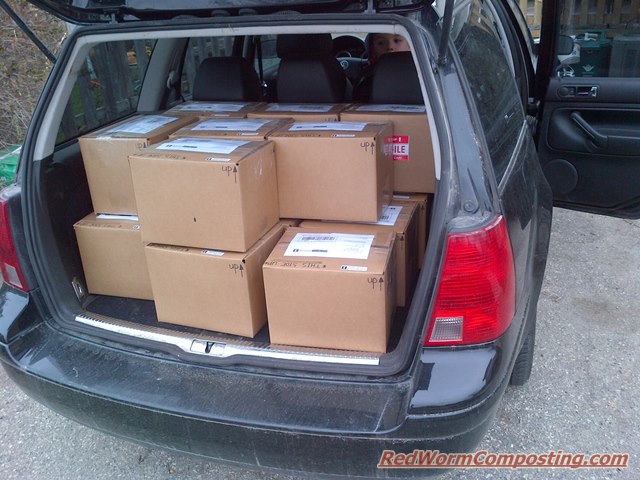 Just so you know – I do have some other (freely-available) resources in the works relating to all this as well.