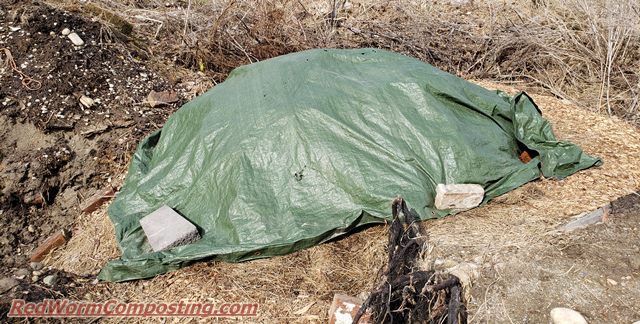 It’s been a “sitting windrow” this past winter, but this baby is nearly ready to start walking again!

Back at the end of August (2018) I started what is easily my largest, most ambitious vermicomposting project to date. At the beginning of July, I had connected with the owner of a 100 acre country property not far from where I live, and he encouraged me to use some of his land to set up worm beds.

As exciting as the idea was – I suspected I would have my work cut out for me (spoiler alert – I DID)!

One of the main goals was to have a large supply of worm castings available for the 2019 growing season. They do a lot of gardening on the property, so I wanted to make sure they were getting something valuable from the arrangement. I knew it would be important to get the ball rolling…and to keep it rolling (at least slowly) during the cold months of winter.

I found a great site for the bed – one that was easily accessible yet well-protected and a little “off the beaten path” (so as not to be in the way).

Creating a large-scale windrow made the most sense – and a “walking windrow” even more sense, given the importance of having an ongoing supply of castings.

[SIDENOTE: For those unfamiliar with the term, a “walking windrow” is simply a windrow that is contructed gradually over time, by adding new materials to one side only. It is a form of horizontal “continuous flow” system – since the worms tend to follow the richest deposits of food, eventually leaving behind zones rich in castings (and much lower densities of worms)]

But I knew I would need to take extra measures in order to have any hope of keeping it active during our Zone 5 winter! The most significant of these strategies involved actually setting the bed up in a trench. I also put a lot of focus on resource gathering in the fall (for more information about the first few months in general, be sure to check out this blog post as well: The Walking Windrow (Follow-Along) Project).

So How Did Things Go During the Winter?

By late last fall I was feeling very much “ready”. I had a good sized trench excavated with a substantial starter bed contructed at one end. Temperatures in the bed were nice and warm (“too warm” in some parts), and I had large quantities of “fuel” (food and bedding) resources gathered nearby.

We had an unusual (for that time of year) cold snap around the time of the American Thanksgiving with “feels like” (“wind chill”) temps dropping down below -20 C. It was my first winter “test” – and I felt a little worried about what I might find when I drove over to check on things.

Coming up the laneway I could literally see steam billowing out from my large manure resource pile and turning into ice crystals (you can see the video I posted on Facebook below). Seemed like a good sign!

The bed itself looked much colder, with plenty of ice on the tarp (what had previously been puddles of melt-water). Down below was a different story altogether, however! The main worm zone was up in the “perfect” range of about 25 C (77 F), while the leading edge (aka “wedge”) zone was up in the “thermophilic” range. 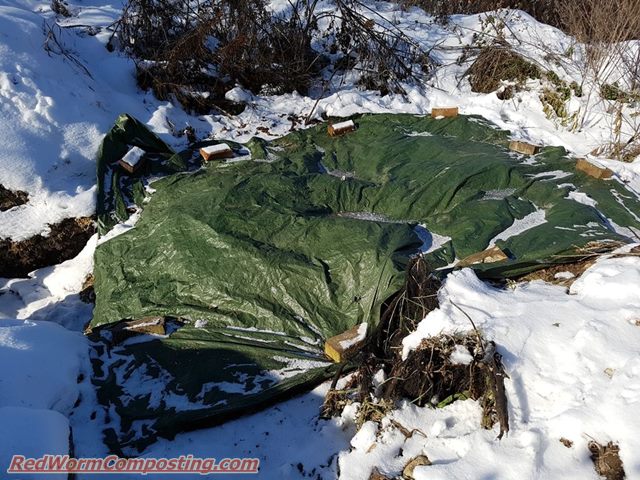 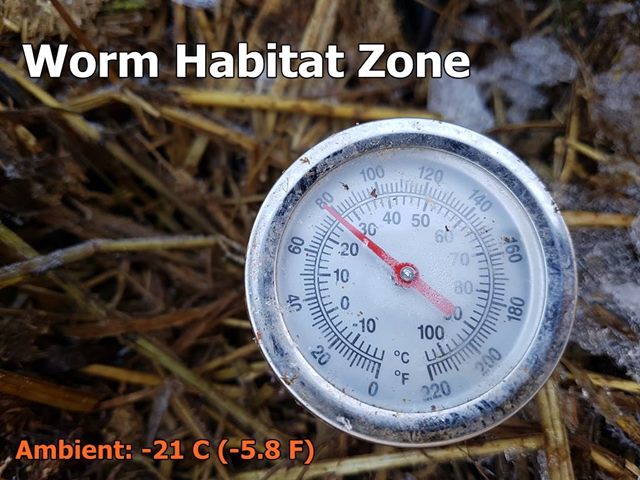 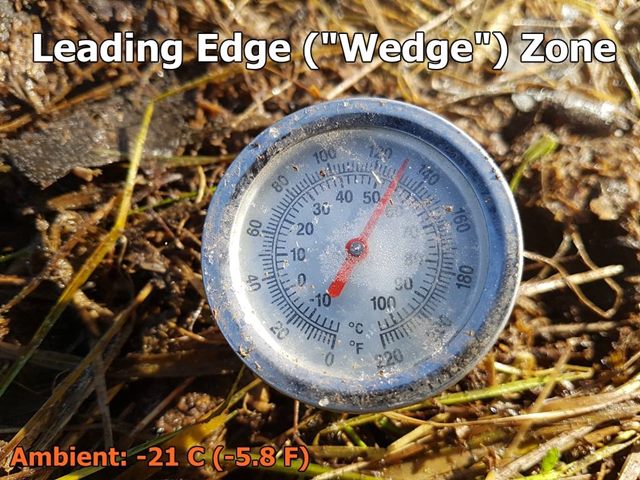 I was starting to feel pretty darn good about my chances of success (which tends to mean there is some cacca on the way! lol)
😎

As it turned out, the weather ended up being fairly mild during the month of December. It got to the point where I almost wondered if we were even going to see a real winter at all (yep…aka “cloudy with a chance of cacca!”). Things got very busy over the holiday season, and I didn’t manage to get back out to the project site for a full 3 weeks.

Everything had changed drastically by the time I did!

In early January the weather shifted very quickly (and severely). The mild weather was replaced by very cold (below seasonal) temps, and – to add insult to injury – there wasn’t even the usual snow cover to provide any insulation. Had I managed even one trip to the project site during the milder stretch, I could have bulked up the bed with a lot of additional manure etc, helping to stimulate the heating process.

What’s cool (no pun intended), is that by the time I did get over to check on it, the heart of the bed was still sitting at 10 C (50 F). Not ideal – but a LOT better than ‘frozen solid’ (like most of my resource heaps by that point – lol).

Still, I knew that a fairly serious rescue mission would be in order if I had any chance of really getting things back on track. So, I got out the Big Guns – and put together a multi-pronged bed-warming plan, that (I’m not ashamed to admit) involved a little “cheating”.

-> I made up some special food/bedding mixes with molasses to help jump-start microbial activity – these were allowed to sit indoors until the heating process had kicked in.
-> I prepared a bag of “hand warmer” packs (meant to be placed inside mitts and gloves to keep hands warm)
-> I filled up some bigger plastic water bottles with hot water right before heading out on rescue day…

…And then hurried out to the project site as quickly as I could!

I dug a hole in the middle of the bed, set in my hot water bottles and dumped in my warm food mixes. I also installed a “chimney” pipe (with holes in it) that would help to provide a supply of oxygen down in the heart of the bed. 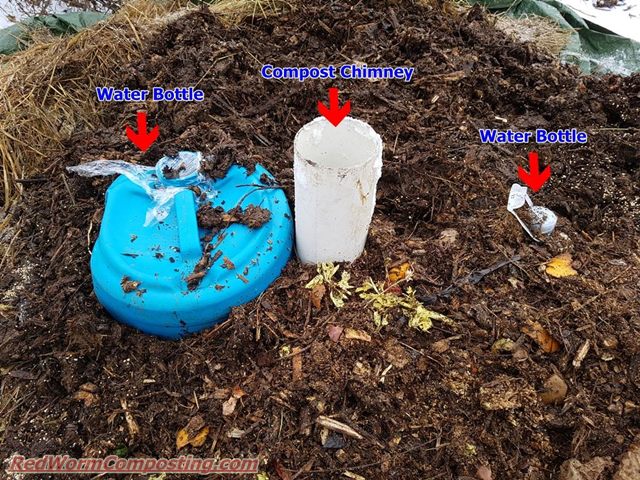 The bag of activated hand warmers was placed up at the top just under a thick layer of dead grass and my tarps (I added two more smaller ones to help keep in more heat). And I left with fingers crossed.

In all honesty, I was very worried that I wouldn’t be able to get things back on track. I know from experience with winter systems in the past, that when bed temps are on a downward trend it can be very difficult to to get them moving back up again.

A few days after my rescue mission I stopped by the bed again to roll out (literally) yet another winter warming strategy. I figured that if I laid some thick clear plastic over top of the dark upper tarp, I might be able to create a sort of “greenhouse effect” on sunny days. I hadn’t planned on checking temps – figured there was no point only a few days after adding everything – but on a whim I decided to take a quick peek. 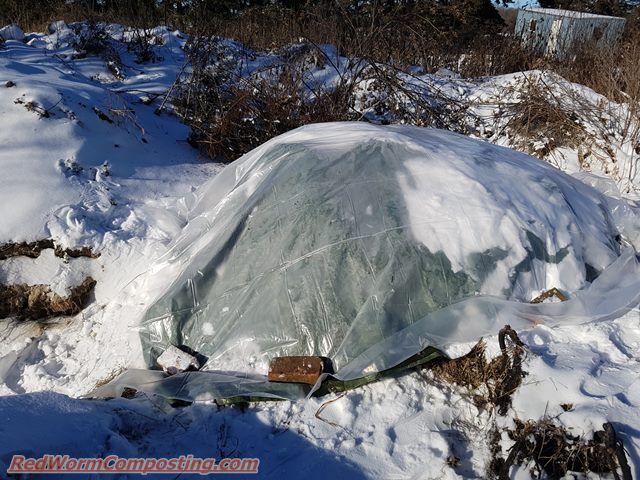 Ambient conditions were very cold by this point – some sort of persistent artic air mass they were referring to as (with just a hint of melodrama) “The Polar Vortex”. This very cold stretch continued for quite some time – and just generally, spring was very slow to arrive this year. But, the bed has remained nice and warm the entire time (since the rescue mission).

I’m convinced it was the combination of having water tanks, the chimney and the greenhouse tarp that provided the “secret sauce” – but I know the overall design of the bed played an important role as well.

Whatever the case may be, one of the major perks of keeping the windrow active has been having access to a very large population of Red Worms at a time when I normally wouldn’t. 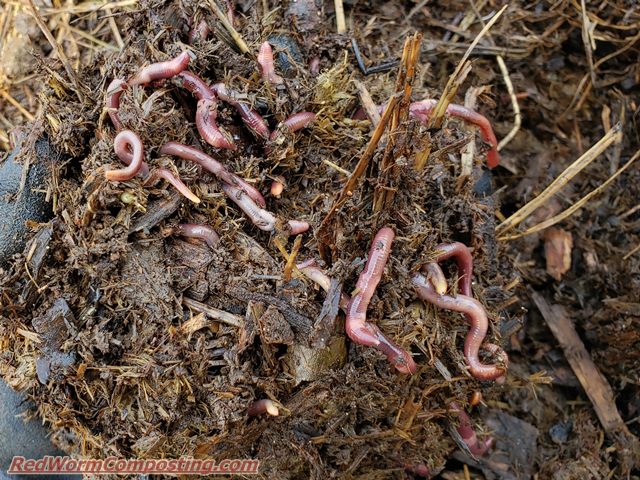 This proved to be vitally important for the roll-out of a brand new indoor production system for my business this year (I needed lots of worms to get all my bins set up), and I was able to open up for the season much earlier than normal (I usually need to wait until outdoor beds have thawed out and worms are active again).

Spring seems to have finally sprung, and I am more excited than ever to see what this bed can do! As I joked in the caption under the first image, it has basically been a “sitting windrow” during the winter (definitely wasn’t any point trying to expand it during very cold weather). But I am now already starting to add new materials to the leading edge to get this bed walking again!

If this is a topic of interest, please consider becoming a member of the Walking Windrow Follow-Along (still heavily discounted as I type this).

It’s only going to get more exciting from here!
😎