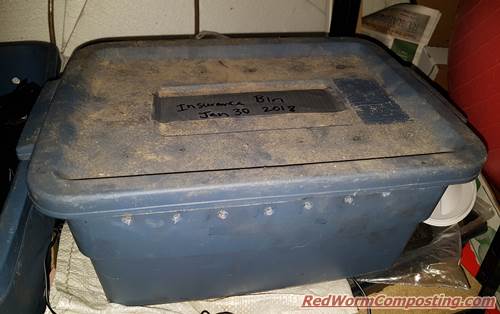 As much as I like to encourage people to try vermicomposting indoors, I do understand that some of us just aren’t in a position to go this route. Maybe there is a spouse or family member who is very opposed to the idea. Maybe we don’t want to risk ending up with bad smells, escaping bugs or other unsavory situations. Maybe there just isn’t enough room indoors. Whatever the case may be, some form of outdoor system might be our only viable option.

This is not necessarily a “bad” thing – outdoor vermicomposting can actually have a lot of advantages, especially at certain times of year. The big problem, however, is that you can end up at the mercy of Mother Nature. With extreme weather comes the risk of losing your outdoor worm herd – especially when using any form of above-ground “worm bin”.

It’s times like these when it’s nice to have a little insurance!

What is an Insurance Bin, and Why Should We Use One?
This is a super-low-maintenance – usually small – “batch” type of vermicomposting system that allows you to easily maintain a culture of composting worms indoors for extended periods of time. As alluded to, the idea is to provide yourself with a back-up supply of worms just in case you end up killing your main “herd” in outdoor (or just generally “other”) systems.

How is This Any Different From Indoor Vermicomposting?
Unlike a typical indoor worm bin, this is a system you can just “set and forget”. It is set up with a LOT of bedding, a moderate amount of food, and a small quantity of composting worms – and then, other than some basic maintenance (making sure temps and moisture are favorable), it can essentially be left alone, literally for months. No risk of “overfeeding” (and all the headaches that can result from that), and it can be housed in a tub that barely even looks like a worm bin. Just put in on a shelf, in the closet or under a bed – and you’ll barely know it’s there!
😉

Back in January, I decided to set up my own “Insurance Bin”. I have a number of other indoor systems, along with plenty of specialized outdoor systems (adapted for climate extremes), so I am definitely not worried about losing any significant percentage of my total worm population – but these little “batch” systems can be fun to experiment with. And of course, I wanted to have an example bin to write about here.

Let’s look at how I set this system up!

As you might imagine, the set-up for a bin like this is incredibly easy. I started by selecting a small Rubbermaid tub (approx 17 litres – 4.49 gal). The size of your bin doesn’t matter – but the way I see it, a smaller bin is easier to “hide” if need be! haha

Apart from being easy to store/hide, plastic tubs are fantastic for moisture retention – very important for a system that is likely going to undergo long periods of neglect.

Important Note: These days I like to put really big air holes in my enclosed plastic worm bins – but this is not the case for my Insurance Bin. Because there is far less going on inside it, and because we want to maintain favorable moisture levels for as long as possible, it makes sense to use a handful of smaller holes. This bin has some in the lid and some along the upper sides. 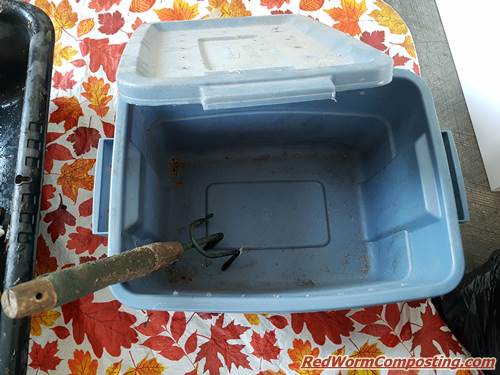 I strongly encourage the use of some form of “paper product” as your bedding – my personal favorite is shredded corrugated cardboard (and that is what I used for this bin), but there are quite a few other good choices as well (eg. drink tray and egg carton cardboard, toilet roll cardboard, shredded or “scrunched” paper/newsprint etc). No one really knows why, but it has been well established that these types of bedding materials can help to increase cocoon production. They also happen to be a good long-term food source.

Before adding the cardboard to the bin I simply moistened it with aged tap water. 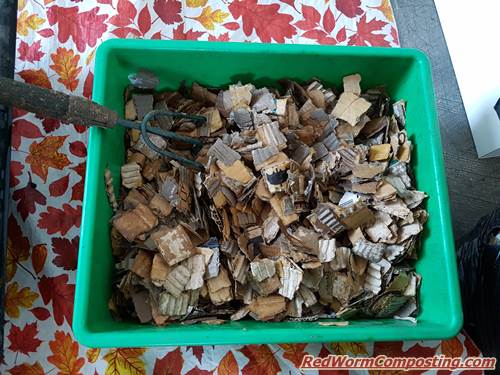 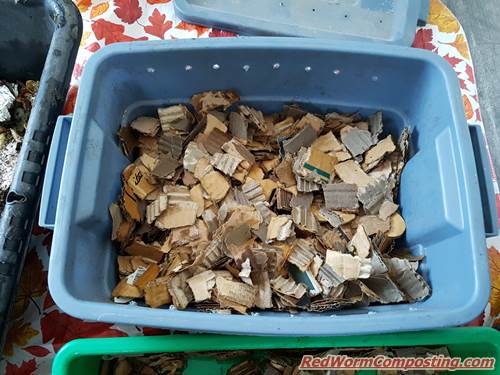 The food material I used was frozen-then-thawed mixed kitchen scraps. Just your run-of-the-mill fruit and veggie wastes, along with a fair amount of coffee grounds. 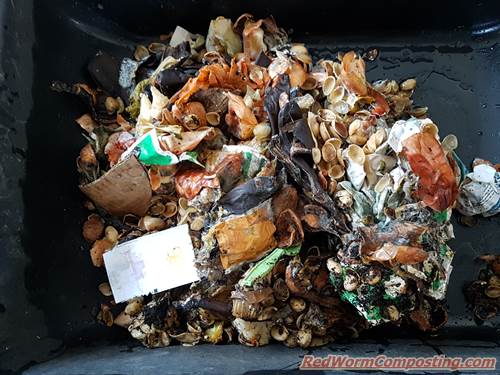 I like to “optimize” my food materials as often as possible. In this case I chopped everything up some more and mixed it really well with some “living material“. 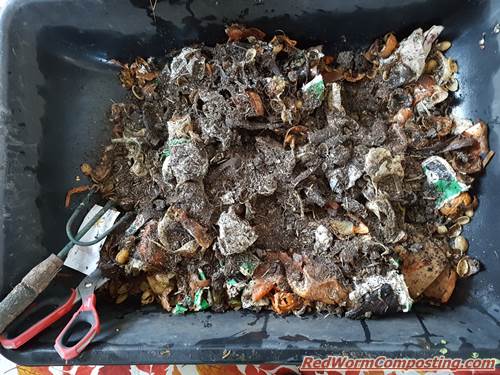 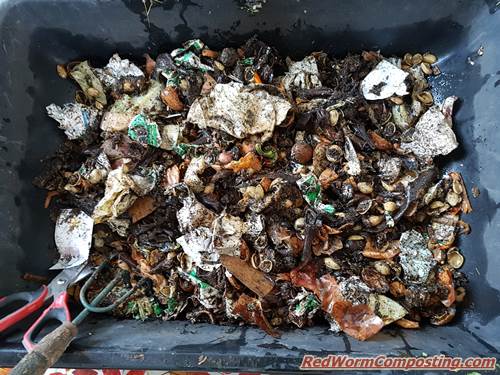 Speaking of “living material”, the stuff I used just so happened to also be rich in small Red Worms, so I used it to basically “stock” the bin as well.

Important Note: There are no hard and fast rules re: how many worms you should add to an Insurance Bin. As a general guideline (for a small system like this) I would suggest adding 30-100 worms (make sure they are proper composting worms) or just some worm-rich material from another active system (just make sure you are not also bringing over any annoying critters like gnats or fruit flies). These types of (composting) worms are specialized for taking advantage of any sort of rich food/habitat that becomes available to them – and a low population density helps to stimulate rapid reproduction even more! 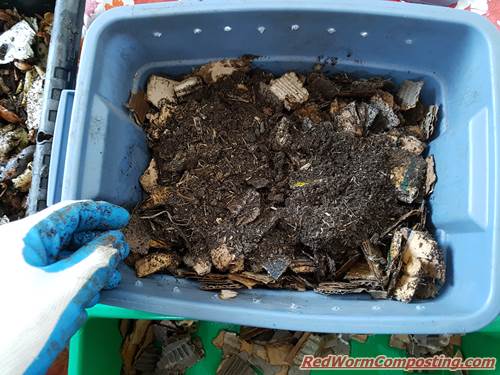 Adding alternating layers of food and bedding works well in my experience – but you should aim to start and end with thick bedding layers so you have a fair bit more bedding than food. 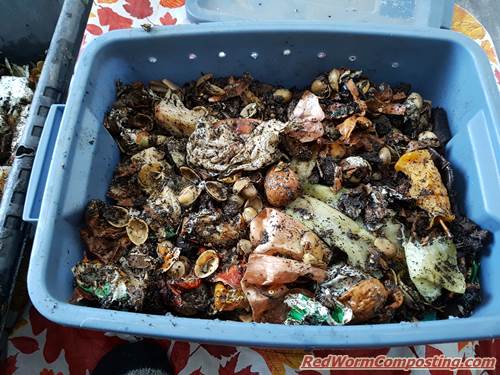 I added more living material along the way as well – but don’t stress if you don’t happen to have any available, especially with a small batch system like this. 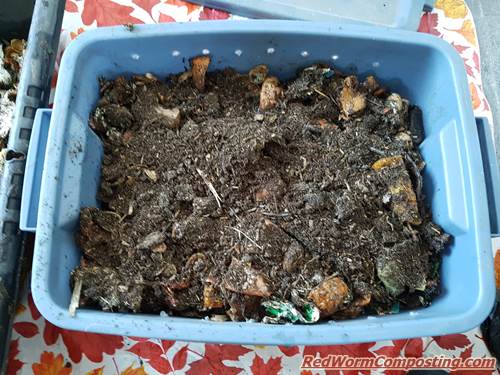 I mentioned starting and ending with a bedding layer. Typically my top layer of bedding is a thick layer of dry cover bedding. Once this was added, I simply put on the lid and placed the bin on a shelf in my basement. 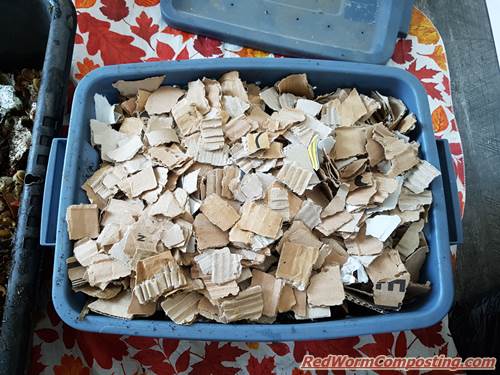 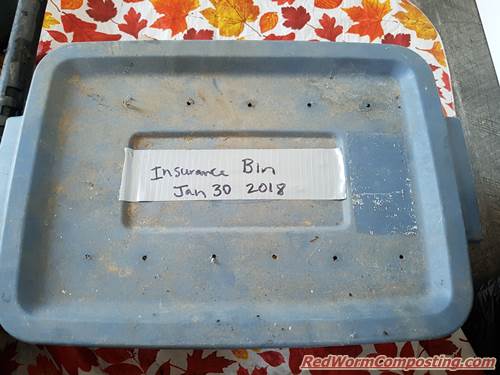 During the past couple of months I have peeked in every now and again, but have done absolutely nothing in the way of maintenance (feeding, water etc). As I expected, the system has been chugging along just fine without any help from me.

I decided to do a bit more digging around today to see what’s been going on down below.

Opening up the lid, I could see that the overall level had dropped somewhat, but there is still a thick layer of intact bedding over top. 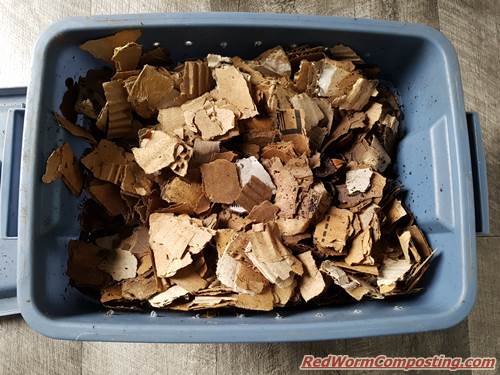 Moving some of this cover layer aside, the worm activity becomes a lot more obvious. Not too surprisingly, there isnt much evidence of there having been any food in the system – but there certainly isn’t any evidence of a starving/suffering worm population either!

Digging down, I found lots of healthy (albeit smallish) worms and plenty of cocoons. There were some springtails visible, but the overall critter population is quite low in comparison to a typical active worm bin. 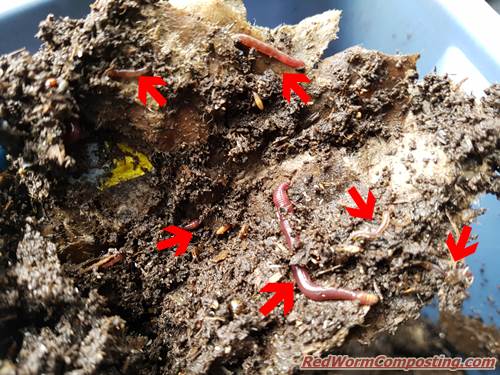 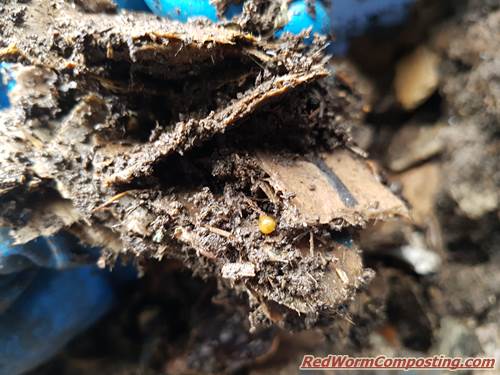 The moisture level seems right on target – and the bin smells nice and earthy. I would have zero worries about leaving this system exactly as-is for at least another 2 months.

Can You Add More Food to an Insurance Bin?
Of course. And one of the things I really like about this approach is that it can be a great way for skeptical people to clearly see how easy and hassle-free an indoor worm bin can be! My only suggestion would be to ease yourself into a more regular feeding schedule. If you decide you want to get more serious with your indoor vermicomposting efforts, actually starting up a serious system (eg. an Urban Worm Bag) would make the most sense!

How Many Times a Year Should I Set Up an Insurance Bin?
If you set it up the way I set up mine, and you are able to keep it in a climate controlled (slightly coolish is even better) environment, it’s hard to say for sure how long you could keep one of these systems going – but at least 6 month is not a stretch at all. Eventually you may want to use the worm-rich material to stock another system (or help someone else get into vermicomposting) – and starting up a brand new Insurance Bin might make sense then.

On that note…it is time for me to sign off for now!
But do stay tuned. Should be interesting to see how long I can keep my Insurance Bin going!
😎