Things have continued to move along nicely with my Urban Worm Bag. The worms are healthy and active, and the level in the system continues to drop.

My most recent (~ 10.4 lb) food deposit brings the grand total (of kitchen scraps added) to just over 39 lb. And it’s important to point out that I’ve actually been mixing quite a bit of “living material” and water in with my food, so the actual weight of material added is quite a bit higher (and I have not been tracking the amount of bedding added either).

Truth be told, I have actually been going a bit easy on the system because I don’t want to make it inhospitable for our toad friend.

I’ve already learned a couple of lessons in that department. For starters, I assumed that all the moisture and humidity in the system would be more than enough “water” for a toad. Apparently not. I noticed he was starting to look a bit sluggish and thinner so I looked up an article on caring for a toad, and they mentioned the importance of providing them with a water dish.

Well that definitely did the trick! He was back to normal in no time after that. 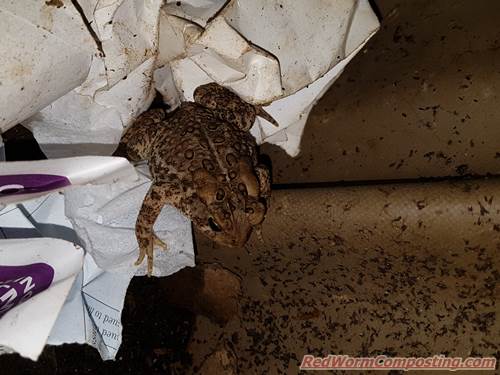 I have also been leaving the lid wide open on one side to improve air flow (mainly for Mr. Toad) – and early on I wasn’t paying enough attention to the amount of bedding piled up on the open side and…well…you can probably see where this is going.

Luckily I had been checking on him regularly, so when I couldn’t find him anywhere in the UWB I immediately started search around the basement. Thankfully I found him fairly quickly, hiding in between two other worm bins sitting outside of the bathroom.

Since that time I have made sure to keep most of the cover bedding pushed over to the other (closed) side, and there have been no other escapes.

He looks like he is getting bigger already – and I can’t say I am surprised. There is a serious abundance of “critter” life within easy reach – he might not even need to eat ANY worms. Either way, the worm population seems to be growing by leaps and bounds, so there is no worry about him putting any kind of dent in it.

Speaking of the worms…I’ve been starting to see more roaming up the sides lately, which is interesting. Not sure if this is in response to the presence of the toad or some other factor. I’m curious to see if this continues now that I’ve added another big batch of food.

– I’ve kept the bottom zipper open part way to keep air flowing in the false bottom zone, and I’ve been pleased with the moisture level of the shredded cardboard down there – moist but definitely NOT wet.

– Temps always spike after I add food, but I’ve been impressed by how quickly they’ve tended to drop back down into more of an “ideal” range. Before my most recent feed they were actually looking surprisingly “cool” (basement itself is quite cool) so it will be good to boost them back up a bit.

That’s all to report for now.
Stay tuned for more updates!
😎