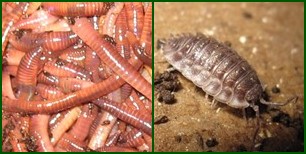 At various points over the years I’ve become interested in the “composting” potential of other worm bin organisms, namely springtails, isopods and millipedes. I’ve always viewed them as important worm allies, and naturally wondered what they might be capable of on their own.

What’s funny is that literally none of my experimental systems in the past have actually worked out for me! It has really only been various “accidental” – more natural – systems where things have started to come together.

My “Uber-Natural” system gave me the first glimpse of what isopods (and to a lesser extent, millipedes) were capable of in terms of processing resistant, carbon-rich materials. More recently, I’ve been utterly blown away by the isopod populations that have been developing in some worm bins that have been receiving fall leaves (and some other bedding materials) almost exclusively for months. And the worms – while maybe not thriving in quite the same way as they would in a typical worm bin – seems to be doing just fine down in the moist lower reaches of the systems.

More and more, I’ve become convinced that this could be a fantastic way to turn resistant bedding materials into a unique type of castings, with very little in the way of actual “food” (N-rich materials) being needed.

Late last week I decided it was finally time to start up a brand new experimental system, better designed to take advantage of the talents of these two organisms.

I started things off with an extra-thick “false bottom” zone using a lot of coarsely-ripped corrugated cardboard. The image below is a bit misleading, but this zone likely occupied 1/3 of the total volume (at least during the set up process – likely some settling and compression that reduced this later). The idea here was to create nice habitat structure, and a longer-term food source for the worms. 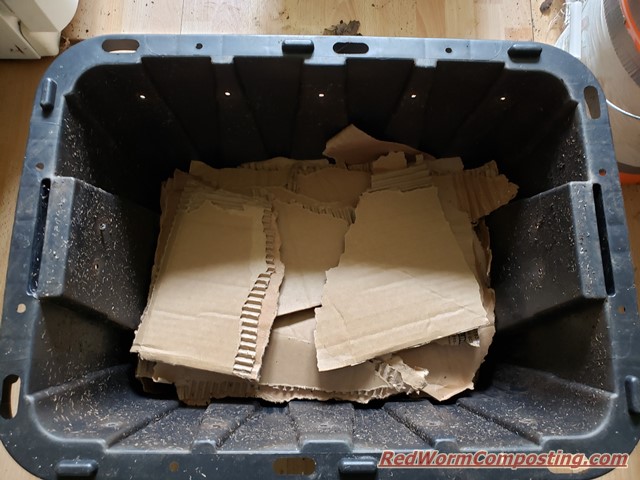 To boost that food value right out of the gates, I decided to sprinkle in some dry poultry feed. This is often something I will do with my “set it and forget it” types of systems since it helps to create a zone down in the bottom of the bin that can keep the worms going for a long time without much in the way of assistance from me. 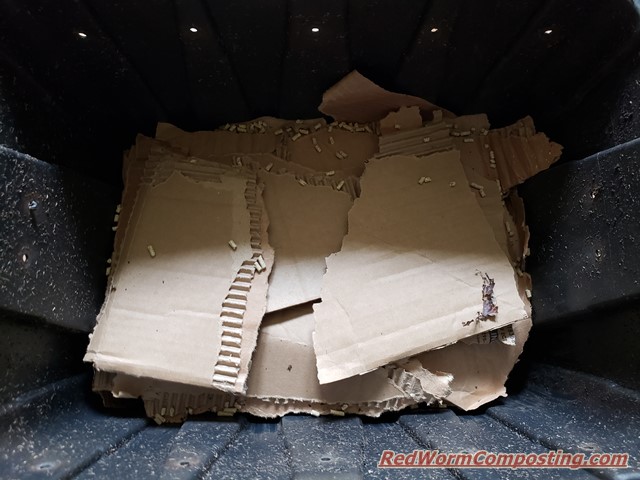 Next, I added my first layer of dry leaves (and other C-rich debris). I have multiple large bags of fall leaves (etc) that have been sitting for quite some time now – plenty of potential fodder for my isopod army! lol 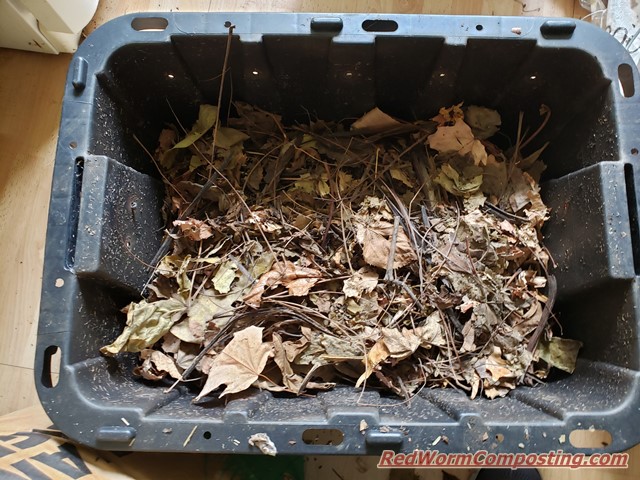 Next came my initial “worm zone” – this was just some worm-rich, compost-y, stuff from the bottom of one of my other bins (where lots of isopods and worms have co-existed). I added a “Cool Whip” container worth (likely about 750 ml) of aged tap water at this point. I knew the worm habitat material would soak up and hold a fair bit of the water, and generally slow the run off down to the bottom of the bin – hopefully helping to get the false bottom cardboard damp more quickly. This is a case where I am definitely not too worried about some pooling in the bottom of the bin. Not only will the cardboard wick a fair amount up over time, but since we’re not really adding food to this system the likelihood of ending up with a foul, anaerobic swamp down in the bottom is a lot lower (I’ve even poured in more water since then – will circle back to this later). 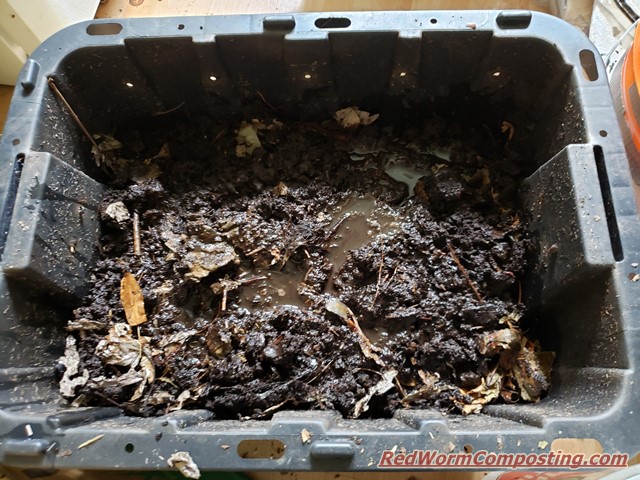 Gathering isopod-rich habitat material was a piece of cake. Like I said earlier, the populations of these things developing in multiple systems has really been blowing my mind. I don’t have any solid data to support this, but I think it is safe to say they breed faster (maybe a LOT faster) than Red Worms! They also tend to get concentrated in the upper zones of my bins where there is a lot of leave litter, so gathering what was undoubtedly “hundreds” (if not more) really only took a matter of seconds. I will have to shoot a video at some point just to demonstrate what I’m talking about. 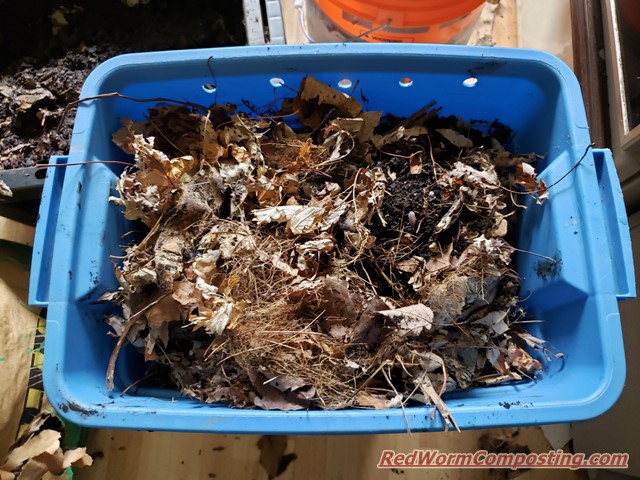 After the isopod-rich material was added, I added a nice thick layer of the fall leaves and debris. I assumed this would be the last layer (for now)… 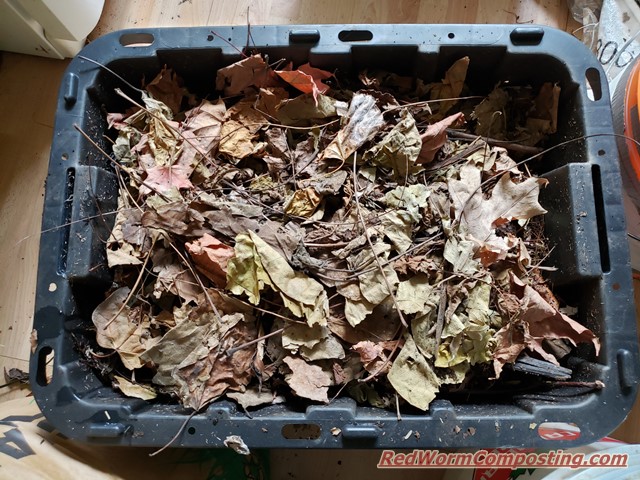 …but then I found an interesting supply or organic matter I thought might be fun to test out!

My dad has a big catalpa tree in his yard – and just so you know, some of that other “debris” I keep mentioning includes tough catalpa pods (I will be very interested to see what the isos can do with these). I noticed there were a lot of dead (mostly dried up) catalpa blossoms on his driveway, so I thought it would be interesting to collect a bunch and add them to this new system (and one other system).

This is a material that likely leans slightly more towards “food” than the fall leaves – but one that is much more up the isopods alley than something like kitchen scraps. 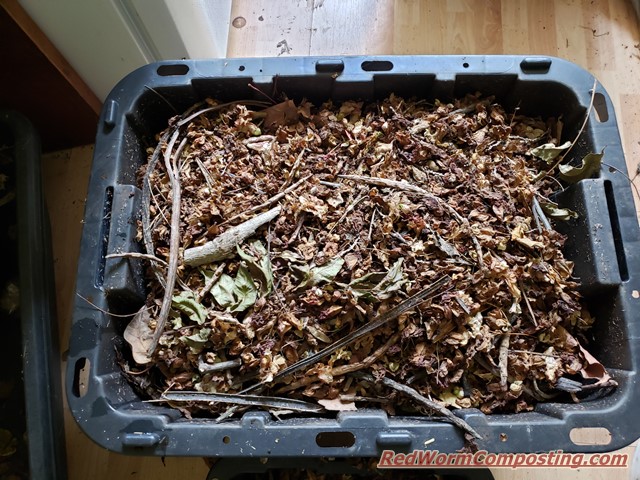 With the bin officially topped-up, it was time to put on the lid (with a date reminder for future reference) and leave the critters to do their thang. 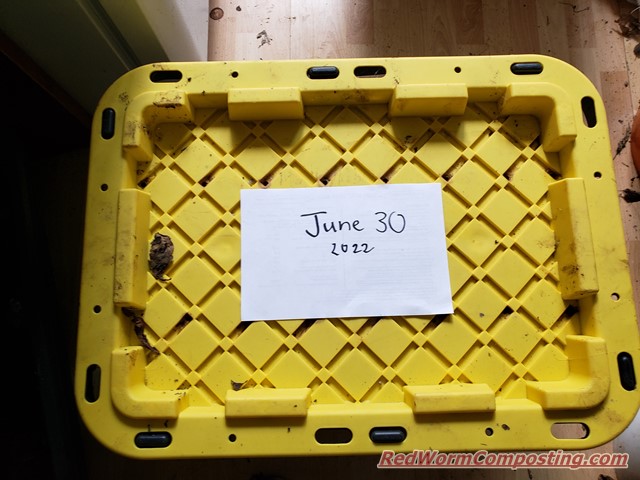 **UPDATE**
I had the opportunity to check up on the system yesterday (July 5th), and was very pleased to see how nicely things are coming along already.

The overall level had dropped already (the upper air holes were visible), and I found loads of isopods milling about in the upper leafy-blossom zone. 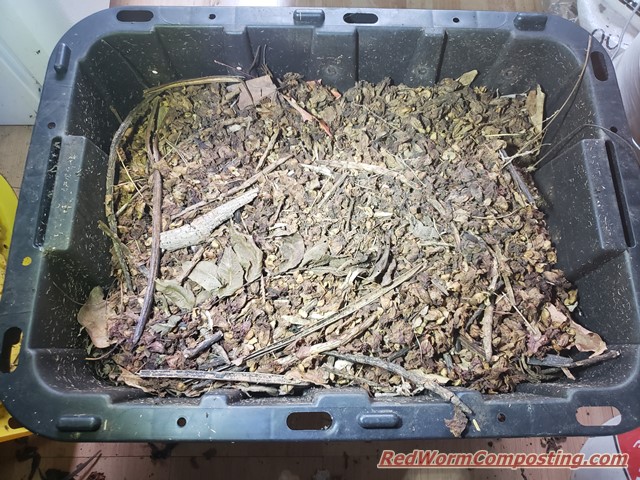 Digging around a bit, it looked as though the false bottom zone is getting nicely moistened and the worms have already started moving around a lot. I was actually surprised by how little pooling there seemed to be in the bottom so (as touched on earlier) I actually poured a bit more water directly down into this zone. I like the idea of having a bit of a reservoir down there since it should help to keep the upper reaches of the system nice and humid for the isopods, but without any real risk of creating hazardous conditions for the worms.

Before closing the system back up I topped up the system with more of (my ample supply of) dry fall leaves ‘n’ debris. 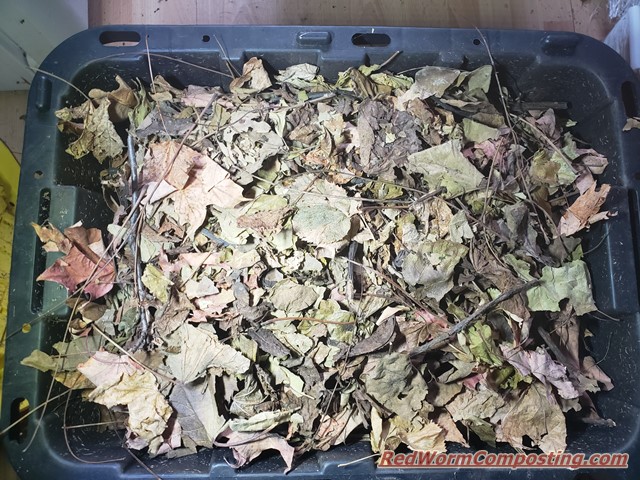 I know I tend to always be “excited” about new experimental systems, but I really feel like I am breaking new ground with this one – and am especially eager to find out what happens in this bin over the next 2 to 3 months!

One of the ways I have gone wrong in the past with isopods is by assuming I can just add kitchen scraps the way I typically would with a worm bin. This just doesn’t work – and I always see a major decline in the isopod population over time.

The “secret sauce” for isopod success seems to be:
1) Using almost-exclusively carbon-rich materials, with very little in the way of actual food.
2) Maintaining ample amounts of natural (C-rich) organics, like fall leaves, in the system.
3) Damp (but not wet) conditions.
4) Warmth – this one has been a bit of a surprise for me (since I assumed isopods thrive more in cool-ish conditions), but the populations in my systems exploaded once the warm weather of late spring and early summer arrived.

Stay tuned for more updates! And don’t hesitate to let me know your thoughts in the comments section below.
😎