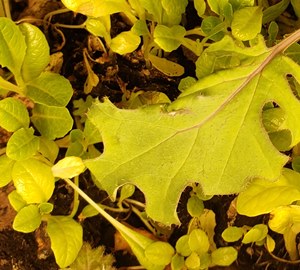 Last December (2021) I wrote about a weird and wacky experimental system I had started up using substrate and leftover young plants from some (vermi-)microgreens trials I had been running in the fall.

I wanted to see how the system would evolve over time with the worms and cocoons and all that nutritious plant matter + substrate material. I had mixed everything up, covered it with plastic and put it in a fairly low light spot, so I assumed the remaining plants would just die off and become a food source for the worms.

As it turned out, a lot of them started growing up toward the light, so I felt inspired to see if I could create a sort of “vermi-terrarium” type of system. 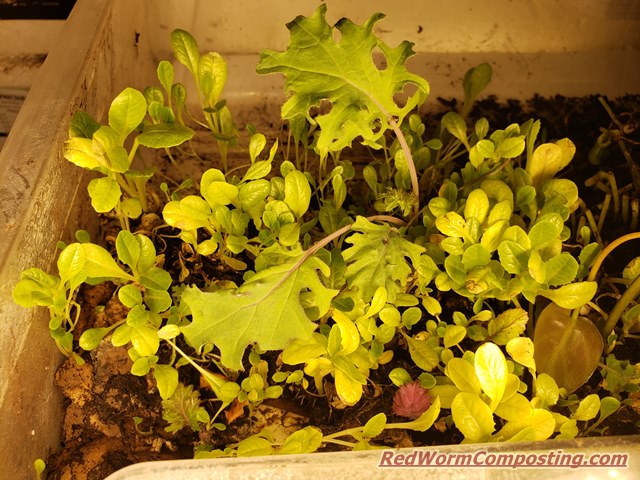 I ended up keeping the back section (where there weren’t many plants) covered with plastic for moisture retention, and continued to add leftovers from microgeens trials (along with periodic waterings) – but mostly left it alone.

At some point along the way (it’s all a bit hazy now lol) I ended up upgrading my grow light to a 3-bulb system and – more recently – decided to stop growing microgreens in my styrofoam chamber the system was sitting on. I moved the chamber out of the way completely, placed the system on the chamber lid positioned over my heat mat, and positioned all 3 lights over the remaining plants.

[OK, that was probably a bit confusing to read…the big take away is that the plant ‘n worm system is now warmer, and with much better lighting than when I got started.]

It has been fun to watch as different plants have come and gone in the system over time. There was a point where I actually had some mini sunflower plants literally blooming (kicking myself for not taking any pictures)! The philodendron cutting I added last December still seems to be alive and well, but hasn’t really grown much. The real winner – and a bit of a surprise for me – has been Russian Kale. I have 3 plants with leaves similar in size to what I would see growing in an outdoor garden!

So big in fact, that I couldn’t even seem to capture a decent photo of them!
😉 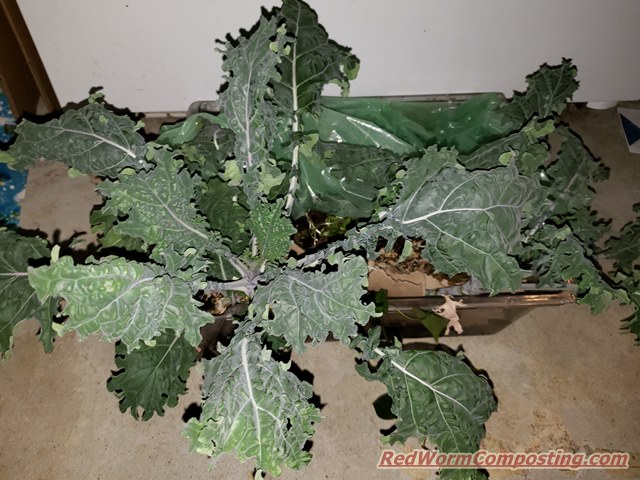 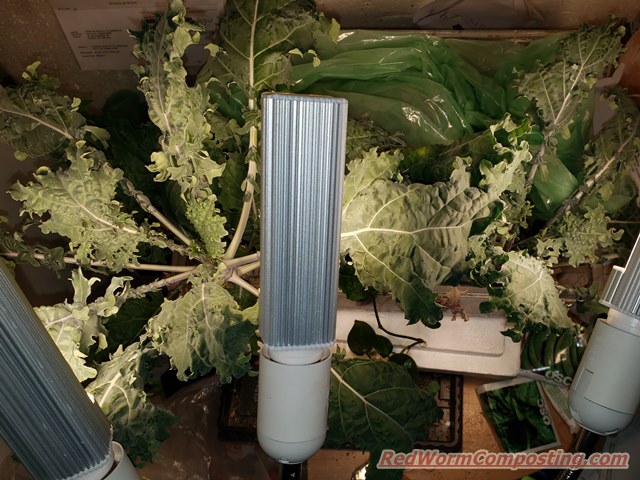 The mat of organic matter and plant roots in the bottom has basically become a solid mass by this point. Any time I pour in water – even to the point of it pooling about an inch up the sides – it is amazing how quickly it wicks it all up! 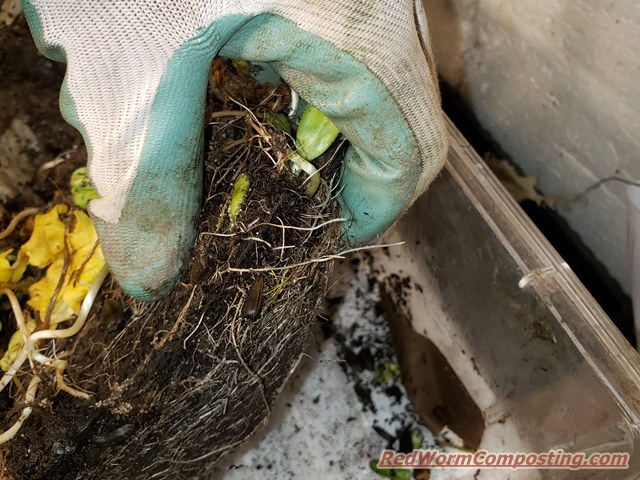 I used some jute grow mats for my most recent sunflower greens trials. 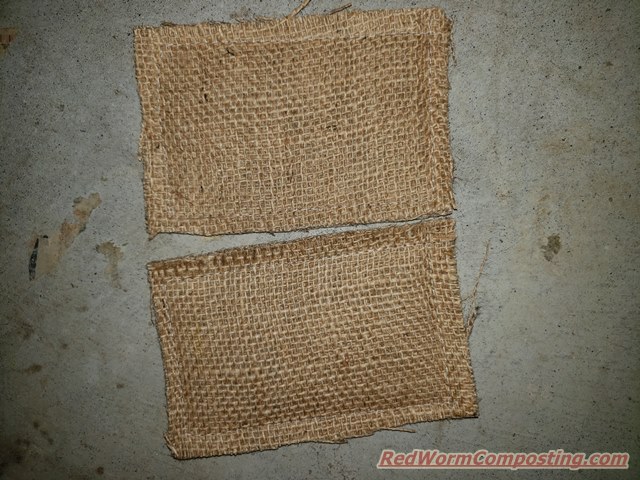 Worms seem to really love this material, so I was excited to see what they thought of the used mats. As expected, quite a few worms seem to have taken up residence in them and (as you can see in the image below) there’s no shortage of roots growing through them as well. 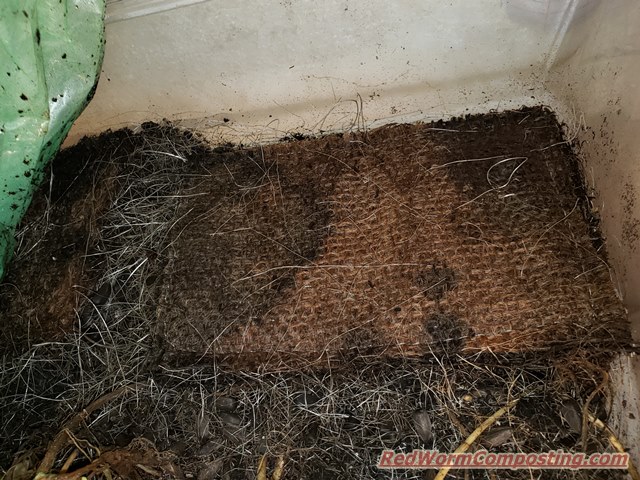 Not too long ago, I decided to add a bunch of shredded cardboard/paper and then dump in a pretty sizable deposit of compostable kitchen scraps. I seem to recall adding a smaller deposit of scraps at some point, but for the most part I’ve really only been tossing in dead leaves from the plants and other plant matter from the system as well. So, this was definitely the first major typical-worm-bin type of feeding the system has received. 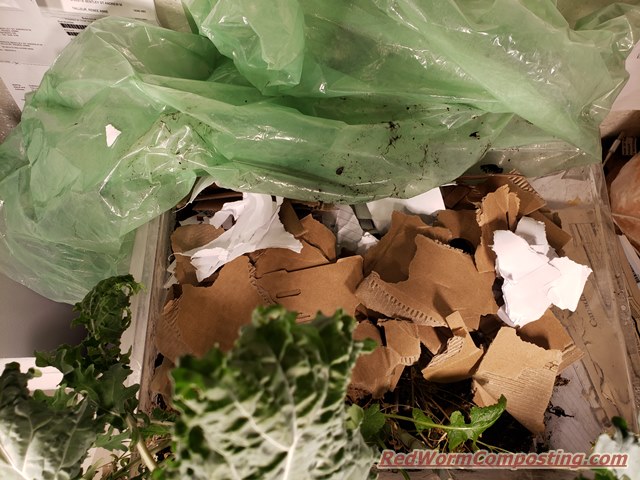 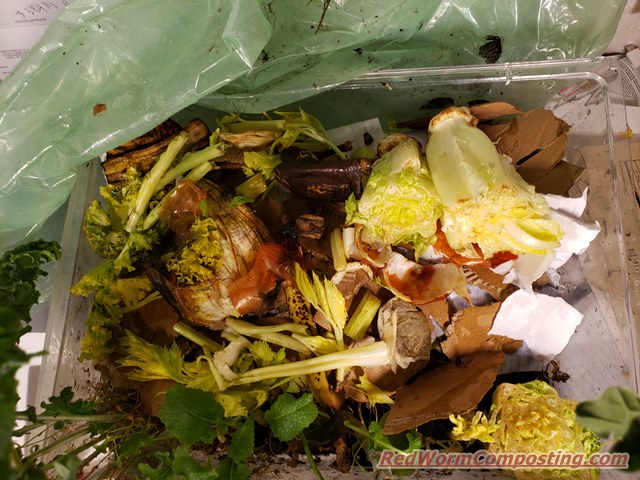 I had some celery and lettuce bottoms among my scraps, so I thought I would try to actually grow them in the front section (under the lights). 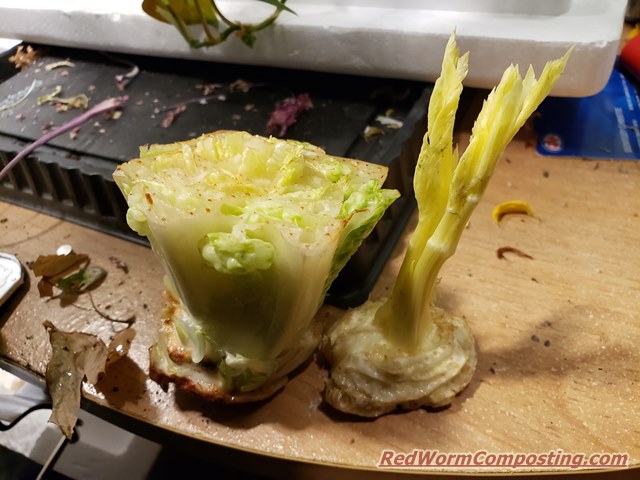 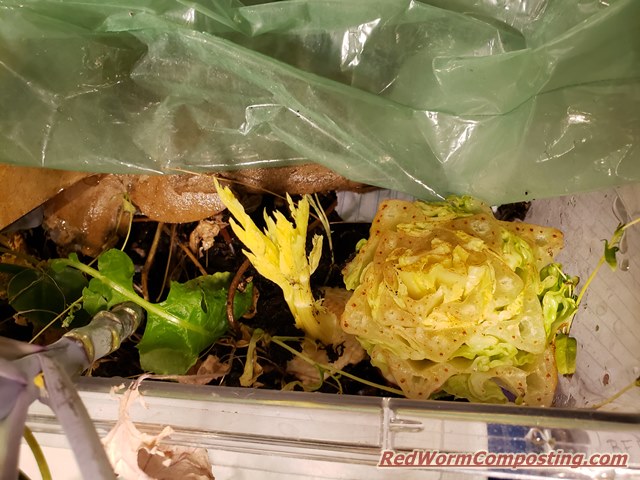 Long-story-short, it seems the warm temps and all that microbial (and worm) action going on was too much for the scraps. The cuttings failed quite quickly, and I found no trace of the other scraps when I checked last week.

Not too surprisingly, I found plenty of healthy looking worms in the remaining bedding materials. 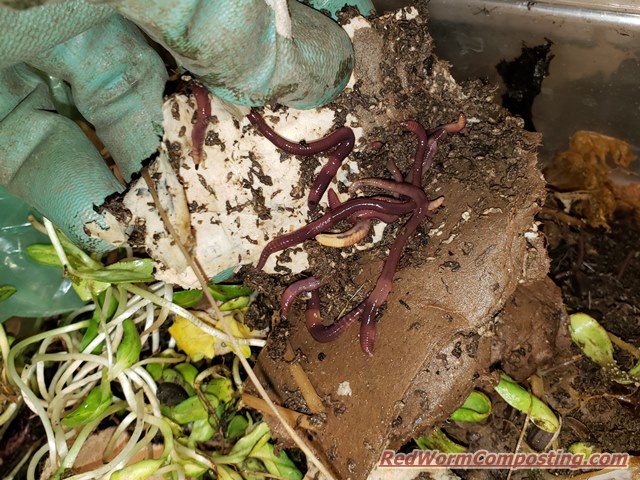 You may notice a lot of sunflower seedlings in the worm pic. Many of these have grown up from the leftover microgeens material I was tossing in. I’ve been yanking a lot of them and just leaving them in there as a nice food source for the worms…and the other day this got me thinking! I still have heaps of sunflower seeds (I bought a huge bag of them last fall), and it is clear they aren’t hard to germinate in a warm, wet environment. So, I got curious about actually testing them out as a food (the seedlings) and habitat (leftover shells) material.

I ended up dumping in handfuls of them late last week – and things are already starting to get pretty interesting in there!

I also thought it might be fun to try germinating some other seeds in the plant growing section, so I sprinkled in some radish, spinach and “Scarlet Runner” bean seeds. So far it only seems to be radishes coming up, but we shall see what happens.

This is maybe one of my weirder experimental worm systems (and that is saying a LOT – haha), but I am having a lot of fun with it!

That being said, it’s not all fun and games. So far, this has already been an effective (and surprising) demonstration of the potential of smaller integrated systems – and I am very interested to see how things develop in the weeks ahead.