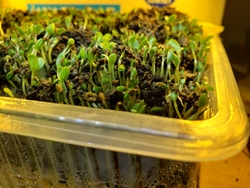 Back near the end of September I learned about someone who has been using composting worms in the grow trays for his microgreens and baby greens (and singing their praise in his YouTube videos).

This seemed really interesting and unusual to me, and of course resulted in me wanting to test it out for myself!

I set up two small trays to grow a mix of salad greens, and added 15 Red Worms to one of them. For all the nitty gritty start-up details be sure to check out my original blog post about this: “Worms in Microgreens Trays?“.

Germination and seedling growth in both trays seemed to proceed quite well, with no earth-shattering differences between the treatments. I also didn’t see any obvious indication of worm activity either. In fact, by yesterday – Oct. 21, which just so happened to be exactly 4 weeks in – I was getting a bit worried about them, so I figured it was probably a good time to stop the experiment and take a look “under the hood”.

The next two photos show the appearance of the two treatments by the end of the experiment. One fairly obvious difference was the fact that the no-worm tray had fewer, but larger (on average) plants, while the worm-stocked tray had a higher density of smaller plants. Overall, plants in both trays seemed quite healthy. 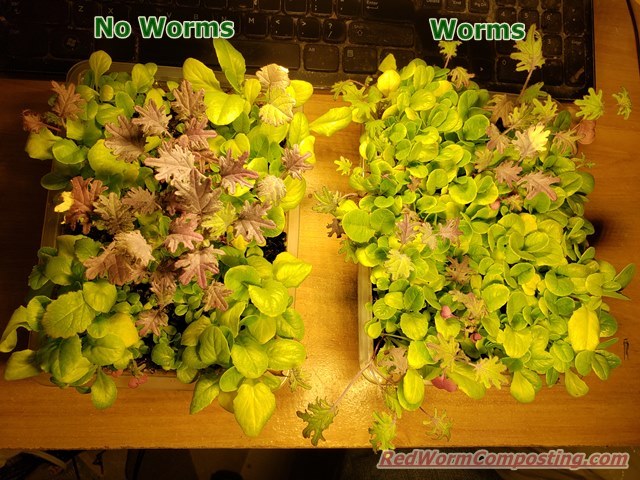 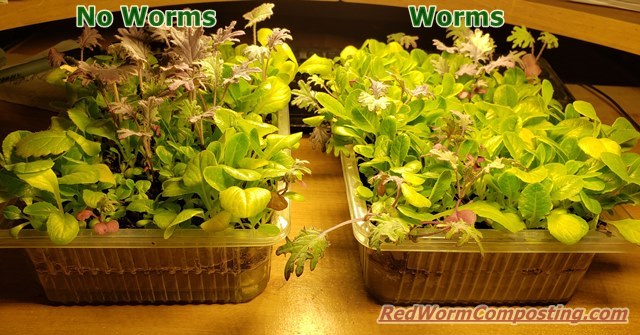 When I first flipped the trays over, it actually looked like the root growth in the no-worm tray was more extensive… 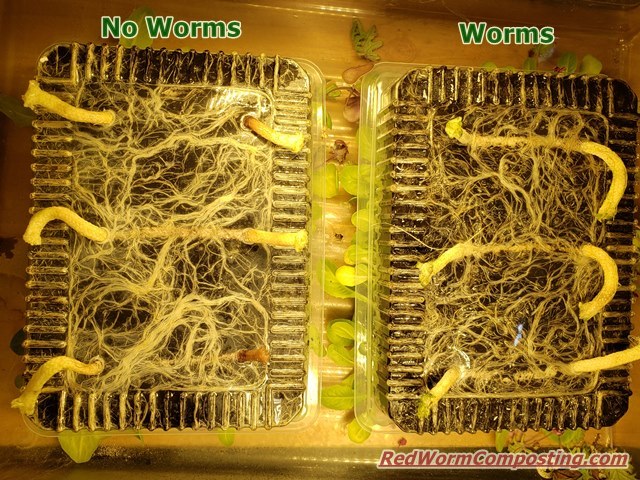 …but once the tray itself was pulled off it was clear there was in fact more root growth in the worm-stocked tray. This boost in root growth seems to be a pretty common “side effect” when castings and castings tea are applied to the root zone of plants, so this may help to explain why it seemed to happen in this experiment (since the worms would have obviously been excreting castings in their habitat). 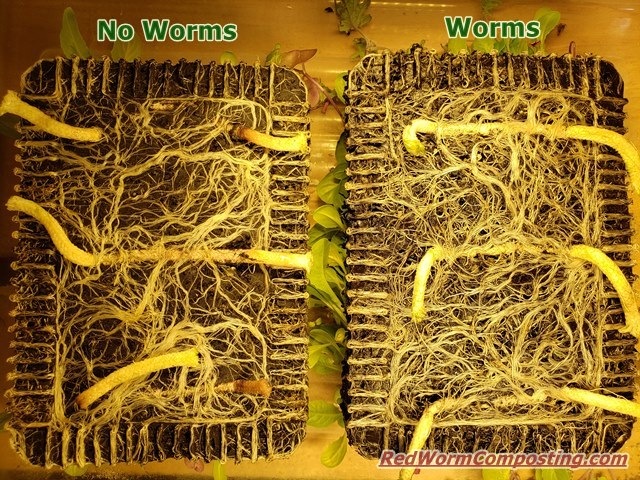 Seeing the dense growth of roots, and how limited the habitat space was in general, I was feeling increasingly pessimistic about the worms’ chances of survival. So, I was pleasantly surprised when I started breaking the root-loaded substrate apart and found my first healthy worm! As it turns out, I managed to recover ALL 15 of the worms I added – and they seemed very healthy and active. This was a major surprise for me – I figured that, bare minimum, there would be at least a handful of missing worms.
😎

NOTE: If you are wondering about the brown color of the Red Worm in the photo below, it is simply due to the LED grow lights I have shining over top (same ones used for the greens). 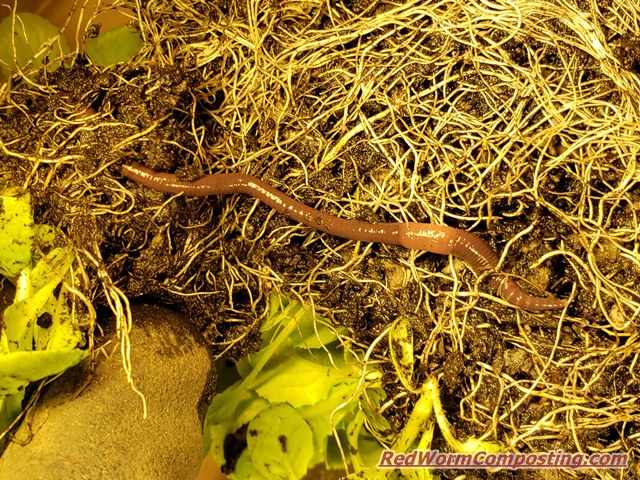 A fairly quick search through the growth substrate uncovered a total of 9 cocoons as well (all recovered worms and cocoons were added to my Coffee Can system). I have no doubt there were a fair number that remained hidden as well. 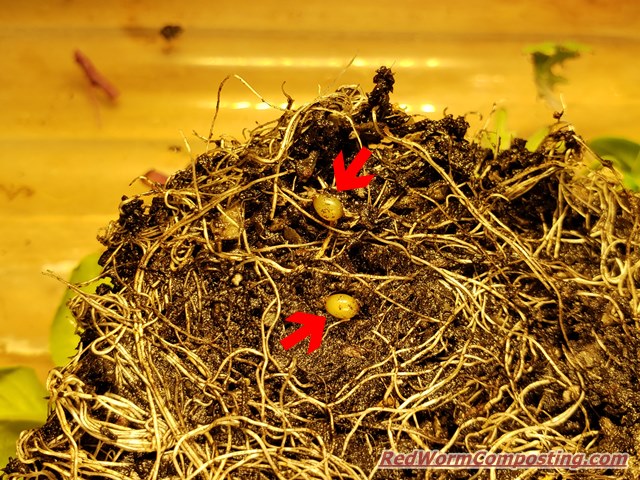 Since I don’t currently have a normal sized worm bin going here at the moment (I keep most of my active indoor bins at my dad’s place), I decided to create a makeshift system using an old refigerator crisper drawer (what I dumped the grow trays into). Apart from the stuff from the worm-stocked tray (minus the worms and 9 cocoons), I added the contents of the no-worm treatment, some water, and some shredded cardboard and “scrunched” paper, before mixing everything up.

NOTE: Breaking apart the growth substrate from the no-worm treatment, it became even more obvious that the network of roots was quite a bit less extensive than in the worm treatment just based on how easily everything broke apart.

For a cover, I simply added a small plastic bag over top. 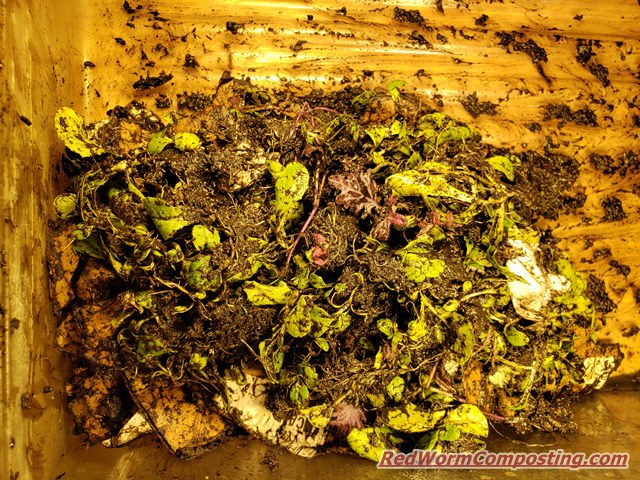 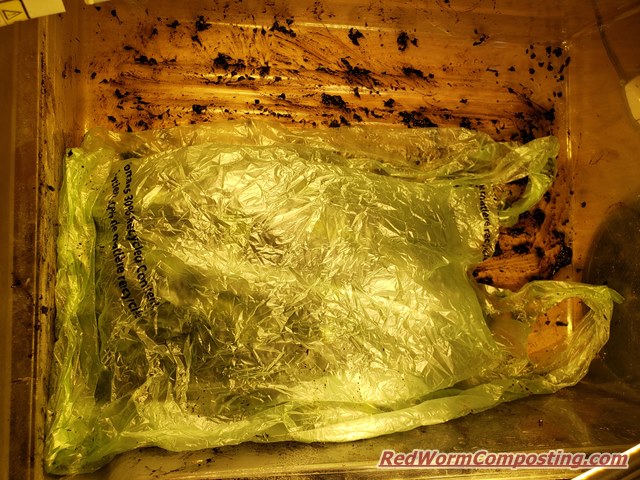 This was a very simple experiment and I certainly won’t be drawing any major conclusions from it – but the results were very intriguing (and somewhat surprising) nevertheless. The idea of worms thriving in a gravel-based grow bed (eg aquaponics) makes sense for various reasons, but I really wasn’t expecting the worms to thrive the way they did in what was basically a dense, water-logged, soil-based habitat. I am eager to test this ‘plants + worms system’ approach further, ideally over a much longer period of time. I’m curious to find out how the worm population will develop and what the long-term impact on the plants will be.
Stay tuned!
😎