How Harmful are Vermicides in Manure? 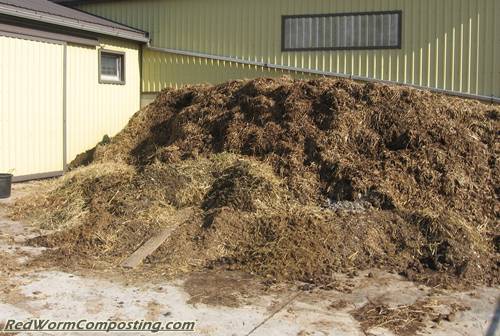 As I’ve written many times here on the blog, aged manure is hands-down one of the best materials to add to a vermicomposting system. Horse manure, in particular (especially when mixed with bedding materials), happens to be my personal favorite! Some of the most successful populations of Red Worms (highest densities, largest worms) I’ve ever encountered have been living in old outdoor heaps of horse manure, such as the one pictured above.

Manure use is not without certain “risks”, however – a prime example being the potential presence of of deworming medications (frequently given to various types of livestock). In all honesty, I’ve never really worried too much about this myself – likely due to the fact that I just haven’t I seen any evidence of worms being killed off in any of my own manure-fed systems or in the heaps where the worms “naturally” occur. Quite the opposite in fact!
Nevertheless, I’ve received a lot of emails about this issue (many of them in the past couple of months strangely enough), so it’s clear that quite a few people are concerned about this.

While there doesn’t seem to be a LOT written about this topic, I was recently pointed in the direction of two interesting info resources and thought some readers would find them valuable as well.

Firstly, I want to thank Carolyn O. for sharing the following article: Is Horse Manure Safe For Organic Gardens?

I was happy to see what the overall conclusion/recommendation was basically in-line with the advice I typically give people re: using manures – i.e. when you let manures age outdoors for a period of time before using in vermicomposting systems you are far less likely to encounter any issues (I’ll talk a bit more about some other issues with fresh manure in a minute).

Here is an interesting blurb:

Fortunately for gardeners and animal owners, most research to date indicates that Ivermectin, the vermicide most frequently given to horses, cattle and sheep, breaks down quickly once it is excreted. Several studies have shown that Ivermectin degrades rapidly when manure is hot-composted or exposed to sunlight, and somewhat less rapidly when manure is simply piled up and left to decompose.

A study of Ivermectin-treated sheep found the half-life of the chemical in sheep manure to range from seven to ten days. Because of quick decomposition, Ivermectin preparations given to animals have not been found to build up in manure-amended soil.

It contained some reassuring words as well:

The most common wormer used is known by the brand name Ivermectin®
made by the Merial Company. Merial’s research shows that the active chemicals in Ivermectin® are deactivated when manure is exposed to sunlight. Equine studies show that 95 percent of the active chemicals in Ivermectin® are deactivated in the horse before being passed in the feces. Leading experts in vermicomposting believe that the concentration of Ivermectin® in the horse manure is not high enough to seriously injure Eisenia.

It’s really important to remember that there can be other dangers associated with using fresh manure (or generally, manure that hasn’t been exposed to outdoor conditions). Likely the most significant of these is ammonia volatilization. Ammonia gas is very toxic to earthworms, and will kill your herd in no time flat even when present in relatively low concentrations (especially dangerous in enclosed systems). Another potential hazard with certain types of manure (and manure handling practices) is salt content. Earthworms also tend to be quite sensitive to relatively low salt concentrations.

In other words, don’t necessarily assume that it’s vermicides killing off your worms if you encounter problems with certain batches of manure – especially if the manure is relatively fresh!

Here are my bottom-line recommendations for using manure:

1) If you plan to use manure as a starting material (habitat) for a vermicomposting bed make sure it is VERY well aged (outdoors) – at least 2-3 months old (preferably having undergone some sort of “hot composting” stage).

2) If you are feeding manure to a well established (open) system – especially if it’s quite large – you can almost certainly get away with layering much newer manure on top since the worms can simply avoid it until it is “ready”.

3) Unless you are very experienced with using manure as a “worm food”, I don’t really recommend using it in enclosed plastic bins at all. The potential risks associated with ammonia release are just too great in my humble opinion.

Anyway – interesting topic for sure! Please share your thoughts!
8)