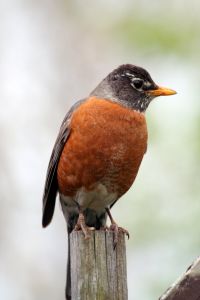 As a child I was a very avid birdwatcher – imagine the passion I now have for vermicomposting, but focused on birds instead. I was sure I was going to become an ornithologist when I grew up.

It’s funny remembering back to those days, because this year I have officially declared war against the birds – ok, maybe not ALL the birds. Just the ones that threaten the well-being of my outdoor worm population. The American Robin is leading the way in that department.

As I wrote yesterday, I’ve expanded my vermicomposting trench systems. Needless to say, when I first started seeing Robins out in my trenches gobbling worms like crazy I was NOT impressed!

Apparently these birds are supposed to be territorial, with only one bird dominating a given area. Well, I guess the worm buffet bonanza my trenches offer these retched avian marauders has led to a new set of rules being established – I’ve seen multiple Robins in my trenches at once, with no signs of aggression towards one another whatsoever.

Along with the new set of Robin rules has come a new set of rules for yours truly!
{insert evil grin}

I’ve been starting to feel like Elmer Fudd fending off ‘wascally wobbins’ in my yard, but thankfully I haven’t resorted to any form of violence…yet. Well, ok – I have been throwing tennis balls at them, but never really at them – just in close proximity to them.
😆

There’s been one bird in particular that’s got an unbelievable amount of nerve – or stupidity, depending on your perspective. Judging by his lack-luster coloration, I’d say he is a yearling (born last spring) – this would also help to explain why he seems to have a death wish.

I’ve literally run after this bird yelling with fists-a-shakin, only to have him fly a few feet off and continue on his merry worm-picking way. If my property wasn’t so exposed (I’m sure my neighbors already think I’m a complete nut)…well, you can let your imagination go wild on that one.

Ok, I’m mostly kidding – these birds have been driving me bonkers, but I’ve actually been having some good success keeping them away. The ‘tennis ball method’ has worked quite well, but thankfully I seem to have hit upon some passive methods that are even more effective!

I noticed my neighbor had laid down shiny silver and red tape over rows of new seedlings. Doing a bit of research online, I discovered that this is a strategy for keeping birds out of your garden (apparently the red flashing reminds the birds of fire, which they are instinctively afraid of). After learning the cost of said tape (I’ll keep my arm and leg, thanks very much), I decided to make my own version. 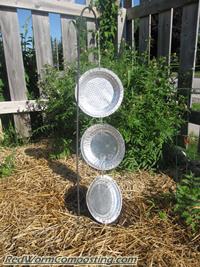 I made some scarecrows using shiny aluminum pie trays hanging from upright supports. It is quite breezy around here, so my hope was that the flashing and banging of the trays to help to scare the birds away. This method seemed to work quite well – my tennis balls were starting to feel neglected.

It certainly hasn’t been fool-proof though. Once birds get used to these sorts of deterrents, they’ll often simply start ignoring them. On calm days when the trays aren’t banging around as much the birds also seem to feel more at ease and back to their usual worm-eating ways.

The real turning point came after I noticed that the robins weren’t picking at my sandbox trench once straw was added over top – the same was true for one of my other straw-covered trenches.

I recently added straw to my main trench as well and I’m happy to report that the results have been fantastic! I think it has something to do with the birds feeling uncertain about their footing while walking on the straw. Interestingly enough, when I had a thick layer of grass clippings on the windrow, Robins were on it like white on rice. Where do Robins normally hang out and feel safe?

The lawn, of course!

Anyway, now that my trenches seem to be completely devoid of Robins I almost feel like something is missing. haha!

I guess I kinda enjoyed the challenge of trying to outsmart them. Oh well, on the plus side, it is certainly nice not having to worry about my worm population being gobbled every time I leave the garden unattended!
8)