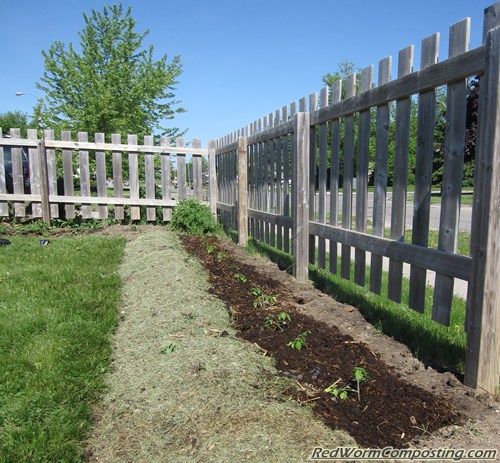 My main vermicomposting trench – expanded into a mini windrow

Last year I discovered the power of the ‘vermicomposting trench‘. As most of my loyal readers will know, it all started with somewhat naive attempt on my part to compost all of the usable food waste from a very popular local restaurant (see ‘Restaurant Food Waste Vermicomposting‘). In a desperate attempt to dispose of (in a neighbor-friendly manner) large quantities of rotting, stinking organic waste, I decided that burial was probably my best bet. The rest, of course, is history.
8)

I’ve never been a particularly skilled gardener (although I’m working to change that this year), but it didn’t seem to matter much last year since Red Worms and a bunch of ‘waste’ came together to create the ultimate all-natural fertilizer factory. By the end of the summer I was basically begging friends and family to take produce home with them when they came to visit. The results were astounding – far better than expected, and far better than previous years when regular off-the-shelf fertilizers were used.

It certainly was a LOT of work dealing with all that waste and creating my trench (and pit) systems, but there was never a doubt in my mind that I would be using this approach again this year. The big difference of course, is that I’m no longer receiving hundreds of pounds of food waste each week. Not only did this excite me from a labor-reduction standpoint, but this also meant that I’d be back in the same boat as most of the people reading these articles. I knew it would take a bit of extra effort to ensure that I ended up with enough ‘food’ to sustain the worms and plants, but at least the project is going to be a lot more relevant for the average backyard composter/gardener.

Despite the fact that my waste supply has been greatly reduced, I decided that I wanted to expand my systems – widening my main trench so as to basically convert it into a mini windrow, and digging new trenches in other locations. A major motivator was simply the fact that by increasing the vermicomposting area, I’d be greatly boosting my Red Worm population as well – never a bad thing when you are in the ‘worm biz’!
😉

My main foodstock of choice this year is aged livestock manure. I live in a rich farming region so there is plenty of this material available, and as I’ve written before, it is pretty well the ‘ultimate’ food for composting worms. Add to this the fact that it also has fantastic fertilizer value and it’s a no-brainer.
Apart from manure, I am still adding some food waste as well. We produce quite a bit ourselves, so I have been burying it in various locations along the length of my trench/windrow system as it accumulates.

Not too long ago I wrote about vermicomposting with grass clippings. Well, I’m happy to report that I have been adding a lot of mulched grass clippings to the windrows as well. Apart from the potential food value this will offer, the material serves as an excellent mulch (keeping moisture in) as well.

The ‘sandbox self-fertilizing garden‘ (links to article on Compost Guy website) is back in action with its own manure trench as well. As you may recall, I added a lot of manure and leaves to this bed to help prepare it for winter. After expanding my main (fence-line) trench, much of this material – along with loads of worms – was transferred over to help flatten out and clean up the sandbox bed for the growing season.
This year, instead of giant pumpkins and potatoes I will be growing corn and pole beans. I’ll write more about the sandbox system in future blog posts, but I will say this – so far so good!!
8)

There is plenty more to write about in general, but I would rather break everything up into a series of posts rather than creating a monster article now – this will help me to get this stuff to you in a more timely manner.

Below you will see a few photos showing how my main trench was expanded, then mounded up with manure/compost, along with my most recent shot of the fence-line trench. 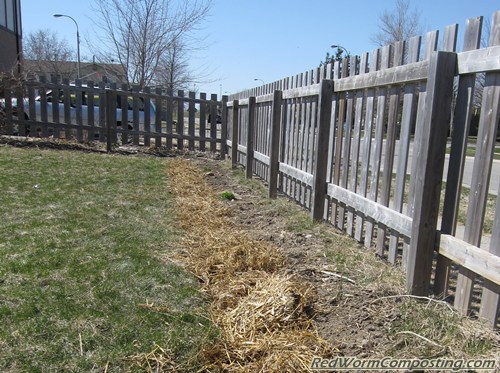 After adding some straw in the spring 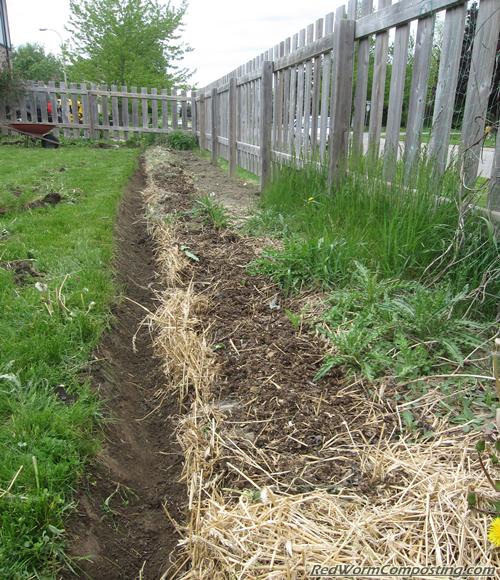 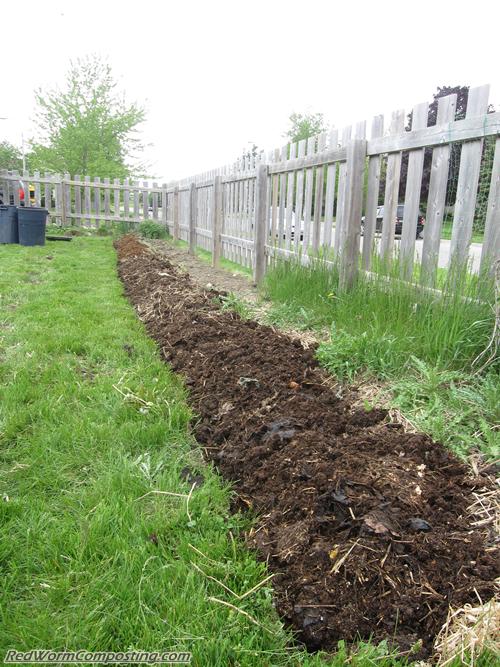 The trench after mounding manure and compost 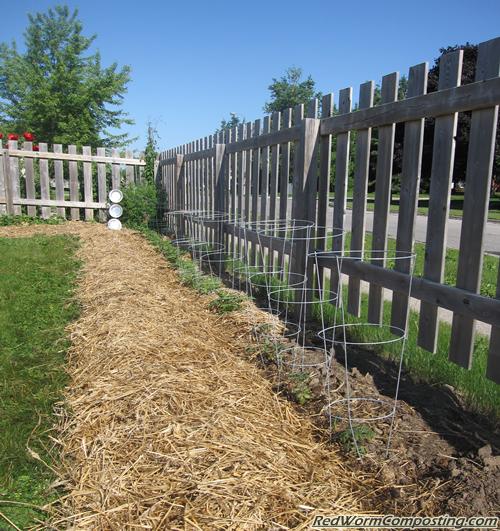