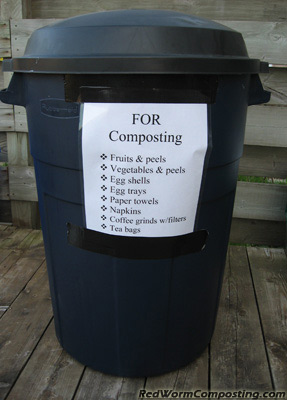 Back in May, shortly after starting my own composting business, I decided to see if I could track down a local source of ‘food’ for my worms. While we certainly do produce a fair amount of compostable food waste ourselves, I knew it wouldn’t be nearly enough to feed the worm herd I planned on growing.

I decided to approach the owner of a very popular restaurant in town, At the Crossroads Family Restaurant (usually referred to simply as ‘Crossroads’) to see if he might agree to part with some of his coffee grounds and egg carton cardboard. Little did I know I’d be opening a much bigger ‘can of worms’ (literally and figuratively)! As it turned out, the owner – Anton Heimpel – was very open to the idea, and seemed keen to provide me with plenty of other materials as well. So we sat down for a meeting hammer out all the preliminary details.

Fast forward two months (from my initial contact), and the project is still going strong. The funny irony is that I still have yet to see a single batch of coffee grounds (the material I originally inquired them about).
😆

I’m certainly not complaining. Crossroads provides me with literally hundreds of pounds of vegetable and fruit waste per week. Needless to say, my worms are extremely well-fed!

The project has been an eye-opening experience to say the least. It has been a major commitment in terms of both time and energy. I pick up buckets (like the one shown above) 6 days a week, unless other arrangements have been made, then chop up the material by hand before using it in various composting systems.

I’ll be honest, for the first couple of weeks I was wondering what on earth I had gotten myself into (and I still have my moments – haha). Aside from the fact that it felt like I was spending all my time handling the wastes, I also didn’t really have the necessary systems in place to utilize all the materials – at least not in a ‘neighbour-friendly’ manner! Speaking of which, given my close proximity to neighbours and the fact that my backyard is so visible, I’ve had to work extra hard to keep things looking and (even more importantly) smelling ok! It has meant that a lot more time needs to be dedicated to waste handling, BUT it has also been a great learning experience. I’ve discovered some cool composting techniques, and I’ve also learned what NOT to do with food waste!
😆

Here’s an example of the latter category…

Something I tested out early on was the use of temporary storage vessels for precomposting. These are basically big Rubbermaid tubs with many, many holes drilled in them. I chopped up the food waste, mixed in some soil (to kickstart microbial action), then dumped it in the bins, which were lined with cardboard. I figured that with all the air holes, and regular stirring, the materials would remain relatively odour-free as they started to decompose.

I’m sure this could work ok for some materials, especially if lots of shredded cardboard was mixed in as well, but I receive lots of brocolli and turnip waste – both of which have the tendency to get pretty skunky as they break down. It also certainly didn’t help that I ended up leaving one of this bins for quite a few days in my shed without ANY mixing of the materials at all! You know it’s pretty bad when you can actually smell a powerful rotting odour coming from a closed shed – and you can’t even imagine how bad it smelled when I opened the door.
😯

Even my trusty backyard composter couldn’t help me out with the never-ending waste stream. I tried adding materials to it early on, but it just ended up reeking! So much so, that all the contents ended up being dumped into another system I’ll be describing in a minute. 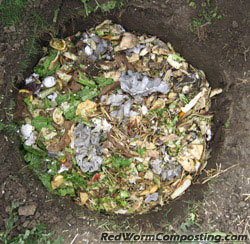 Thankfully, I finally started to hit upon methods that worked – and worked well! Most of them center around the idea of ‘pit composting’ – basically you dig a hole, you dump in the waste and you cover it up! Relatively easy – and completely odour-free. For the first few weeks I felt more like a squirrel than a ‘compost guy’, but the important thing is that I was able to handle all the materials – and was able to create some nice pockets of slow-release fertilizer while I was at it.

In an effort to make my pits more worm-friendly, I made sure to add lots of cardboard at the bottom and a layer or two in the heap itself. I also hit upon an even better system – the vermicomposting trench (something I’ll be writing a lot more about). In fact, it was via my first trench that many of my methods-gone-wrong were rectified. I put a thick layer of shredded paper and cardboard down along the bottom of the trench, then basically dumped in all the nasty stuff, before covering with some soil and peat moss.

I think the real turning point in all this came about once I was able to secure a steady supply of straw for myself. Having ample amounts of c-rich bedding material on hand has made all the difference. I’ve been able to add thick layers of straw over top of my trenches, and was even able to get two backyard composters up to full capacity without too much stink!

The combination of 1) warmer temperatures, 2) having more systems in place, and of course 3) a worm herd that’s continued to grow by leaps and bounds has helped to make this a much more enjoyable experience in recent weeks. Oh, and did I mention the monstrous, healthy plants I’ve been growing as a result?

No?? Ok, well that will have to wait for another post!
😉

Stay tuned – much more to come!