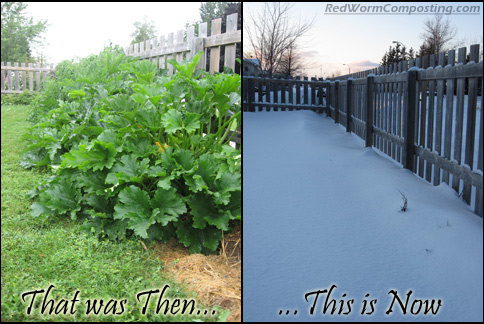 This post is so long overdue it’s almost silly. But hey – I’m a pretty silly guy!
😉
I figured that – if nothing else – this final vermicomposting trench wrap-up could at least help to inspire a few readers to add trench gardens to their plans for this year’s gardening season!

Based on the number of times I’ve referred to my previous trench posts, and all the positive things I’ve had to say about this approach, I’m sure you won’t be surprised to learn that I considered my vermicomposting trench projects an overwhelming success. In a sense I’m kicking myself a little for never having thought of doing this before. Obviously, the restaurant vermicomposting project was a major influence.

In fact, I’m not even sure ‘projects’ is the right term, given the fact that initially I was just looking for a way to deal with hundreds of pounds of food waste without offending my neighbors! But of course, they blossomed (literally – haha) from there and really gave me a taste (literally) of what’s possible.

Let’s review some of the advantages of this approach: 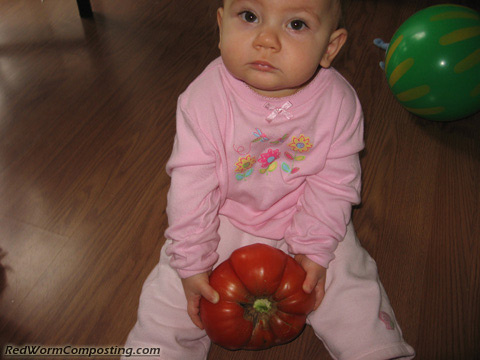 Now thatsa what I call a Baby tomato!

As I’ve stated before, my gardening skills in general are not top-notch – I tend to be lazy and just don’t dedicate the time either to planning or to the learning of proper techniques. As such, I was pretty impressed with how well everything grew – and it makes me wonder what real gardeners would be able to accomplish with this approach! 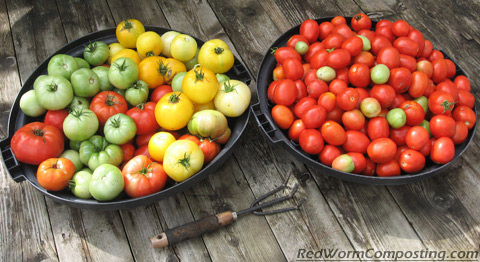 I grew so many tomatoes and zucchinis that I was literally giving away shopping bags full to any friends and family that would take them – and still, not all were used (yeah – worm food!!!). 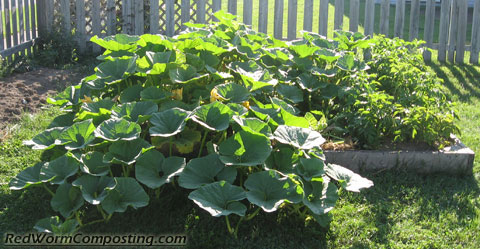 Although started very late, the pumpkin patch / potato garden did quite well

I’ve written more about my ‘sandbox self-fertilizing garden‘ over on the Compost Guy blog, but this was another example of a successful implementation of the composting trench approach. I didn’t even plant anything in this bed until mid-July, but still managed to produce a nice big pumpkin for Halloween (also some smaller ones, but they just ended up as worm food). The potato crop was fairly disappointing, but hopefully we’ll see an improvement in yield this year with a bit more of a proactive approach. 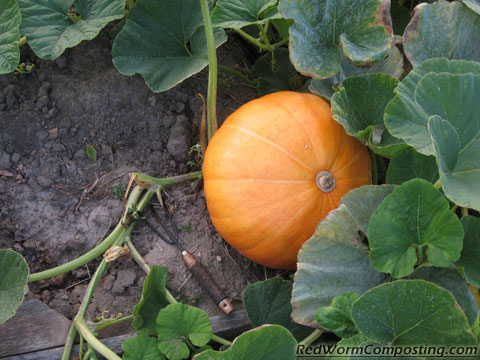 This poor, unsuspecting pumpkin will soon be a ghoulish jack-o-lantern!

I’m sure some people were left wondering if the trenches were going to be kept active and added to during the winter months. While I seriously considering making an effort to do so, I realized that it was probably better to put most of my focus on the big winter worm bed we set up over at my dad’s place.
As such, I actually moved a lot of material (containing a LOT of worms) from the fence-line trench over to the sandbox garden. Unfortunately, winter hit a little early this year and I wasn’t able to protect the sandbox bed as planned.

As you may recall from my last winter composting update, a very brief bit of really nice weather (which resulted in most of the snow disappearing) over the holidays did allow me to better prepare the sandbox for the very cold weather typical of Jan and Feb. At the same time, I added a bunch of manure to the fence-line trench to provide a nice food boost for the worms once spring arrives.

Since I am no longer involved in the restaurant vermicomposting project, my waste material of choice this year will likely be horse manure – it should be interesting to see how it compares to the food waste. I predict that it will be excellent for plant growth (since it already contains a lot of plant nutrients), but that it won’t have all the same advantages – such as providing water for the plants the way the food waste did.

Anyway – I definitely can’t wait to get things rolling! Apart from revamping my current trench systems, I have plans to make at least one or two more. One in particular should be really interesting. I live on a very open, exposed property – something that has really bothered me (and likely my neighbors – haha) ever since moving here. This year I’ve decided to create a natural (and seasonal) privacy fence along the back fence-line, using Jerusalem Artichoke. My neighbor sets up an above-ground pool every year in her backyard, so I don’t think she’ll mind having the extra privacy as well (although she is the furthest thing from being an ‘earthy’ gardening type, so she may think it’s an eyesore). Aside from hopefully providing a fast growing wall of foliage, the ‘artichokes’ will offer some food value as well since the tuberous roots are edible.

I would love to hear about other people’s outdoor vermicomposting projects this year, so please write in to tell me about them. I’ll likely feature some of these on the blog (for those who provide photos and are interested in this) as well.
😎

You Know You Are A True Worm-Head When…