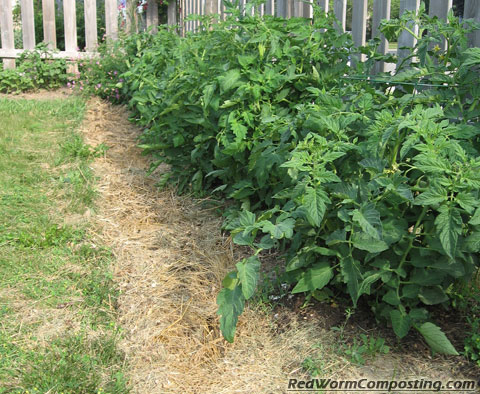 I’ve been looking forward to writing this post for quite some time now. As I mentioned in the post about my restaurant vermicomposting project, the trench idea started as somewhat desperate attempt to deal with the large quantities of food waste I’ve been receiving each week. Since that time, it has become much more than that – I like to think of it as a long-term, slow-release, natural fertilizer factory (or LTSRNFF for short – haha).

I situated my first trench directly in front of my tomato bed, thinking that it might help them grow somewhat better. Unlike last year, I decided not to add slow-release fertilizer sticks so that I could see the full potential of the natural method (or all of the negative repercussions if it didn’t work). One thing I was somewhat concerned about was the fact that I didn’t set up the trench well before the planting of the tomatoes – in fact, the trench ended up going in a week after the tomatoes were planted!

My concern revolved around the fact that I was adding lots of stinky, anaerobic waste (from other food waste composting attempts gone wrong) and materials that were not very well stabilized (decomposed) in general. It is known that various phytotoxic compounds can be produced via anaerobic processes, so I worried that I would end up stunting the growth. The ideal situation would involve setting up your trench months before you plant anything, so that by the time they go in, there is a rich supply of composted materials to start tapping for nutrients.

As I have discovered however, a trench can really go in at any time! I’ve seen no indication that the plants have been suffering as a result of their close proximity to the trench – and I think that right there is the key – the “close proxity”. You are not, after all, planting your crop directly in anaerobic sludge. You are basically giving them the option of spreading their roots in that direction. The interesting thing is that they do in fact seem to send roots into the material (composted or not) quite quickly.

One thing that likely helped my tomatoes right off the bat was the fact that I added a scoop of Worm Power worm castings into each hole. As I’ve discovered this year, worm castings are a fantastic material for helping any plant get started, whether it be a seedling or a transplant.

Time to move on to the actual creation of a vermicomposting trench. The set of photos I’ve included below actually feature the third trench I installed this year – basically a continuation of the tomato bed trench. I recently wrote about my lack of gardening skills over at CompostGuy.com, and this was a prime example. I planted this bed (which contains zucchinis and several different legumes) way later than I should have, and again dug the trench even later still. Yet again, the composting worms have come to my rescue – I added quite a bit of worm compost (harvested from my outdoor worm bin) into each hole, and more was added as a top dressing as well. 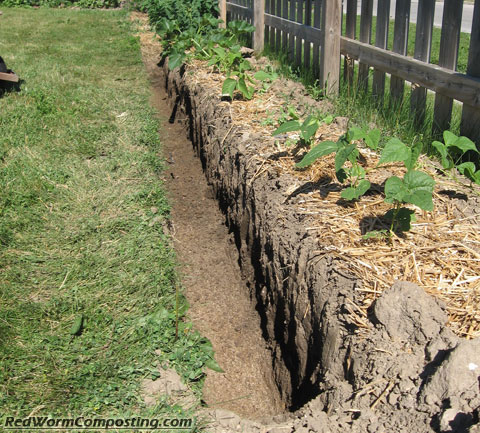 The first thing I (obviously) had to do was dig the actual trench – certainly the most labour-intensive and tedious part of the job. The depth and width of the trench is definitely up to you. I chose not to go down quite as far with this trench as I did with the one in front of the tomato bed. Keep in mind, the deeper you make it the more anaerobic it will be down below. This may or may not be an issue – just something to consider. Deeper (and wider) trenches have the advantage of being able to hold more material. 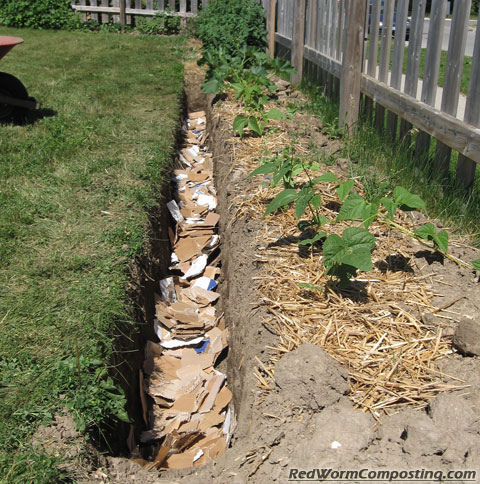 Next, I added a lot of coarsely shredded corrugated cardboard. This creates a bit of a ‘false bottom’, helping to absorb excess moisture from the rotting waste materials, as helping to balance the C:N ratio of the mix (I like to err on the side of higher C when vermicomposting). 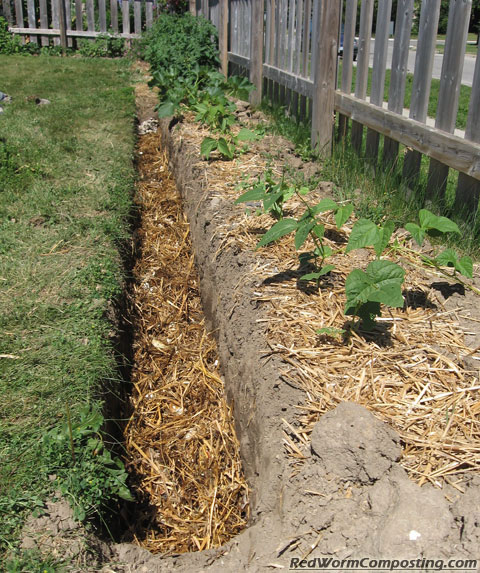 It may look like straw, but this is actually partially decomposed material from my backyard composters. As you may recall, I had zero luck when I initially tried using my backyard composter (only one was active at the time) to compost food waste, but once I had a lot of straw available I was able to start using the composters again – with much greater success, I might add.

This pre-composted material should create a good ‘habitat’ for the composting worms added later. You don’t really need to add this (I didn’t add any to my first trench) – I just happened to have it on-hand, and knew it would work well in the trench. This is important to keep in mind when building a composting trench – don’t focus so much on exact instructions as you do on the principles involved, and the materials you happen to have on-hand. If I installed 5 trenches, I can pretty well guarantee that they would all be different – BUT, they would all be constructed with the principles of vermicomposting in mind. 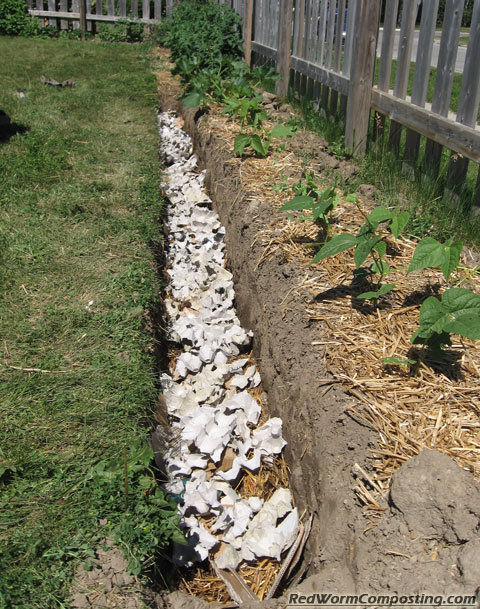 Here is another layer of shredded cardboard. This time it was shredded egg flats (from the restaurant) – in my opinion, the best kind of cardboard to use for vermicomposting. As you can probably tell, the vermicomposting trench is set up in a ‘lasagna composting’ manner, with alternating layers of ‘greens’ and ‘browns’ (again, with more emphasis on browns, since it is a worm system). 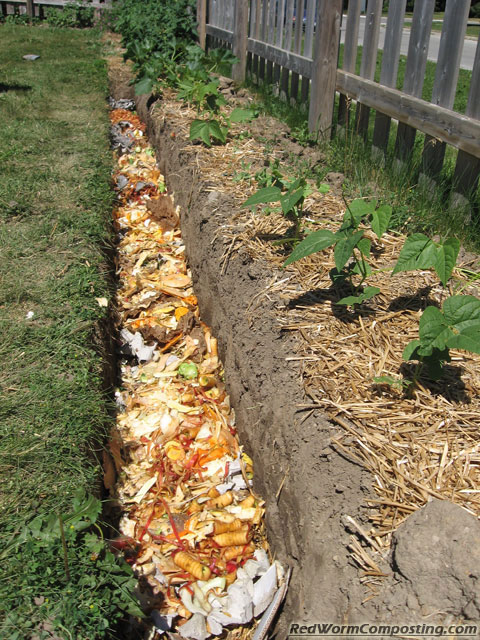 Next, I added a lot of chopped up food waste – apple peels and cores, carrot peels, turnip peels, lettuce, broccoli stalks, egg shells etc. It was added in fairly shallow layers, but given the length of the trench, it was actually quite a lot of material. 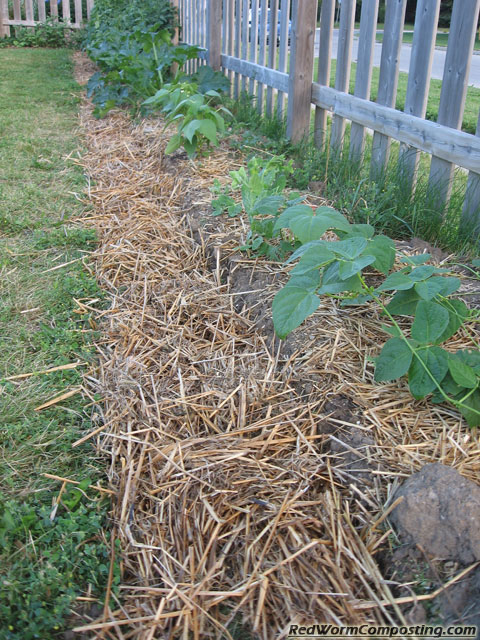 I’ve actually left out a couple more alternating layers (I’ll include everything in the video I’m going to make), but I think you get the general idea. One of the important steps not shown was the addition of composting worms. I basically just harvested a LOT of partially mature vermicompost (containing lots and lots of worms) from my outdoor worm bin and added it as a layer over some moistened coconut coir. I have continued to add more worms since then as well. If you want to get your system working for you very quickly, the best bet is to add a lot of worms at once – you may however want to get yourself a compost thermometer before doing so. Since these trenches can hold a lot of material, they can also heat up quite a bit – the last thing you want to kill your worms or cause them to leave the area.

The final step involved adding a nice thick layer of straw. This helps to keep moisture and bad odour in, and hot sunlight and worm predators (like Robins) out.

That’s pretty much it! So far, I’ve been blown away by how well these trenches are working for me. My tomato plants are literally bigger than any tomatoes I’ve ever grown before – and we’re only part way through the season! I think the limitless water-supply (released from rotting waste) and readily available nutrients, combined with the seemingly-magical growth stimulating properties of worm castings has created the ultimate environment for ‘growing stuff’. I’m not 100% sure I would see the same results with trees, shrubs and perrenials – but I’ll certainly be interested to find out!

Needless to say, I’ll be providing more updates as the growing season progresses. As mentioned, I will also be putting together a video all about making a vermicomposting trench.