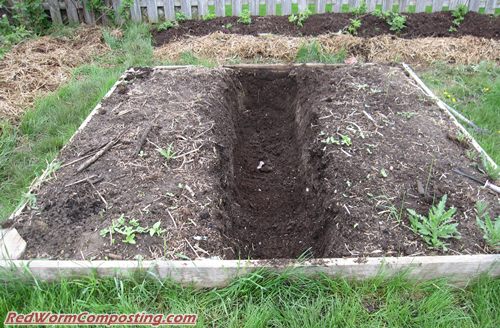 Generally, when I talk/write about vermicomposting trenches I highlight the “benefit” of not needing to harvest compost from these systems. I’ve always thought of them as in situ composting systems best used to fertilize plants growing in the immediate vicinity.

It’s fair to say that my perspective has shifted somewhat after digging a LOT of material out from my sandbox garden trench and putting it to good use as a compost mulch on a rather unsightly looking raspberry garden at the back of my yard. 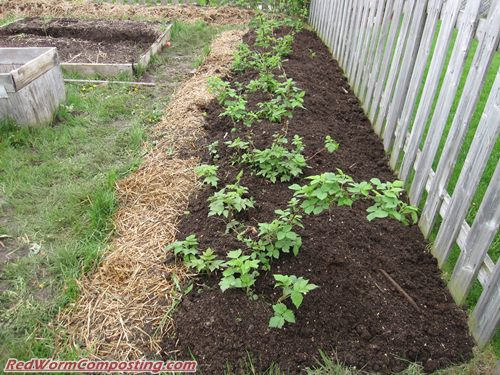 I almost felt like some sort of compost archaeologist as I got further and further down, scraping back the humus from several years of rich organic waste deposits. Down close to where I stopped my digging I found loads of egg shell fragments – literally the only real evidence of ever having added hundreds of pounds (if not more) of restaurant food waste to this particular system during the summer of 2008.

While I certainly wouldn’t refer to much of the material as “vermicompost” (other than the stuff up near the surface), it was nevertheless a beautiful, earthy peat-like mix that I was more than happy to heap onto the raspberry bed! I was so inspired by this unexpected bounty of garden-worthy material that I ended up excavating another bit of garden that’s been home to various worm beds – adding that material as a mulch to one of my other gardens.

I think this might end being a new spring activity for me! Aside from being able to put all this great material to good use, I am also being left with a nice empty space – ready to be built up as a brand new vermicomposting system once again. I’ll tell you what I did with the other bed in another post, but let’s now look at how I set up my sandbox trench again.

Normally I will start ALL my systems (trench or otherwise) with some sort of absorbent bedding material, but every so often I like to mix thing up a bit and live on the wild side! haha
I happened to have a lot of grass and sod I’d ripped up during my initial raspberry bed clean-up, so I tossed a bunch of that down in the bottom of the trench. 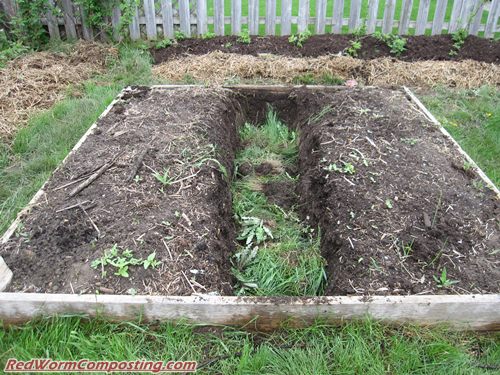 I decided not to get too carried away, though, and followed that up with a nice layer of ripped up drink tray cardboard. 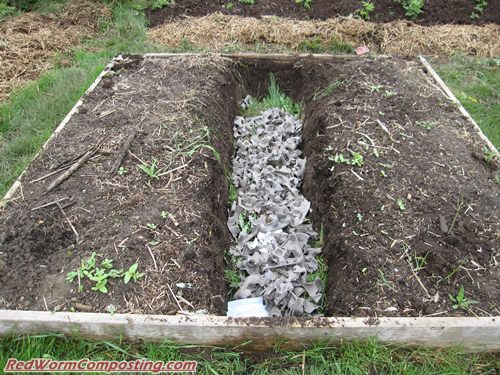 Some of the other materials added included lots of rotting leaves, hay and vermicompost – from what’s left of my “winter windrow” system (now basically integrated with the rest of my windrow network) – coffee grounds, and weeds. 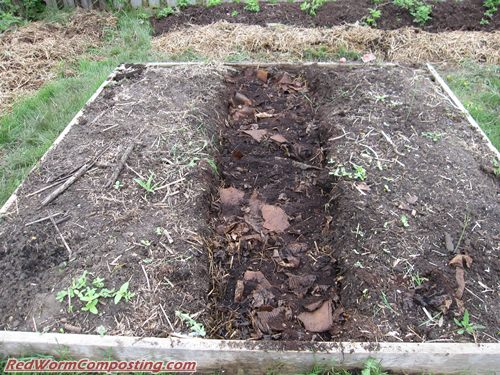 Lastly, I topped the bed off with a nice thick layer of aged horse manure (already containing some Red Worms) so I could still make use of it as a decent “worm bed”. 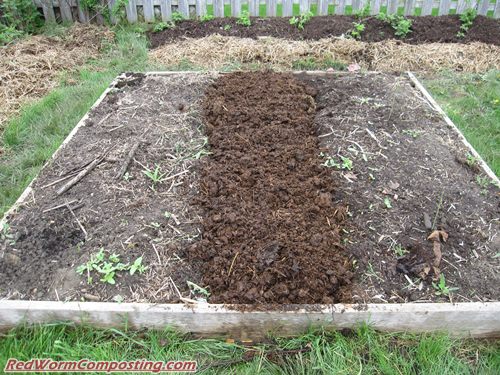 (OK, technically the “last” addition was a layer of straw – but I forgot to snap a picture! haha)

I’m not sure that I’ll be excavating any more of my trenches this year (I’m content to continue building up the windrows that now sit over top), but I do have some other compost excavation projects to tell you about soon!
8)