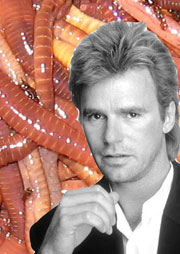 One of the cool things about the ‘blogosphere’ is that it provides me with a great opportunity to meet lots of interesting, like-minded people. I recently received an email from one such individual, who seems to share my interest in geeky, hands-on science projects, such as worm bins and hydroponics systems.

Unlike me however, this person (who refers to himself only as ‘Hydroponica’) is much more of a technically gifted problem solver, so he enjoys rigging up various contraptions and systems for himself – very often using items already present at his house.

One such rig, recently installed in his worm bin, is an LED night light – used as a means of discouraging the worms from crawling up the sides of the bin (and sometimes out on to the floor). To me it seems like a really nifty idea since it uses very little power, isn’t so bright as to stress out the worms, and won’t give much (if any) heat. As he points out, it does limit you in terms of worm bin location, since you’ll need an outlet nearby (or at least an extension cord), but that’ hardly an issue in most homes. I would imagine one could also find some sort of battery powered LED light to use instead if the bin wasn’t near an outlet.

Be sure to check out his blog post for all the details: Worm Bin Modification
He also chats about some other interesting techniques for keeping worms inside a bin, so it’s definitely worth a read. Oh, and he refers to me as “a genuinely cool guy”, so that never hurts either!
😉