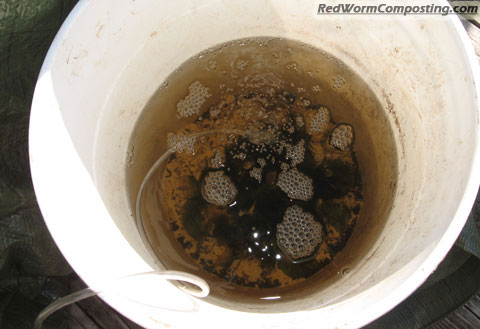 As I’ve written multiple times, composting worms don’t so much feed on the waste materials as they do one the microorganisms that have colonized (and are decomposing) the material. Based on this fact, I’ve thought of various ways to deliver microbes to the worms without necessarily feeding them rotting wastes.

When I was young I remember learning that if you add grass or straw to a jar of water then let it sit in the sun for a few days you’ll end up with a soup of assorted aquatic microbes – various algae, paramecia, amoebae – some of them even visible to the naked eye when held up in the light. I’ve often thought about using this same idea to create a microbe soup for my composting worms. If a bedding material like corrugated cardboard was allowed to soak in this ‘soup’ and then fed to the worms, I suspect they would love it.

As a fun little experiment I think I’m going to test out this idea by comparing the rate at which microbe-cardboard and plain-water-cardboard are colonized and consumed by the worms.

Making microbe soup is extremely easy. All you need is a bucket, some water (preferably rain water or aged tap water), some organic matter (eg. grass clippings), and a cheap aquarium air pump (with tubing). In a sense, it is kinda like making compost tea. Simply fill your bucket with water, add your waste material, then gently aerate it while leaving it to sit in a sunny location for few days.

As I suggested with the compost tea, you might even try adding a source of simple sugars, like molasses or honey, to help boost the microbe population even more.

I have actually been playing around with this a little bit this year. I put some rotting spinach in a bucket of water and aerated the mix for a few days. This water was then used to hydrate coir bedding, which I was using for a new worm bin. It is hard to say for sure if the worms liked the ‘new and improved’ mix, but my hunch is that it was likely at least a little more inviting than plain ol’ coir soaked with water.

I suspect that adding aeration isn’t nearly so important as it is when making vermicompost tea. In some ways I think a non-aerated bucket might be a little better since you won’t end up disrupting the colonies of organisms multiplying in the water column. The more vigorous the aeration, the more likely you just end up with slimy strings of biofilm stuck to the sides and bottom of the container – I’m sure this stuff would be like caviar for worms, but you won’t be able to soak your bedding with it the way you would with a uniform mix. Nevertheless, adding at least a little aeration is probably advisable so that you don’t end up with a stinky, anaerobic mess.

I’ve been adding some food waste to a water-filled garbage can (I’ve been using to store rain water), and have been fascinated with the community of organisms that have developed. The water has become quite cloudy – very likely a good indication that the microbial population has grown considerably. I’ve also noticed the appearance of many Chironomid (midge) larvae (aka ‘Bloodworms’) – almost certainly there to take advantage of the rich microbial buffet available to them. It is times like this that I definitely wish I had my outdoor aquaponics system up and running (something I had planned for this summer), or at least an aquarium with fish. Bloodworms are outstanding as a fish food.

Anyway, I’m going to start adding some of this water to my indoor worm tubs, and will start up a separate bucket to prepare for my little experiment.

Since writing this post, I discovered firsthand why it is important to keep your microbe mix aerated! If the liquid stinks, DO NOT add in to your worm bin (or do so in a very small area to see what happens). I added some stinky water to a couple of my worm tubs and ended up with some dead and dying worms. I really didn’t think that the concentration of harmful compounds (that can be produced via anaerobic digestion) would be high enough to create issues, but clearly I was wrong. Luckily, I didn’t lose too many worms, but I’m still kicking myself for being so careless with it.

On the positive side – everyone who reads this gets to learn from my mistakes! (as per usual)
😆

So – once again – DO make your own microbe water, but make sure to add aeration from the start. Definitely DON’T add it to your worm bin if it smells really bad.