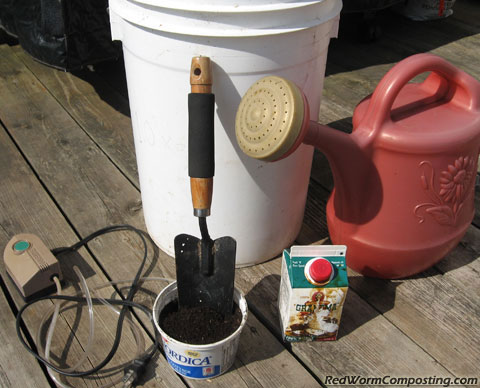 A topic that a lot of people getting into (or already involved in) vermicomposting seem to be interested in is that of ‘worm tea’ – also known as vermicompost tea, worm castings tea, or just plain compost tea. Many assume that worm tea is simply made by collecting the liquid that drains out the bottom of a worm bin (if it has drainage, that is), but this isn’t really the case.

In actuality that liquid is referred to as leachate, and definitely isn’t nearly as good as real worm compost tea. The problem with leachate is that it can contain all sorts of compounds produced in partially composted or anaerobic waste materials – some of these can actually be phytotoxic – that is to say they can harm or kill plants. If you dilute the leachate with aged water and aerate it for 24 hours or so, it should be fine. Also, when it really comes down to it, if you are simply pouring the stuff out in your garden (i.e. large area, lots of microbes) it’s probably not that big a deal. I’d be more concerned about using it directly on potted plants.

High quality vermicompost tea is made from…drumroll please…high quality vermicompost! Whether you make it yourself or purchase it, the material should look and smell like really rich black earth – the higher the percentage of actual worm castings (worm poop) in it, the more it should resemble coffee grounds. If you happen to be using a rubber tub type of worm bin, the material you harvest may be pretty wet, and not exactly what I would called ‘high quality’ stuff – at least not yet. I’d recommend simply airing it out once you have separated the worm from it. You can do this by spreading it out on a plastic sheet in a dry location – if outside, you might want to keep it in the shade just so you don’t completely bake all the life out of it.

The actual making of worm tea is very simple. I’m no tea guru myself, but I do know the basic principles, and in my humble opinion that’s all you need to make some great compost tea. 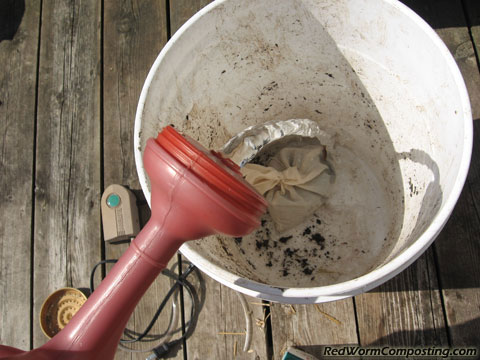 The amount of vermicompost used is up to you. For the batch I made today I used approx. 500 ml (I filled up a empty cottage cheese container). Academic research has indicated that worm compost is pretty potent stuff, with a little going a long way. So you really don’t need a massive amount to make a batch of tea – especially if you are adding some extra microbe food. Speaking of which, many of the serious worm tea brewers out there swear by a wide variety of additional amendments in their teas – materials like rock dust, kelp etc etc can apparently help to boost populations of the ‘good’ microbes, while adding some additional nutrients to the mix. 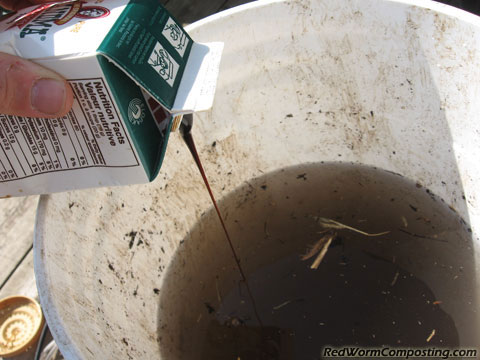 I added about a tablespoon of molasses for kicks and giggles – again, I am no expert here, but I do know this will help to boost microbial activity in the mix at least somewhat. 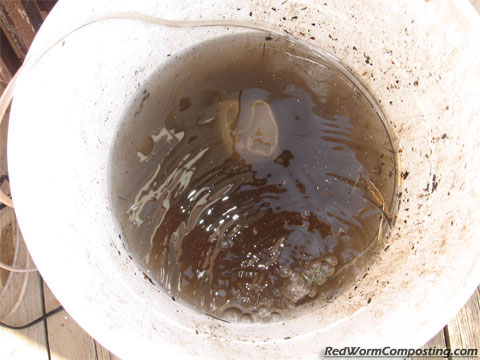 Lastly but certainly not leastly (thats a word – honest!), I plugged in my air pump to start aerating the tea. I will likely leave it going for 24 hours or so.

That’s pretty much it! Something I’ll likely do while the tea is brewing is move the tea bag around a bit just to make sure I’m getting a lot of the good stuff out. Normally (in an actual compost tea brewer) the bag would be suspended in the water column somehow to maximize flow of water through it, but I have little doubt that my mix will do just fine with the aeration and some addition shaking of the bag.

I’m not 100% sure what I’m going to use the tea for. I’m thinking about trying it on my big Hollyhock plant which has been suffering from various ailments and attacks from pests over the last few years. I gave it quite a bit a vermicompost this year, which definitely seems to be helping, but I think a foliar application of the worm tea might help it even more.

Anyway, I will keep everyone posted, and will certainly be talking a lot more about worm tea and vermicompost in coming weeks/months.