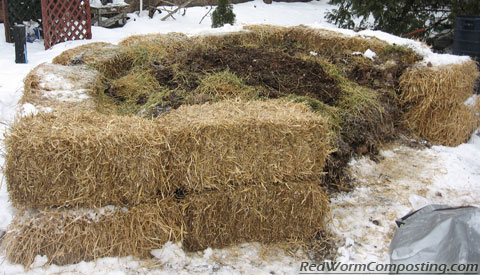 Unfortunately NOT an updated picture of the big winter worm bed!

As mentioned in my previous post, I am without my trusty digital camera this week, so unfortunately I can’t provide you with any new pics.
🙁

The last couple of days ended up being REALLY important for getting my winter vermicomposting systems in good shape for the cold months ahead.

Did he just says systemS?

That’s right folks – not only did I finish off the big bed at my dad’s place (will be adding more material early next week though), but I even decided to get one of the beds in my yard set up for winter warmth. It won’t be nearly as formidable as the larger bed, but is certainly a huge improvement over its previous state.

It all started with a few days of relatively warm weather (and lots of rain). Not only did the rain wash away much of the snow – thus exposing some of the beds in my yard – but it also started to thaw out the manure sitting in the bins waiting to be transported over to my dad’s place. Add to that the fact that the new lack of snow suddenly made my yard into serious eyesore (garbage bins + bales of straw + piles of manure – you do the math – lol), so that certainly didn’t hurt when it came to convincing my wife of the importance of my (holiday weekend) winter composting operation.
😉

Aside from coinciding with mild weather, the completion of the big bed also came at a time when the system was starting to warm up quite nicely on its own. My dad took some temperature readings late last week and the middle of the pile was 15 C (59 F) – a major improvement over the last readings I took. It was much cooler around the edges, but this doesn’t concern me at all – as long as I can create a nice warm (and expanding) core, I know there will be no trouble warming up the entire system over time. There is plenty more material to add, and also a lot that can be done to make the walls a little more snug (filling in gaps etc), so I think we are in really good shape now.

Despite partially thawing in the bins, the manure was a bit of a chore to work with. Thankfully it was very easy to get it out (since the outermost region was where thawing took place), but it took some effort to break it up and spread it out. We only ended up adding half of the bins to the pile, opting to put the rest in my dad’s basement for now. To add some more insulation value, we topped up the bed with straw from two bales. I’m pretty sure the warmer temps in the middle zone, combined with the added insulation will cause the rest of the manure in the heap to thaw out. Adding lots of warm material next week will certainly help as well.

In all honesty, I hadn’t planned to do anything more with it. Winter swept in before I’d had a chance to really protect it from the cold, so I figured I’d just let sleeping worms lie…until spring, that is. Seeing it fully exposed once again, and knowing I still had the better part of a cubic yard of manure (plus bales of straw) sitting in my driveway, I decided it might not be a bad idea to revisit my original plan.

I first added some of the manure to the long vermicomposting trench that runs the length of the fence (yet another bed with no real winter protection), but still managed to get a good mound piled up on the main bed – along with some fall leaves, a lot of food waste and the straw from one bale (added over top for insulation).

I ended up doing most of the work last night, during undoubtedly one the craziest wind storms we’ve seen this year. It is truly a miracle I was able to accomplish what I did. Try working with massive tarp (which needed to be folded multiple times), loose straw, and loose leaves in a serious wind storm and you’ll see what I mean.
😆

It was actually lot of fun though, and it felt really good to get that bed ready for winter. Interestingly enough, despite the fact that the top few inches of the bed were frozen solid (although easily broken up), down below I found lots of active worms – I can only imagine how active the bed will become now. Unfortunately, it won’t be nearly as accessible as the worm bed at my dad’s place, but I’m sure I’ll check up on it at least a few times over the next couple of months – and even more importantly, it should stay quite active, leaving me with a large, thriving population of wigglers by the time spring rolls around!