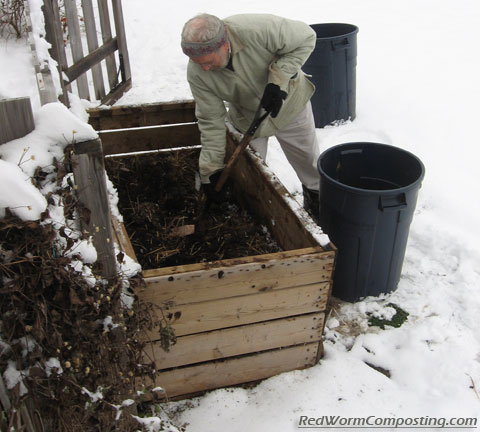 This week my dad helped me move worms from my big outdoor worm bin to their new winter home.

As anyone who has followed my blogging for some time will likely know, each winter for the last couple of years I have done a “Winter (Worm) Composting Extravaganza”. This is basically just a goofy name for my attempt to keep a large outdoor worm bin active all winter long. To read more about the fun I’ve had with this ongoing project, be sure to check out my ‘Winter Composting‘ page (at CompostGuy.com). Links to all my blog posts and a video I made can be found near the bottom of that page.

Both attempts at keeping my worm bin active through the dead of winter were fairly successful (last year’s system was significantly better than my first attempt, however), but I still opted to call it quits in February (burying the bin in a huge pile of snow), to make sure I didn’t end up killing my worm population.

Until fairly recently, my plan for this year was to once again set up the insulation wall on my bin and see if I could finally keep the system 100% active until spring. I subsequently decided to take an alternative approach with the 2008/09 Extravaganza, and instead set up a MUCH larger system in my father’s yard – where my goal will be to create and maintain a fully-functional (ie warm) worm bed that will stay active all winter long. I had already planned to build some sort of large-scale winter bed at my Dad’s anyway, and it just seemed to make sense to completely focus on that system, rather than trying to keep my backyard bin up and running as well.

The ‘worm bed’ we are using is actually the system I once referred to as my ‘Jumbo Garbage Garden‘ (also on the CompostGuy.com site). It was a bed that received a LOT of restaurant food waste, cardboard, and straw this past summer – along with a reasonable quantity of worms (mostly in the form of cocoons or juveniles in previously harvested material). As such, we certainly had a head-start in terms of making this into a good winter bed.

This fall we have also been dumping loads of aged manure (containing worms) into the pile as well. A while back I mentioned a pile of manure at a friend’s horse barn that has a good population of Red Worms. For a while there we were sure the pile was going to be taken and spread on the fields (as it usually is each fall), so we were really keen to transfer as much of the material over to my dad’s bed as possible. We later learned that the pile was going to be safe until Spring, so we’ve become much more relaxed about our transfer plan (since this horse barn is located quite some distance away). Nevertheless, we DID manage to add a fair amount of the aged manure, and a LOT more adult worms. 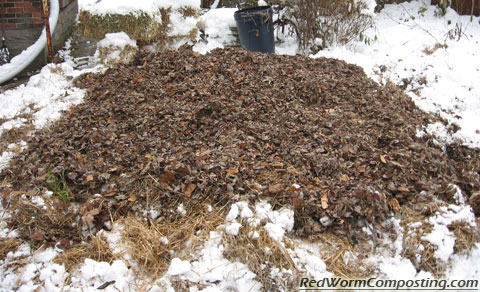 In recent weeks my dad added some fall leaves and more straw to create more thermal mass. Yesterday, we transferred most of the material from my outdoor worm bin (containing loads and loads of worms, I might add) to the new bed, along with even more leaves I raked from my property. Unfortunately, winter swept in out of nowhere quite recently, and we ended up with a thick layer of snow over the bed. Our plan has always been to add a huge tarp over top to keep the snow off the actual composting mass, and help to keep more of the heat in. My dad bought a fantastic (and huge) tarp recently, which has a somewhat reflective surface on the bottom and a black surface on the top.

Before adding the contents of my worm bin (and leaves) to the bed yesterday, we scraped off as much of the snow as we could. Once everything was laid down, we put the new tarp over top. 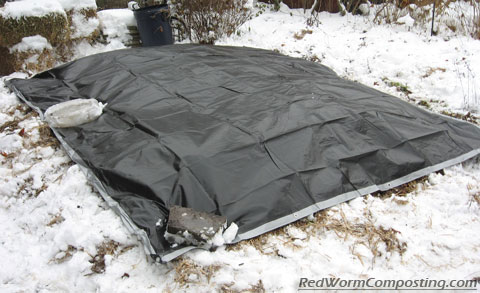 If you happen to be less than impressed with our efforts thus far – have no fear! The best is definitely yet to come! We will be building a wall around the bed using straw bales, and we’ll also be adding manure (fairly fresh) and more bedding. We also have a bale of alfalfa hay which we will be adding as a food source (and additional insulation material) at some point as well.

With the quantity of material we have in the bed, and the tarp laid down over top, we should be totally fine until we are able to get our wall built. Aside from the microbial warmth generated down below, the sun shining down on the tarp should really help to warm up the pile.

Anyway, as per usual, I’ll have PLENTY of ‘Extravaganza’ updates along the way, so do stay tuned!
8)

Worms – The Gift That Keeps on Giving!