Wormheads of the World Unite! 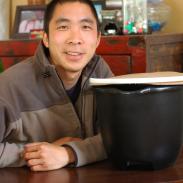 I recently received an interesting email from someone by the name of Steven Chow. In fact he sent me the same e-mail twice – once via Flickr and once via Youtube. He wanted to let me know about his new site, Vermicomposters.com, which I must say features a VERY cool concept.

Essentially it is an opportunity for vermicomposting fanatics (aka ‘wormheads’) to connect and share their pictures. What makes it even more cool is the fact that Steven has incorporated Google Maps into the site so you can see where everyone is from. He only has 17 people on the map so far, but I have little doubt that number is going to grow fairly quickly. I haven’t signed up myself yet, but am planning to do so.

Steven has also added a cool photo gallery of Flickr images relating to the topic of worm composting.

All in all, a very creative idea – especially given the fact that it relates to my favourite topic in the world. I can’t wait to see how this site develops!
8)

Help For an Overfed Worm Bin