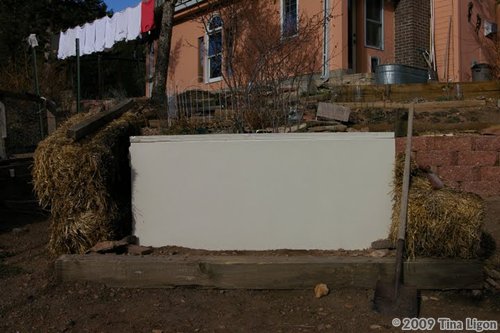 Our old refrigerator, we had the freon removed and stripped it of all parts

Background – This outdoor worm bin is located at ~7800’ in the foothills west of the Denver/Boulder area of Colorado (40 degrees latitude).

This experiment began in August 2009. We took our old refrigerator to a recycler and had the Freon removed and then stripped of all the mechanical parts so that we were left with a great insulated box. I did have to construct a new lid because the original doors got lost at the recyclers. I drilled several holes in the bottom for drainage. I also had to build a flat spot for the bin as is the case with all yard projects when you live on a slope. The original bedding consisted of old compost, straw, sawdust, shredded cardboard and some kitchen/garden scraps for a depth of about 4 inches. When leaves became available, I added a 4-5 inch layer as a food source and insulation. 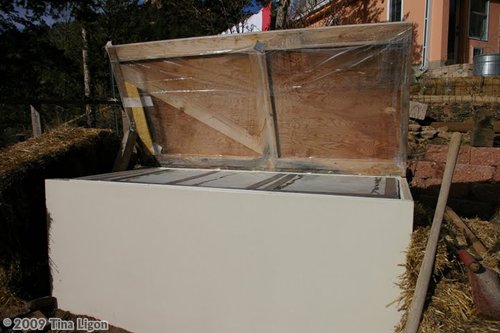 Once I had the bedding in place for about a week, I went to volunteer for our local worm man, John Anderson (http://www.cowormman.com) for a morning in exchange for a wealth of information as well as a five gallon bucket of worms and bedding. I can’t tell you exactly how many worms were in there, I didn’t count them. After I checked the bedding to make sure the temperature was staying pretty constant I dumped in the worms and let them settle into their new home. There is a carpet cover on top of the bedding to help maintain moisture and darkness.

After the initial break-in phase my goal was to increase the volume of the bedding before the weather cooled off for more thermal mass. So I dug into one end and added more bedding (similar to the original mix). So the total height was about 6-8”. Note on bedding: I keep an ongoing pile of cardboard egg cartons, shredded newspaper, other torn cardboard and a trashcan of leaves to add when I feed. 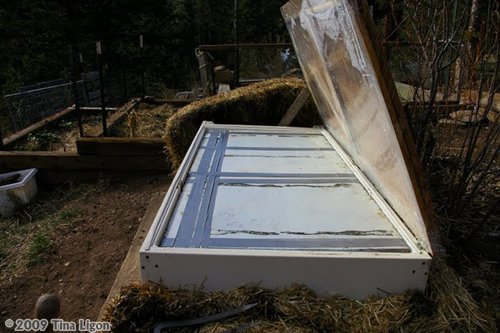 This is 2 inch insulation cut to fit the box

I also took some 2 inch rigid foam that I had and made an insert for the top of the bin. There are some gaps so it is not airtight. This piece of foam seems critical to keeping the inside of this bin warmer and moister. I have added some old straw bales on the non-south sides of the bin for added protection, especially on the west end to block our prevailing westerly winds. 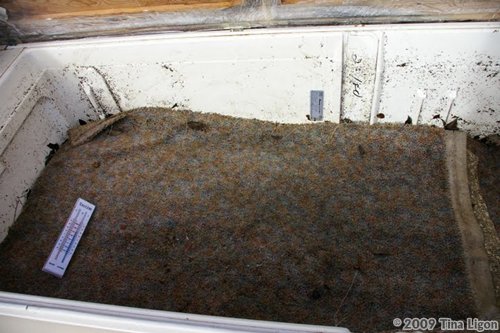 The temp has cooled off to about 65-70. My goal is to keep it in this range. On sunny days that I am around and can monitor, I open the lid and put a translucent cover on the bin to get some solar gain to heat the bin. You do have to watch this as it is amazing how warm it can get in there. But I am hoping this will help me with heating during the winter as we do usually get some sunny spurts of weather here for most of the winter. We have already had a few significant snowfalls (a couple of 1 footers and 1 – 3 footer) and cold spells (extended cloudy weather and temps in the teens) and so far so good. I realize this is the beginning of the winter season and have the colder weather to go yet. 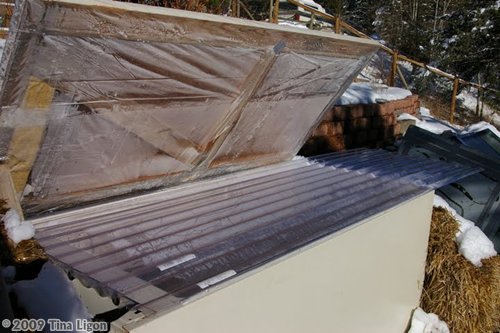 Trying to warm these wigglers up a bit, solar power! 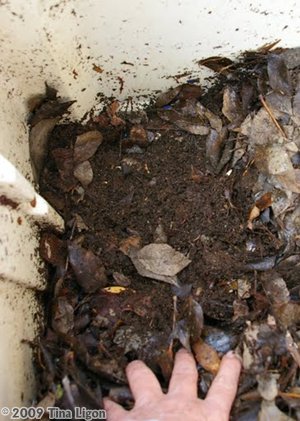 I have harvested about 4 pounds of worms out of the bin to start 2 indoor bins (the Rubbermaid type). One I gave to my neighbor and the other is my insurance of a worm supply in case of an outside disaster.

I have worms of all ages and stages going in the outdoor bin. There are lots of cocoons and babies so all seems good. The plan is to harvest the castings in March (assuming a stretch of decent weather) and put the worms back in with new bedding. If all goes well there should be extra worms by then to try some other projects. I have also started a log for temperature data and notes.

Silly lesson learned number 1 – Worms need air – As the weather started to cool I thought I should try to tighten up the bin’s air leakage some. I added a seal around the edge of the top with a few small gaps. The next morning I went out and the worms were staging a mass exodus up the walls seeking air, oops. I removed the seal from the two short ends so more air can circulate and all seems well.

Silly lesson learned number 2 – Composting creates heat – I added some food scraps (which I keep in a five gallon bucket to start decomposing before adding) and covered with about 4 inches of leaves. There was enough composting action going on to heat up the area to about 90 and some worms were again staging a revolt and trying to leave. So I had to pull the leaves back to let it cool off a bit. I now make sure I add food to only half the bin at a time and monitor the temp for a few days. I am trying to use this to my advantage now to create wanted heat. 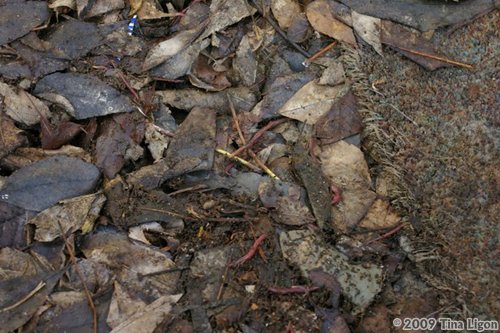 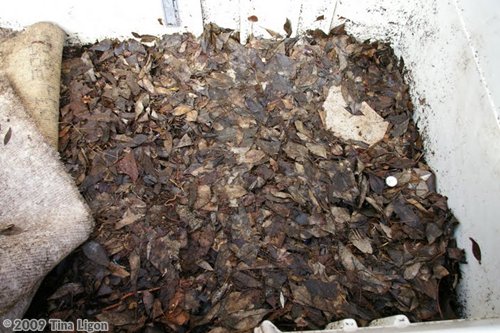 A 3-4 in. layer of leaves for more insulation and bedding/food, east end 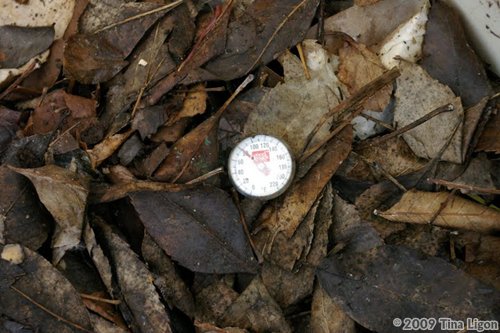 Kitchen meat thermometer, I fed this end over a week ago, it is about 4 degrees higher than west end 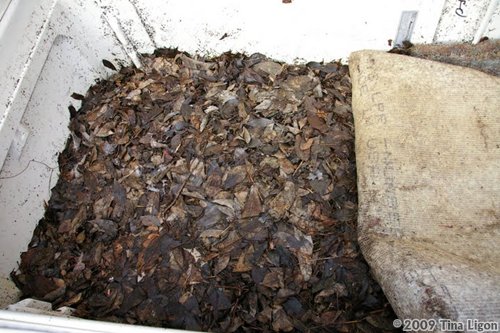 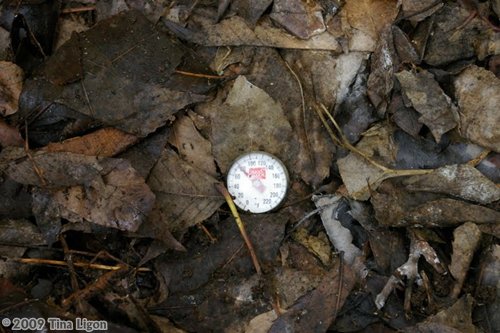 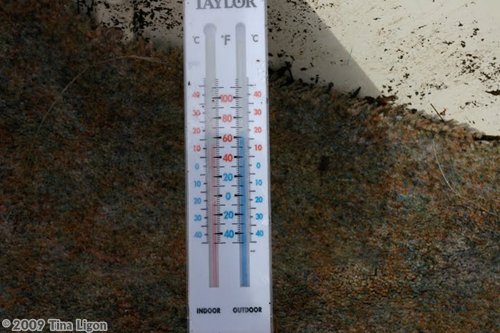 Simple thermometer with outdoor probe near bottom of the bin, reads 66, air temp 54 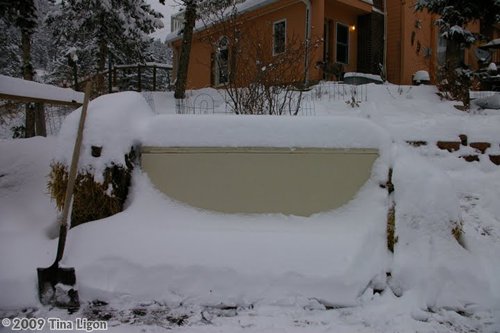 Bentley here – I just want to take the opportunity to send a BIG thank you to Tina for putting together this article and letting me post her great photos. Being the winter worm composting nut that I am, I was definitely keen to learn more when she first told me about the refrigerator worm bin, and am so pleased to include this among our great guest posts here on the blog. Speaking of which, if YOU have something vermicomposting-related that you would like to share, don’t hesitate to drop me a line!

Controlling Mites in a Worm Bin