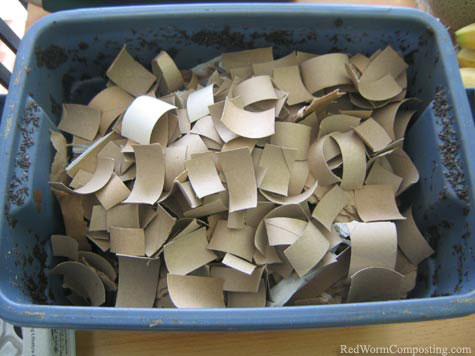 In my last post I discussed dumping out my ‘Coffee Cup Challenge” bin due to excess moisture levels in the bottom of the bin. That same day I started preparing the empty bin for my next round of worm composting 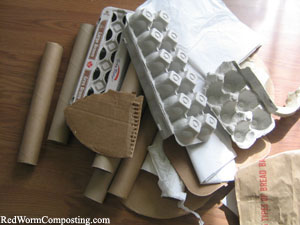 As always, I started the process by focusing on bedding. I had plenty of options here since I tend to stockpile lots of cardboard and paper for this very purpose.

My favourite type of cardboard for worm bins is the kind used for egg cartons and drink holders (from fast food restaurants and coffee shops), but I also like to mix things up a little and add a variety of different cardboard/paper types. In this case, aside from egg carton cardboard, I also added corrugated and toilet paper (and paper towel) roll cardboard, along with a couple different types of paper (I tend to stay away from bleached paper as a bedding material, by the way).

Next, I added some food waste. In this case it was some cantaloupe rinds (a wormy favourite) along with the contents of my kitchen scrap holder – aged coffee grounds, vegetable and fruit scraps and cardboard.

For good measure I decided to spray down the upper layer of cardboard with water. I often won’t bother to do this, but since most of the cardboard in the bin was very dry and I didn’t add a lot of water-rich scraps, I thought it might not be a bad idea.

I then simply closed up the bin and left it to sit for a full week. As I’ve mentioned elsewhere, this allows for the development of large microbial population (food source for worms) and also helps to balance moisture levels throughout the bin.
The amount of time you leave the bin to sit is totally up to you, but it should be for at least a few days (without worms) 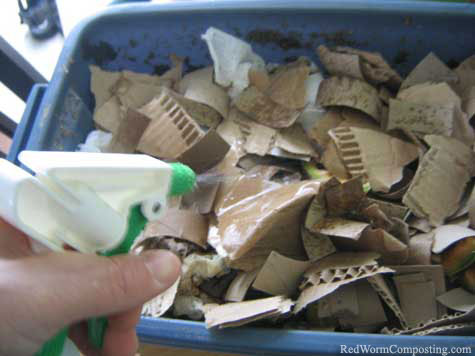 Truth be told, the only reason I ended up deciding to add new worms when I did was because I needed to harvest some vermicompost from my other small bin for a plant growth experiment I’ve started (Terracycle Challenge – more details soon).

Initially I tried using the standard “light harvesting method”, which involved dumping the worm compost (with worms in it) onto a garbage bag out in the sun, then slowly removing worm compost from the top. As layers are removed, worms continue to burrow down away from the sunlight and hot/dry conditions. This method has never worked all that well for me because I tend to keep my bin contents very moist.

After leaving the pile in the sun for the better part of two days, I decided to take a different approach. I poked a bunch of small holes in the garbage bag plastic and laid this in over top of the aged contents of my new bin. I then simply poured in the compost & worms and left it to sit for a few days. 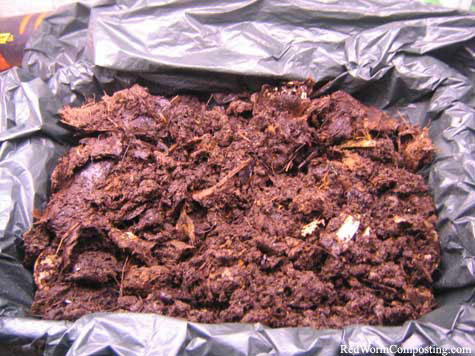 I was amazed by how well it worked! Even a few hours later when I lifted up the plastic to look into the bin I could see many worms already in the new bin or in the process of making the transition. Within a couple days I could only find one or two small worms left in the original material. There were however quite a few worm eggs, but unfortunately there isn’t much I can do about that.

Aside from providing a great way to separate your worms from compost, this method also gives you the opportunity to get rid of some of the fertile seeds in the mix. I noticed lots of little sprouts popping up – these can easily then be removed by hand.

My new bin seems to be doing very well. I’ve added some more dry cardboard and some watermelon and sweet potato. It’s going to be interesting to see how quickly I can build up the population in this bin!

Speaking of which, I’ve thought of a fun new experiment to try (I’m in experiment mode these days it seems)!
I’m going to set up a bin, let it age for a week or so, then add only 2 adult worms. I want to see firsthand how quickly I can build up the population. It’s going to be a royal pain when I have to count them, but that’s ok – the findings should be very interesting!