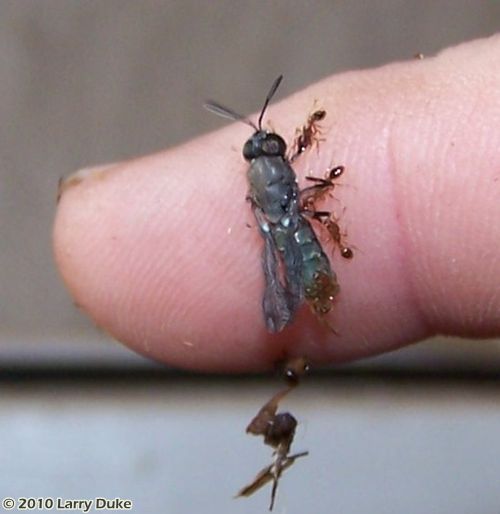 Our good friend Larry Duke sent me an email the other day with an intriguing photo (above) attached. Me being me, I promptly asked Larry if he’d mind me sharing it, along with his brief explanation. Larry being Larry (haha), he happily obliged. Here’s what he had to say (about the photo):

Hey Bentley. Just wanted to post a picture of a newly hatched BSF – under attack by ants – I rescued! Ants serve a purpose. Just wish it wasn’t in my worm bins! When I picked it up, the ants would not let go until they got smashed. The Soldier fly survived. I’m not sure if he was stung by the ants. They may not be harmed by the sting. You got me on that one!

I can’t help but wonder if these fire ants attack the worms as well? (Larry – have you seen any evidence of this?)
I myself haven’t found any evidence of ants actually attacking worms in any of my beds, and there are literally ant nests in the middle of a couple of my beds (and still plenty of worms in the general vicinity) – but our ants likely aren’t nearly as aggressive as fire ants.

Anyway, thanks yet again to Larry for sharing!
8)