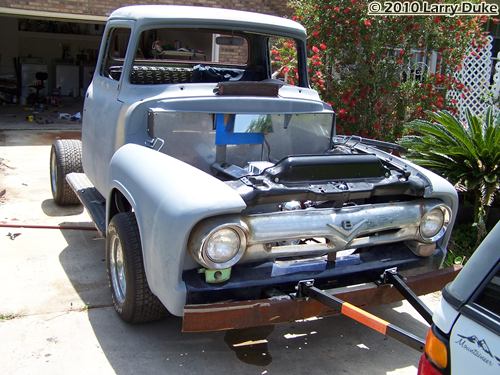 I recently received an email from our good buddy, Larry “The Garbage Guru” Duke (a veritable vermi-celebrity over on the Vermicomposters forum! haha) telling me about his latest project. I asked if I could share his email with our readers and he happily obliged

Hey Bentley,
Just wanted to post an unusual project that I’m working on. I try to think of unusual ways to reach people, including children in any way I can.
And one unique thing that I am working on, but have a ways to go, is a project called “Redworm One”! This involves a 56 Ford F100 – one of the most sought-after trucks for car collectors. Originally it was being built with a different theme, but when i got into redworms to try and help my wife,s beautiful flowers be even better, I stumbled across this website through a character named “Mark from Kansas”!
I was looking through composting literature and next thing you know, I saw a larger than life worm bin unlike any thing I had ever seen. And next thing you know, I told my wife i was going to build one of those bins! And when I get motivated, it’s game on!

I watched all of Mark’s videos several times and then just went to work. I built it without plans or measurements of any count. And it just happened to go together perfectly. Now I don’t recommend just anyone trying this because it could get expensive messing up. It’s better to have a plan. But these are stories for another day.

Anyway, I’m building this truck to go to car shows and hopefully schools, and other events that might interest people in vermiculture. The way I’m building this truck is with a worm hood ornament that I need to have made out of some kind of junk. Most of the money that I was building it with came from money from discarded waste, like aluminum cans. And also the metal came from junk vans that I cut the metal out of and used.

The hood will tilt forward and you can play composting videos and watch them from the drivers seat – via a flat screen under the hood – at the car show or other event. On the back you can put links to websites and maybe an estimate of how many worms I have at the time – such as “50,000 worm power…ask me how”! I also could give out plans to build bins and such. When the hood is tilted it will read “I got worms” like a billboard.
Anyway, that’s just a general idea and I have plenty of other stories to tell if anybody is interested. I have other things I have plans to build for vermiculture.

I CAN’T WAIT to see Redworm One when it is finished! Larry tells me it is further along than in the picture, but still a long way to go.

Thanks again Larry, for sharing!
8)