While I’ve been pretty quiet about it, I’m happy to report that things have continued to move along with my “Worm Inn vs Plastic Bin” challenge. Last Tuesday (April 16th) I added some food scraps – specifically, watermelon and banana waste – to the two systems. Since the waste materials were pretty chunky (I’m sticking with John’s original suggestion to avoid optimizing them too much) it was tough to weigh out exactly-equal portions. As such, I decided to add somewhat smaller amounts to the plastic bin. Here are the weights added:

It should be noted that these materials were frozen then thawed. I am including this optimization strategy for the sake of not dragging this experiment out too long. One material I’ll likely be adding regularly is carrot peelings – and these can literally start sprouting if the tissue isn’t killed (via freezing or cooking) before adding to the worm bin.

On Friday (Apr 19th) I started the Red Worm stocking process as well. I happened upon a nice concentration of large “breeder” Red Worms in one of my outdoor beds earlier in the week. Interestingly enough, it wasn’t actually one of my worm beds – it was a raised bed garden I had added some organic matter (coffee grounds etc) to in the fall! I ended up with enough of these worms to allow me to add 75 of them to each of the two systems. 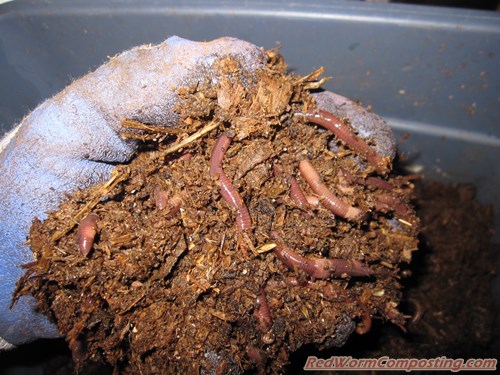 Obviously there are plenty more worms to add (I’m aiming for a total of 500 in each system), but I’m glad to at least have the ball rolling in that department. I’m sure the breeders will do what they do best, and lay plenty of cocoons in the meantime.