It has been almost a month since my last vermicomposting planter update, so I figured it was probably time to let you know how things are coming along with my “super simple” system.

Not too surprisingly, it has been a “slowly-but-surely” process so far, both in terms of getting the system set up and as far as plant growth goes. If at all possible, I recommend getting the planter set up early in the season, well in advance of actually planting anything. This way there will be a lot more “good stuff” already available to the plants. The cooler temps early on should also help to boost worm activity higher up in the system as well.

That being said, I am actually very happy with the progress that’s been made. 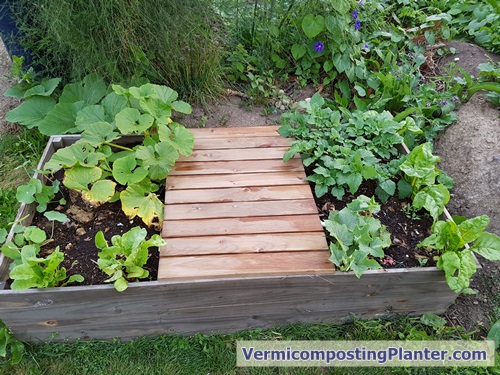 The plants have in fact grown quite a lot, and my pumpkin has extended a decent distance from the box. NOTE: regarding the leaves that don’t look all that great in the image above – those were the very first leaves that suffered a little through the initial adjustment period. All the new leaves springing out now look great. 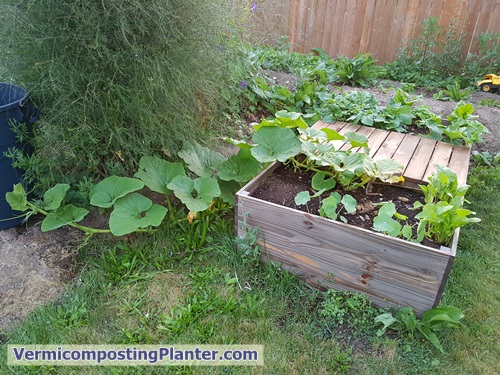 In case you have not been following the Facebook posts, the other plants in the boxes are various chards, lemon cucumber, ground cherry, and nasturtiums.

Well before getting the planter set up, I decided to plant another pumpkin (same type, “Big Max”) in a “normal” part of the garden. I’m sure the soil is quite fertile, but it is not associated with any form of vermicomposting bed.

In a sense this is like my “control” plant (given a solid head-start just for kicks and giggles). I am really curious to see how the two compare by the end of the season.

So far, this plant is a fair bit bigger than the one growing out from the planter, but the big test is to see how the pumpkin sizes compare! My aim is to (hopefully) have some nice big ones ready to go by Halloween (luckily I also have some other pumpkin plants a fair bit further along, just in case – lol) 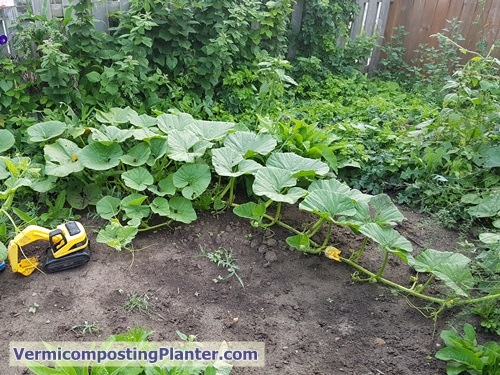 The composting zone has been working really well. I have added a LOT of material so far, and the level just keeps dropping down. Naturally, the upper zone is quite hot, but I have actually been surprised by how high up I am finding worms, especially around the edges. Plenty of other organisms in there helping out as well (eg beetles, isopods, springtails, and various fly larvae).

As air temps continue to cool (starting to get some hints of fall in the air already), I suspect I will be seeing a lot more worm activity near the top – and I can only imagine how big the worm population in there will be by the end of the season.

Anyway – that’s enough of an update for now.

Just so you know…

I have been sharing updates more frequently on Facebook (if you are active on FB but not yet a “friend”, let’s connect!), and we even have a Vermicomposting Planter Facebook group! Definitely a good place to be if you are wondering how things are coming along with Brian’s system as well.

And of course, if you have not yet signed up for the Vermicomposting Planter Project, I highly recommend doing so (it’s totally free).

The Tale of a Ridiculously Badly Neglected Worm Bin