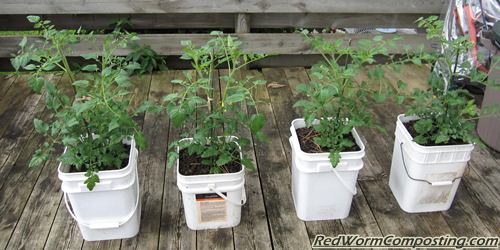 I have a sneaking suspicion you guys are going to be pretty sick of hearing about tomato growing fairly soon, so I better quickly write about a couple more vermi-tomato topics before we reach the saturation point here!
😆

At the end of my recent “Vermi Tomato Buckets” post I mentioned the bucket “experiment” I had started up, and refused to say any more about it. I have little doubt that most, if not ALL of you haven’t been able to sleep since as a result of that cliff-hanger (yuk yuk).

Goofiness aside, I do want to tell you about this fun (and definitely not scientifically rigorous) experiment I set up. The concept (as per usual) is pretty simple – I want to see if the presence of a population of Red Worms affects the growth (ideally, in a positive manner) of bucket-grown tomato plants. 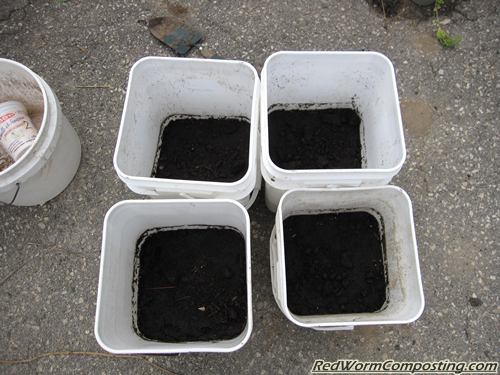 I started by adding a small amount of “black earth” potting soil at the bottom of four small buckets. I then drenched the soil and allowed it drain a couple of times. I just wanted to make sure the soil was “worm friendly” for the Red Wigglers in the worm treatments (potting soils often come with fertilizer salts in them).

Next, I planted “tomatoberry” plants in two of the buckets, filling the remaining space with more of the black earth. 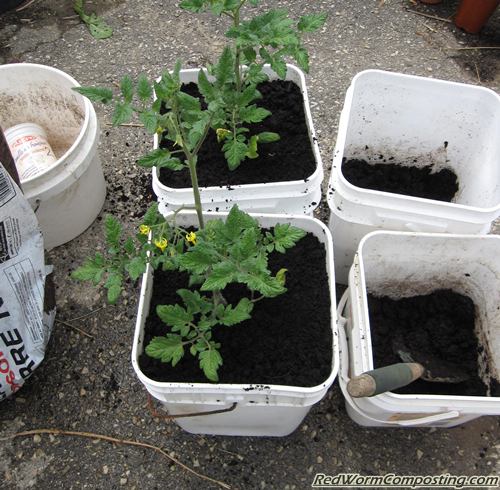 The other two buckets were set up in a very similar manner to those I wrote about in my Vermi Tomato Buckets post – that is to say that they were basically just filled the rest of the way with a coarse worm compost mix that was removed from the bottom of my big wooden backyard worm bin.

Lastly, I added a small quantity of alpaca poopy pebbles (just some scientific lingo for you – haha) at the top of each bucket. These should act as a slow-release fertilizer, and of course a “food” material for the worms. I may add other “food” materials as well (to ALL buckets of course), but we shall see.

One concern is that worms will somehow find their way into the non-worm treatments. I’m sure some of you might recall what happened with my “Manure Chard Challenge” last year! As such I’ve been keeping the two non-worm buckets up on the railing of my deck so as to (hopefully) avoid any vermi-contamination. In doing so, I have basically given these plants a bit of an edge over the other pair since this location gets a bit more sun each day. I have also hampered the worm side a bit by using a slightly smaller bucket for one of the plants. Don’t worry – if the manure-only side triumphs, I promise not to use either of those as excuses! haha

Anyway, it should be interesting to see what happens! Nothing too dramatic to report thus far. The plants in the worm treatment do seem somewhat more vigorous and robust but I certainly won’t be jumping to conclusions any time soon.