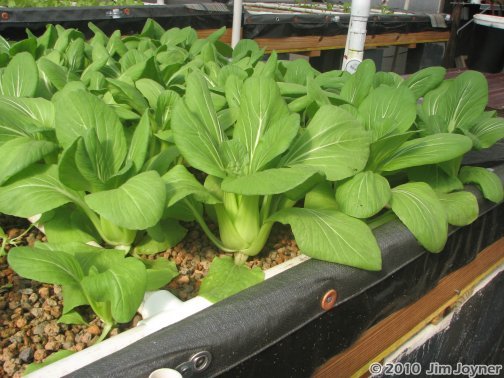 Unlike most hydroponic grow beds, there are thousands of Red Worms in this one!

I can’t remember exactly when I first stumbled across the “aquaponics” concept, but I DO know that it was quite a few years ago and that I was completely floored by the fact that fish waste could be used to successfully fertilize plants (for those of you not familiar with the term, “aquaponics” is simply a morphing of hydroponics and aquaculture). I thought hydroponics was a really cool idea to begin with, but based on my fascination with ecosystems and “nature” in general, it only made sense that I would quickly gravitate towards this approach…at least mentally, anyway.

You see, unlike vermicomposting – something I’ve been fascinated with for probably about the same amount of time – I still have yet (as of this writing) to actually set up any sort of aquaponics test system! I certainly have lived vicariously through the aquaponics activities of others, however!

I’ve been a member of the S&S Aquaponics email listerv for many years, and HIGHLY recommend this incredible information resource for anyone who has an interest in this sort of thing (be warned though – the volume of emails can at times be pretty heavy).

[UPDATE: I’m not sure this e-mail group is active anymore but there does seem to be an archive page active >>HERE<<]

Over the years, as I’ve become more and more involved (and obsessed – haha) with vermicomposting, I’ve naturally started dreaming up various ways to incorporate worm composting into the aquaponics process. Probably the most logical idea (in my head, anyway) has been to simply add Red Worms to an aquaponics grow bed, since I know how well they can thrive in very wet conditions – assuming they are provided with at least some oxygen. To me it seemed like the ultimate habitat, since apart from the high moisture, I knew the worms would also greatly appreciate the rich microbial buffet laid out before them. Add to this the fact that worm bi-products have been shown time and time again (via academic studies) to help stimulate plant growth via various mechanisms, and it seems like a no-brainer to stock a grow bed with them.

What’s a little strange, though – in a “hindsight-20-20” kinda way – is the fact that I’ve never even considered the notion of setting up a bioponics system (“bioponics” just referring to a natural hydroponic system in general) without ANY fish involved at all!

Well, thankfully that idea DID cross the mind of Jim Joyner – a LONG-time member of (not to mention prolific contributor to) the S&S Aqua list mentioned above! Unlike yours truly – as far as aquaponics is concerned – Jim not only talks the talk , but he also walks the walk, having set up multiple thriving plant growth systems over the years. Needless to say, when I first caught wind of Jim’s “aqua-vermiculture” systems a couple of months ago, I certainly sat up and took notice – but it was only recently (after the topic came up again on the email list) that I finally decided to contact him to learn more about what he’s been doing.

As I discovered, Jim is not only incredibly knowledgeable and experienced, but he’s also a very nice guy, and he seemed more than happy to let me share his photos and some of his information (adapted from posts originally submitted to the S&S list) here, and just generally help me out in any way he could.
😎

One thing Jim would probably like me to emphasize right off the bat is the fact that his work in this area is only in the “preliminary” stages of development. I don’t know if it’s modesty or his engineering/science backrgound (or a little of both) coming out, but rest assured that his efforts thus far have still been very impressive!

In a nutshell, what he has been doing is growing various crops in five 4’x8’x6″ “flood and drain” gravel beds, in which he has also stocked Red Worms. Initially, he fed his worms only rabbit food (13-15% protein) – which the worms consume readily – but he found that nitrate levels in the system were on the low side. In an effort to boost nitrogen, he decided to start feeding with “de-fatted” soy bean meal as well, so as to bring the total feed-protein level up to 32-34%. The the soy meal does not break down as readily as the rabbit food though, so he does some form of pre-composting (although refers to it as “fermenting”) with it before adding it to the beds.

As efficiently as the system seems to work (for both plants and worms), Jim feels his current set up is a little “clumsy”, since it can be difficult to feed the worms and tend to the plants in a shared bed. As you’ll learn later, he has plans to create a system that has separate plant/worm beds (while still being linked, of course). 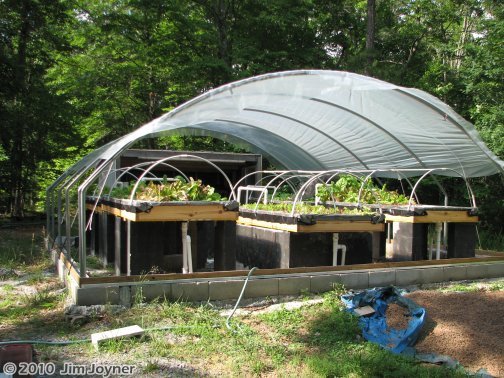 What’s interesting about an aqua-vermiculture system, as compared to a typical aquaponics set-up is that (based on Jim’s findings) you can essentially feed the worms the equivalent of 30% less food (than would be fed to fish), while still producing the same nutrient load for the plants! This in itself is pretty amazing, but here are some other advantages of the worm-centric approach: 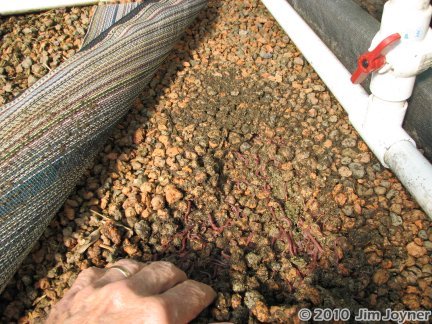 I mentioned above that Jim has plans for expansion this year. Here is what he has in mind:

1) I am modifying the present system (pictured above) by adding a 4’x4’x10″ bed with gravel for worms only. I will take most of the worms out of the growing beds and put them in the special bed. (Having some worms in you beds is still a good idea; they clean up convert all manner of wastes to nutrient.)

2) I am building a new larger system (3000 sq foot GH). I will grow the plants in 5, 4’x96’x6″ rafted water beds (much like UVI* except they don’t need to be as deep). Water will flow constantly through them. The worms beds will cycle every 6 to 12 hours to flush nutrient from the beds into a common sump. I will likely do the cycling with.a bell siphon in a storage tank.

3) For my garden, I am creating a aqua-vermi-composter. Essentially, it will have one 20 gallon tub water storage tank (imagine it setting on the highest level, This will drain every 12 hours (via a bell siphon tripped by the rate of water flowing in from a garden hose.) into two 20 gallon tubs about 4/5th filled with gravel and worms. The two tubs will drain directly into a 300 stock tank. I will dip or drain the liquid from this to feed my garden in the summer, particularly heavy feeders like corn. this has no pump (nothing is recycled), hardly any moving parts.

As you might imagine, I am certainly looking forward to receiving future updates as Jim’s new systems are set up and put into action this spring. I want to take this opportunity to send my sincere THANKS to Jim for agreeing to assist me in putting this preliminary article together.

All of this “vermiponics” stuff has my mind reeling at the moment, and you can be sure this won’t be the last you’ll read about it here! In fact, I am currently in the process of setting up my own mini test system and I hope to bring you a post about that a little later in the week!
😎

By the way, if you want to learn a little more about aquaponics in general, you might want to check out the aquponics page I added to the Compost Guy website quite some time ago (in need of some TLC – but still some helpful links there)