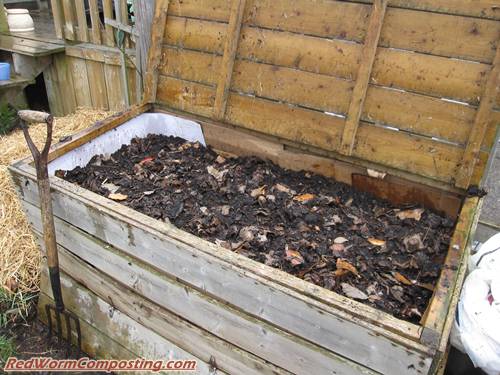 Things have settled down a little on various fronts, so I’ve found myself with a bit more time to “play” (i.e. time to start fun projects that I can write about here). The first thing I’ve been working on is a continuation of last year’s “Cardboard ‘n’ Coffee Vermicomposting” project. As some of you may recall, last July I basically just tossed stacks of cardboard drink trays into my big wooden backyard bin – along with other materials, including a large quantity of coffee grounds – in an effort to see how long it might take Red Worms (and other critters) to process the cardboard. OK, I also just generally needed some place to put all those stacks of trays! lol.

As is often the case with my fun projects, I basically forgot about the bin and moved on to other things – at least until later in the fall, when I needed a spot to dump a surplus supply of coffee grounds (I was continuing to pick them up from a local coffee shop, but my winter bed was well stocked by that point).

As things started warming up this spring, I finally started treating the bin more like a vermicomposting system than a garbage can (lol), adding deposits of food waste along with more coffee grounds, and the level of material seemed to drop a fair bit. That’s not to say it was remotely close to an optimized worm bin though – as per usual (when working with lots of coffee grounds) everything overheated and I ended up with lots of grayish, dried-out grounds, and barely a worm in sight! 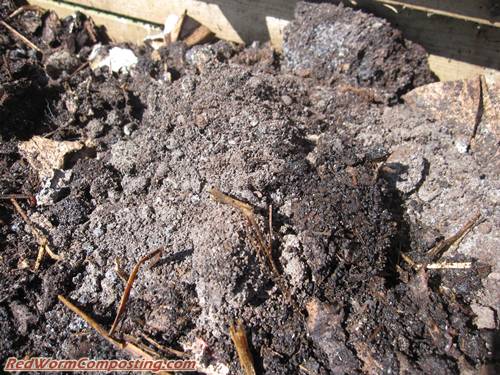 A short time ago I decided that enough was enough – it was time to finally get the bin working properly! Thus began the creation of “Bentley’s ‘ultimate’ backyard worm bin”!

In spite of the difficulties I was encountering with the coffee grounds, I knew the contents of the bin would actually provide me with a great starting place for creating a top notch worm bed. I figured all I’d need to do – at least initially – was to mix in LOTS and LOTS of shredded cardboard/paper, and to add LOTS of water. No “food” of any kind – just bedding and water. 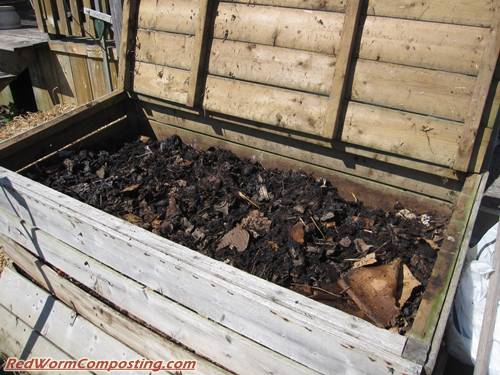 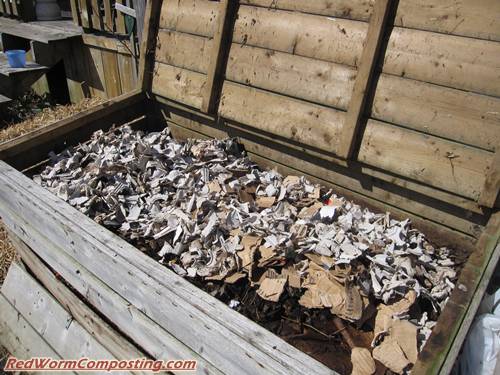 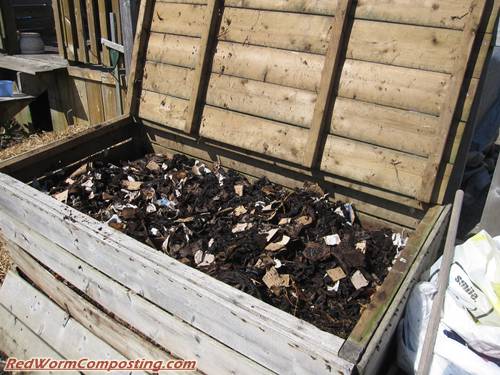 I must say the strategy has actually worked out quite well so far! The contents have continued to heat up, but not quite as much as before, and when I turn everything over it actually looks (and smells) quite good.

Today, I decided to take things one step further by lining the inner walls of the bin with sheets of cardboard. Normally it’s just slats of wood sitting between the contents and the outer environment, so everything stays pretty dry around the outer perimeter of the composting zone – especially when there are lots of coffee grounds. With the inner cardboard walls, the bin should still be able to “breathe”, yet retain a lot more moisture (another advantage of mixing in so much shredded cardboard as well). 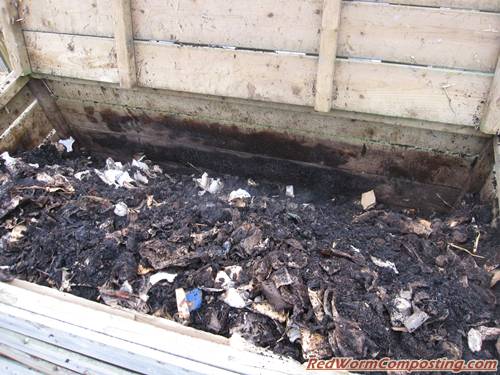 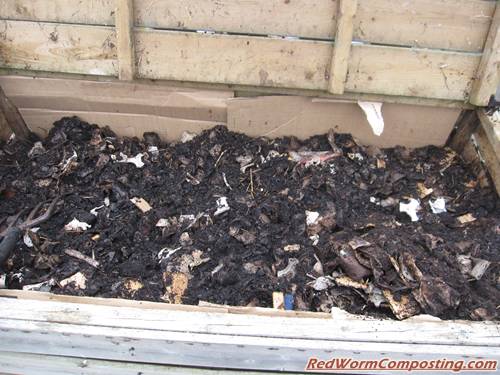 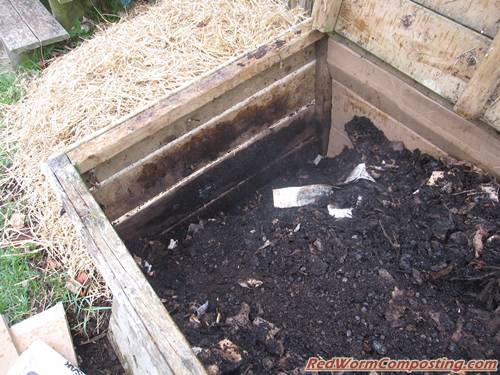 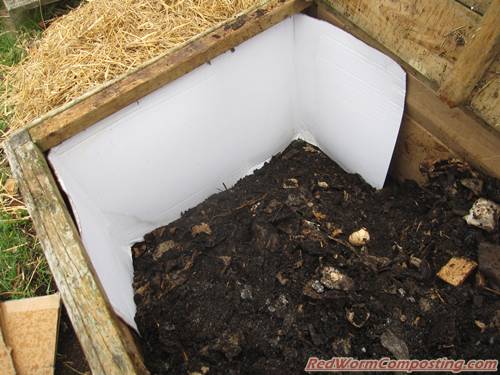 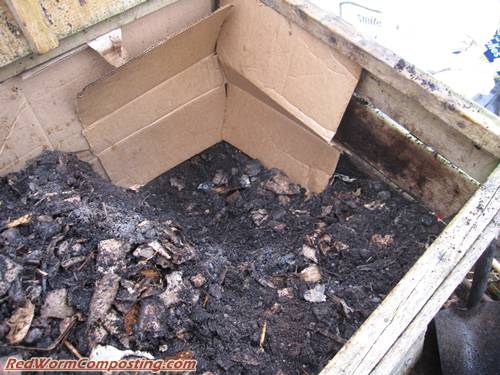 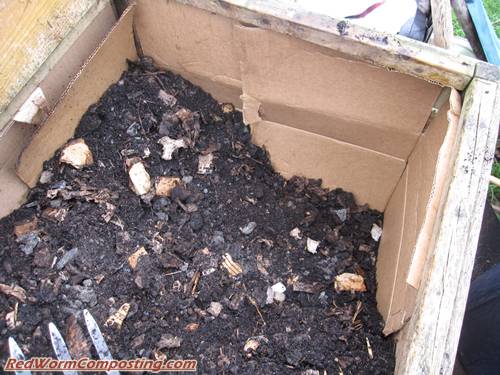 Once my inner wall was in place, I felt inspired to mix in even more shredded cardboard (and water down yet again). 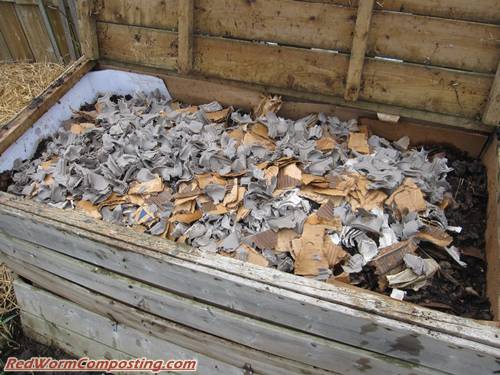 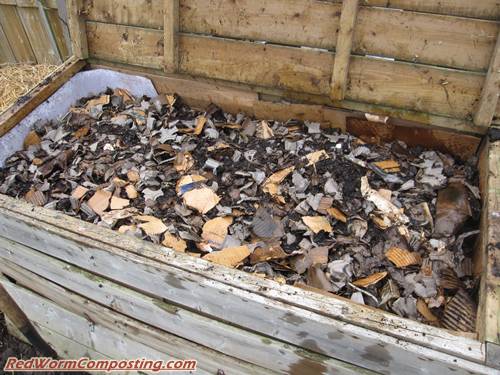 My original plan was to continue mixing in bedding until the bin was essentially full. I’m starting to think this might end up taking longer than expected, though! As the system becomes more and more optimized it seems to be composting more and more effectively – so the level of materials has continued to go down.

Nevertheless, I’m already having a LOT of fun with the project (feels like the “good ol’ days” – haha), and can’t wait to see how the system turns out. It seems as though the worms are already starting to move into the bin again, so I don’t think it will be too long before the bin is crawling with them.

Will keep everyone posted on my progress!
8)