Back in November I was contacted by Will Milliken, the person in charge of some composting toilets at an aquatic research center. He seemed pretty passionate about what he was doing (and excited by the results from using composting worms), so I asked about the possibility of sharing his experience here on the blog.

Here’s what he had to say:

My name is Will. I got a “real job” in 2000 as a Facilities Technician – Maintenance Mechanic at Stroud Water Research Center. It is an Aquatic Environmental Research Campus located in Avondale, Pennsylvania.

Being an environmentally conscious organization, they had installed a BioSun composting toilet system prior to my hiring date. The previous maintenance man put in the required mulch/wood chips of the time and then let it go.

When I started working here, it was brought to my attention that the composter was not properly maintained. I was instructed on how it should function. I tried to keep it aerobic by stirring it four times a year and adding a good compost made up of wood chips aged to the point of being broken down about 70%. This did not work as it would fill up to capacity every year and become anoxic (it gets a lot of input!).

I had to have the waste removed and start over every year. 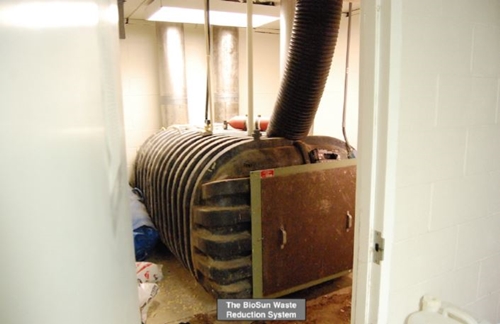 In 2012, we had a new LEED Platinum building added to our campus. It included two Clivus composting systems. I was trained by the Clivus representative on how to maintain these systems. Being structurally different from the BioSun, keeping them aerobic would be easier. Part of the system, when it is fully functional, is the inclusion of vermiculture. Specifically, Red Worms (Eisenia fetida). 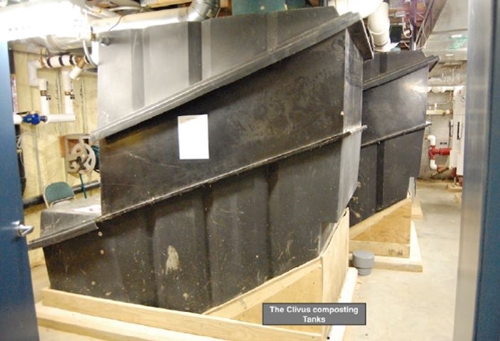 Before the Clivus systems were ready for the introduction of the vermiculture, I modified the BioSun to be friendlier to vermiculture also. I drilled holes in the front bulkhead to drain more liquid from the tank and installed an automatic pump out for liquid removal. I installed an automatic irrigation system to add fresh water to keep the environment from drying out. I then added a thick layer of bedding (Pine shavings).

Due to the amount of input the BioSun was ready for vermiculture before the Clivus. I purchased a pound of Red Worms from Uncle Jim’s Worm Farm. I won’t forget the feeling when they were delivered through the mail. A nice bag of wigglers.

I immediately added them to the BioSun. I did not know what to expect. With a large amount of input still going into this composter, I needed to stir every month. The first stirring showed clumps of happy worms!! The second or third month revealed a large ball of young worms!! They kept on multiplying and I removed some and added them into the Clivus with the same results.

The results were not totally the same for all three systems. One Clivus gets most of the attention and is working like crazy. They have even converted a good layer of the bedding. The other Clivus doesn’t get nearly the use and the worm population in that system has been slow to grow. The BioSun gets way too much attention. The women’s side of the tank has too much input and the worms do not like a lot of urine, so they do not work over there as well.

On the men’s side the worms are working over time and compost every thing, including the bedding. The men and women’s bathrooms all go into the same tank by the way. As a result of the over use, I decided to close down the system for a month to give the worms time to catch up.

In two weeks, they had moved into the entire tank and reduced the waste by more than 50%! They sure do work fast under the right conditions!

We try to encourage people to spread out their input and not go in the same place all the time. We have been adding our kitchen waste in little bits to supplement the diet of the worms. This too has had mixed results, but generally works out well. I may have to permanently close the BioSun to further modify it to be even friendlier to the worms

Thanks very much to Will for sharing his experience with vermicomposting toilets! Hopefully he’ll be able to keep us posted on his progress.

If anyone else has experience with worms in composting toilets I’d love to hear about it in the comments section!