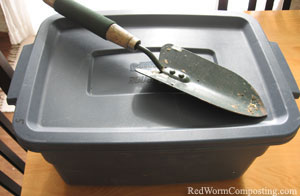 New to worm composting? Looking for some quick and dirty info before jumping in head-first? Well this is will be a great place to get started.