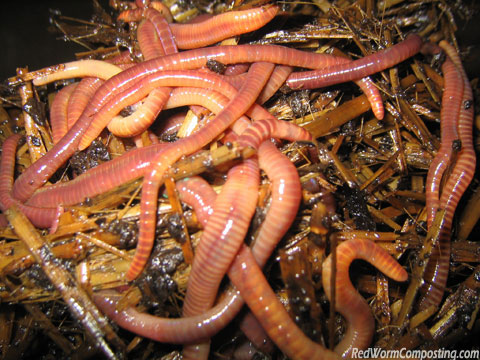 It’s funny, I spend so much time reminding people that ‘regular’ soil worms are not well suited for worm composting, yet here I am talking about raising ‘earthworms’. Be assured that the term ‘earthworm’ refers to a wide assortment of different worms, including those used for composting, and does not in fact solely refer to the ‘worms of the earth’ (aka the soil dwellers).

With that out of the way, let’s now talk about how to properly raise worms. I think a lot of people forget about the fact that they are essentially taking care of a living breathing creature – a large number of them in fact – when they start up a worm composting (or worm farming) system. In general, most of the composting worm species are quite tolerant of less-than-ideal conditions, but for the optimal performance of your worm system, your wiggly friends need to have their needs met.

The following is a basic (and brief) guide to the conditions required to raising earthworms effectively. Be assured, I will continue to add more to this page over time.

So what exactly do the worms need?

These are the major requirements (in no particular order) when it comes to taking care of your worms. Let’s now chat about each of them in more detail.

Moisture
Earthworms breathe through their skin and thus need to stay moist at all times. Anyone who has had worms crawl out of their bins will know from experience that they can shrivel up and die relatively quickly, so it is vitally important to make sure that the material in yoru worm bins/beds never dries up – in fact, you should be keeping your bedding as moist as possible. That being said, moisture content can be a double-edged sword. Too much moisture can interfere with one of the other mentioned requirements – oxygen! Water can only hold a certain amount of oxygen (a lot less than air), and as such can go ‘anaerobic’ (ie lose its oxygen) quite quickly – especially in the case of organically-rich liquids which are full of oxygen consuming microorganisms.

Many people refer to the ideal moisture content of a worm bin as being similar to that of a “wrung out sponge”. This is an easy do-it-yourself determination of moisture content that has been borrowed from the composting (ie ‘regular’ composting – not worm composting) field. Research has actually shown that composting worms typically prefer a moisture content higher than that typically recommended for thermophilic composting – even as high as 80-90% (Edwards & Lofty, 1996). That being said, the ‘wrung out sponge’ level of moisture is almost certainly a better approach – especially for those with limited worm composting experience – since it can be very easy to end up with too much moisture in your bin. This is especially true when using sealed plastic bins.

Warmth
Red Worms (Eisenia fetida) are certainly amongst the most cold-hardy of the composting worms. According to Glenn Munroe, author of the ‘Manual of On-Farm Vermicomposting and Vermiculture’ (you will need Adobe Acrobat reader to view), adults of this species have been known to survive being encased in frozen material, and that cocoons are well adapted to survive sub-zero temps for extended periods. I know from personal experience that it is relatively easy to keep a population of Red Worms alive outdoors over the winter with some protection from the cold. Of course, keeping the worms alive is far different than providing them with the requirements for optimal performance! Interestingly enough, optimal temperatures for breeding can be a fair bit different than those for overall worm growth. According to Edwards (1988), the optimal temperature range for breeding Eisenia fetida (red wigglers) is 15-20C (59-68F), yet maximum growth (weight gain) occurs closer to 25C (77F). A similar pattern is reported for other species as well. Speaking of other species, I should also mention that the tropical composting species, such as the African Nightcrawler (Eudrilus eugeniae) and the Blue Worm (Perionyx excavatus) will actually die at temperatures below 10C (50F).

On the other end of the spectrum are the upper limits for worm survival. Eisenia fetida once again outshines the competition, tolerating bed temperatures reportedly as high as 43C (109.4F) according to Reinecke et al. (1992). That being said, it is definitely best to avoid letting your worm bed temperatures go above 30C (86F) whenever possible, as the success of your worms will decline markedly past this point.

Food Source
As I’ve discussed elsewhere on the site, it is actually the microorganisms growing on waste materials that provides the main source of nutrition, not the material itself – but of course the worms do manage to slurp up the rotting material in the process. This is the reason I highly recommend setting up your worm bin (with bedding and ‘food’) well before you even get your worms. By the time you add the worms to the system there will be a very rich microbial community waiting. Ever since starting to take this approach myself I had no problems with worms trying to escape from a new bin.

The best food sources are therefore the materials that support the richest microbial population. This helps to explain why animal manures are pretty well the best material to grow composting worms in! One important factor to keep in mind when considering the potential of various waste materials is the carbon to nitrogen (C:N) ratio. Generally speaking, a C:N in the range of 20:1 to 30:1 is going to be ideal (similar to thermophilic composting). Below this range there is the tendency for nitrogen to be lost as gaseous ammonia; above this range decomposition can proceed more slowly, with N being the limiting factor.

Darkness
Worms prefer it dark – there is no doubt about it! In fact, extended periods in direct sunlight can kill worms. One of the commonly used techniques for keeping worms in a new bin relies on this very principle. If you find that your wigglers are attempting to migrate out of the bin (and don’t notice any obvious hazard that is causing the stress) you can generally keep them where they are by shining a light directly overhead!.

Some guideliness for maintaining darkness for your worms can include using opaque (ie not ‘see-through’) containers, keeping your worm systems in low light areas (not really necessary if you take other measures), and providing ample bedding material to help block out the light. Don’t let this scare you too much though – you can still play with your worms from time to time without harming them.
🙂

If you are keen to observe your worms for extended periods (ideal for a classroom setting) you can set up your own ‘dark room’ using red lights (this wavelength of light does not bother worms).

Oxygen
While way more tolerant of low O2 concentrations than us, composting worms are still aerobic organisms, thus it’s important to make sure your worm bin doesn’t go anaerobic on you. You need to be especially cautious when using plastic containers, since they do not ‘breathe’ the way some other materials (such as wood) do. If you are using a homemade plastic tub worm bin you should probably drill some holes in the top and sides (1/8″ drill bit should work well) – you don’t need to go too overboard though – obviously you don’t want the contents of the bin to dry out, or to let too much light in. If you have some sort of catch tray or lower reservoir (as shown in my ‘deluxe’ worm bin video), drilling some drain holes in the bottom of your bin (perhaps 2-4) will help alleviate the potential for water pooling in the bottom of your bin.

Another great way to encourage increased oxygenation is the use of bulky bedding materials like shredded cardboard, paper and leaves (although paper can sometimes become matted down, thus impeding air flow). This allows air to reach the inner zones of the composting mass, where the worms are typically hanging out. The choice of container for your worm bin is also an important consideration. You will want a container that has a high surface area to volume ratio. A relatively shallow Rubbermaid tub for example, is much better than a bucket since it encourages much greater air-flow throughout the materials contained inside.

The activity of the worms themselves will also aid in aerating the system, so unlike a hot composting pile, you won’t ever need to ‘turn’ your worm systems.

So there you have it! As you can see, successfully raising your worms depends on a small handful of important considerations. If you master these variables you’ll be amazed with the success of your worm population!
Once again, I will definitely be adding more to this page over time so be sure to check back periodically – or better yet, sign up for my newsletter and be kept up to date on all the new and exciting developments on the site!