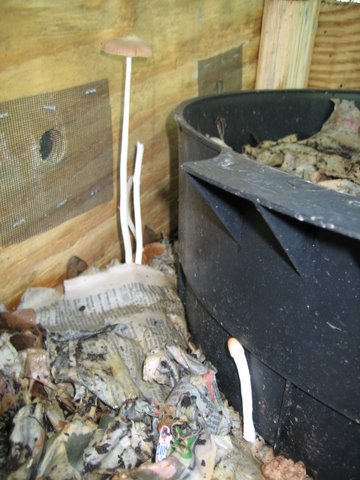 After a promising start, our ‘Reader Photos’ section has certainly been quiet. Thankfully, fellow ‘wormhead’ Dwayne C. has helped to get things back on track with this cool photo of mushrooms growing in his worm bin.

It’s not something you see every day, but it is kinda cool when it happens. It has even had me wondering if one could grow edible mushrooms in some sort of worm composting system. I remember reading an article in the print version of Worm Digest (published an number of years ago) describing how the author had put a gourmet mushroom kit in her worm system and ended up being able to harvest mushrooms for several months.

Your chances of seeing actual mushrooms (the fruiting bodies of certain groups of fungi) are much greater in outdoor systems (for obvious reasons) and can be closely linked to the type of material you have in your bin. Manure is an example of a material that commonly is colonized by certain species of mushrooms. Having lots of carbon-rich bedding materials in your bin can also encourage fungal growth.

Last summer I used lots of straw in my outdoor bin and ended up with some big mushrooms in the bin (as shown below).

Generally, the mushrooms don’t last very long (in my experience anyway). I always imagined the worm feasting on the fungal mycelium below, but I’m not really sure if that happens (worms definitely eat fungi – but I’m not sure if they’d actually consume mycelium while it is still alive). 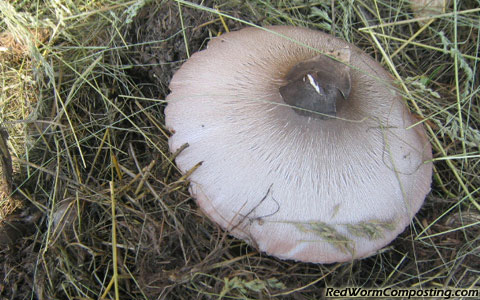 One of the mushrooms that appeared in my outdoor bin last summer.

Keeping Reds and Nightcrawlers In One Bin