Is There Such A Thing As “Too Much Bedding”?

Some good questions from Sara:

I bought worms from you 2 months back. I was out of town for a week in June and no one tended the bin. Ended up with water sitting in the bin due to moisture. It smelled TERRIBLE! I stopped putting food in and put a bunch of shredded cardboxes in over a few days. After a few days it got better and I think I saved it. Problem is, the humidity here in New England is pretty bad, and I feel like every time I open the bin it’s too moist. So, I put more paper in.

So my question is, can I put “too much” shredded cardboard (etc) in the bin?

I tried going through your reader questions but I only found the setting up box paper to scraps ratio etc.

Also, bugs. There are bugs in my box and I’m not sure what to do about them. Can you get me pointed in the right direction?

Do you have a post/pictures on how the bin it’s supposed to look after a month or two? I look in my box now and I see a bunch of shredded paper and food scraps but not…well compost. Sure it takes more time but how is it suppose to look inside the bin? In every picture I’ve seen, the bins look like they have a lot of dirt/compost/mud etc. Mine doesn’t really look that way…

Firstly, I want to commend you on adding more absorbent, bulky bedding materials to deal with your swampy bin conditions. This is an excellent strategy – and something I recommend all the time.

Moisture is definitely a challenge when you are working with an enclosed, plastic worm bin (I am assuming this is what you are using). For starters, my suggestion is to make sure the bin is receiving enough air flow. I used to drill LOTS of holes in my plastic bins, but I’ve since switched to much larger (but far fewer in number) openings. I usually cut out triangular or diamond-shaped holes – about 1-2″ across – in the lid and upper sides using a utility knife.

Here are some pics to give you an idea of what I mean. 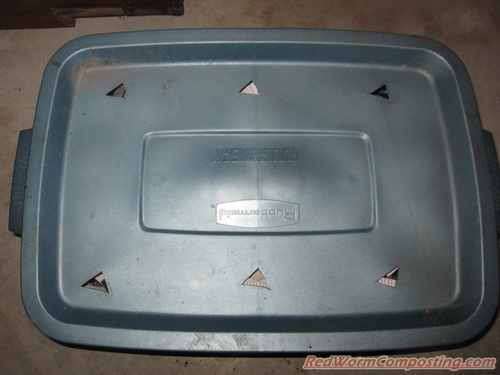 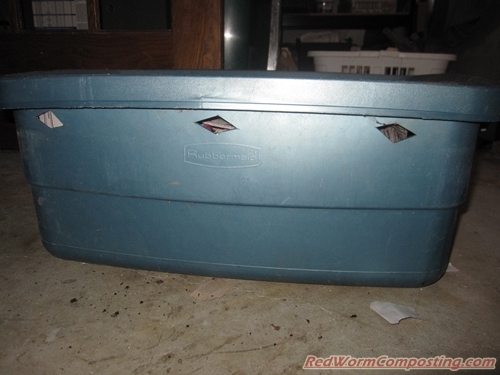 I’ve found that this greatly improves the air flow. It has the added advantage of helping you avoid those jagged drill hole edges that can potentially harm your worms.

I also recommend maintaining a really thick layer of dry(ish) absorbent bedding over top of your worm zone at all times. This will help to soak up excess moisture, and provides you with an ongoing supply of bedding that can be mix in with your food as it gets added. If you can stomach the idea, leaving the lid off completely, and using only the thick bedding layer as a cover would actually be the best approach.

Assuming the bin is indoors, you likely won’t have any excess moisture issues to deal with.

Now, let’s get to your main question about “too much bedding”.

Once upon a time I probably would have told you there’s “no such thing as ‘too much bedding'”, especially since most newcomers (in my experience) seem to put far “too little” bedding in their systems when first setting them up.

Over the years, however, I have refined this stance somewhat.

I will still say it is FAR better to err on the side of “too much bedding” than “too little bedding”, since it can help you to avoid a wide range of unpleasant situations. BUT, if your goal is to produce as much high quality vermicompost as quickly as you can, then yes, excessive amounts of bedding can impede your progress – especially in a plastic bin system.

My advice is to make sure the particle size of your bedding is fairly small (ideally 1-2″), to mix in some living materials if at all possible, and again, to make sure you have excellent air flow.

It’s very important to remember that there is a complex ecosystem at worm in a vermicomposting system, so the presence of other organisms should never automatically strike fear into your heart. I try to encourage people to view most critters as “indicators” – in other words, if you start seeing LOADS of one particular kind of organism it’s an indication that the balance has shifted in favor of that particular organism, and potentially away from “ideal” for the worms.

I’ll be the first to admit that some of the flying insect inhabitants (primarily fruit flies and fungus gnats) can be a real pain! If this is what you are dealing with, I highly recommend checking out this post: Getting Rid of Fruit Flies and Fungus Gnats. If you want an overview of some of the other common creatures in a worm composting system, I recommend you check out my “Worm Bin Organisms” video.

Lastly, you were wondering about what a bin should look like after a month or two…

As with most questions related to vermicomposting, my goto response is “it depends”! There are a wide range of variables that can impact the processing speed, and overall effectiveness of a worm bin, so there is no one single correct answer, or in this case, “look”. We’ve already talked about some important factors – moisture content, aeration, bedding amounts (overall C:N ratio), particle size. Another really important one is temperature.

I’m guessing ambient temps at this time of year aren’t impeding your progress (assuming you are in the northern hemisphere), but during cooler times of the year, it is very common for processing speeds to slow down considerably – especially in outdoor, or semi-outdoor (eg in a garage) systems.

All that being said, if you still want to know what a typical (plastic, enclosed) reasonably-well-maintained “home bin” might look like after a couple of months, this picture should at least give you some idea. 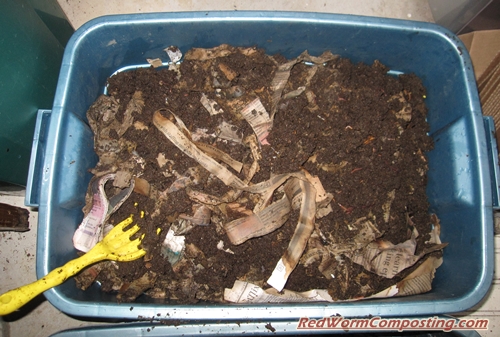 i.e. there should be a fair amount of dark vermicompost visible by this point, but also still plenty of unprocessed bedding.

It’s important to note, also, that you shouldn’t ever expect all your bedding to be completely processed, regardless of how long the system has been going (although, you’ll certainly see much more of it gone in a deeper, flow-through system by the time you start harvesting). Bedding that’s not processed can be recycled back through your systems as an excellent living material (be sure to check out the guide I linked to above if you are not familiar with this term).