This question comes from Mario. Like many other people, Mario is curious about various worms he has found in the ‘wild’. Here is what he had to say:

HI there!
I was recently searching for worms after a couple of rain days at church. There´s a lot of just dirt with a little of grass and some roses. To my surprise I found at least 60 worms, there very different from the red wigglers I recently purchased, my question is: are the worm I found on the moistured dirt, are they nightcrawlers? I realy dont have any idea what kind of worms they are, some of them are a little white with lots of veins on there body, some are thick and very
brownish. Hope to hear from you soon. Thank you very much, by the way your web site is one of the best I have found, probably top 10 on the web.

Wow – ‘top 10 on the web’?? I’ll assume you are talking about vermicomposting sites. Regardless, that is quite a compliment, Mario! Thanks very much.
🙂

You’ve asked a great question! I know a lot of people get somewhat confused when it comes to various species of earthworms. The wide array of common names floating around certainly don’t help the situation at all! You mentioned “nightcrawlers”. There are three different species of worm (that I know of) that are known as nightcrawlers. One of course is the European Nightcrawler (Eisenia hortensis) – a worm I’ve been talking about a lot, ever since starting my own euro worm bin. Then there is the ‘Canadian Nightcrawler’ (Lumbricus terrestris), also known as the ‘Dew Worm’. Finally, there is also an ‘African Nightcrawler’ (Eudrilus eugeniae).

Lets, chat very briefly about each. 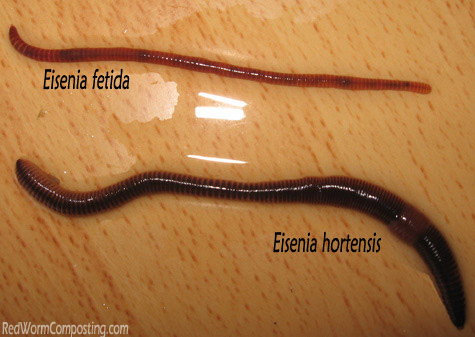 The European Nightcrawler (Eisenia hortensis), also known as the ‘Belgian Nightcrawler’, is a larger cousin of the Red Wiggler (Eisenia fetida). Like E. fetida, you won’t generally find this worm in ‘regular’ soil habitats, unless there is an accumulation of rich organic matter. The prime habitat for a worm like this is a compost heap or manure pile.

The Canadian Nightcrawler (Lumbricus terrestris) is a very large worm (unfortunately this picture doesn’t provide any perspective) that is very popular for fishing. Many people assume they can start up a worm bin with this species, but alas they are not well suited for this habitat at all! Dew Worms are deep soil burrowers, creating extensive tunnels down through numerous soil layers. During heavy rains, or on moist nights they often move to the surface to feed on organic materials (leaves, dead grass etc). They require cooler temperatures and far less crowded conditions than composting worms – as such, they won’t thrive within the confines of a household worm bin.

Like the European Nightcrawler, the African Nightcrawler (Eudrilus eugeniae) is another species of composting worm. It is native to certain tropical regions of the world, which makes it less tolerant of cool conditions (according to the scientific literature, this species will die if temperatures fall below 10C/50F), but it is apparently a very effective composting worm and breeds very rapidly under ideal conditions.

Back to your question, Mario…

It’s tough to say for sure what kind worms you found, other than to say that they are almost certainly ‘soil worms’ – i.e. species not well suited for worm composting. I’m not sure where you are located, but there is certainly a chance that there were Canadian Nightcrawlers among the worms you found, especially given your “thick and brownish” description for some of them.

Anyway, thanks again for the great question – hopefully my response has helped!