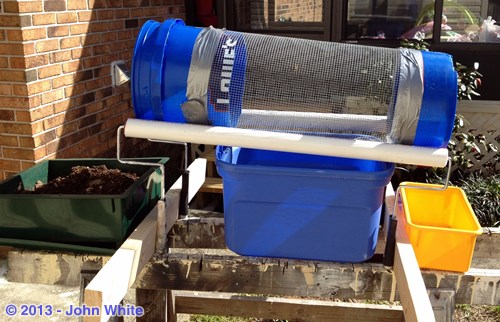 Regular RWC reader and discussion participant, John White, recently told me about the success he was having with his new DIY vermicompost/worm screener. This nifty piece of equipment (shown above) is based on the “Low Cost Homebuilt Worm Casting Harvester” design (freely) available on the Washington State University website.

Here is what he wrote :

A while back I sent you an email that had some links on it for compost tumble harvester plans. You told me to send you some pics if I ever made one. Well I made one; and I have to say that I LOVE it. It is much faster than what I had been doing before. It was very easy to make and only cost maybe $30ish. It gets about 95% of the worms out and I would say almost all of the unfinished compost.

Anyways here are the pics…

The green one is the starting product. It was from my WF360. The small yellow tub was all the worms and unfinished compost that came out of the end. and obviously the clear container is the finished product that came through the screen.

What I did last time i used this was gave it a few weeks after I harvested the material and then put some watermelon on top and harvested all the little worms that made it through the screen. 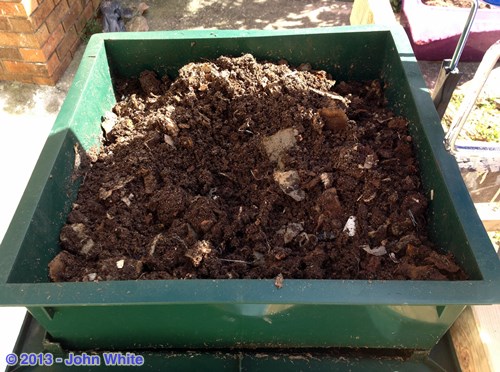 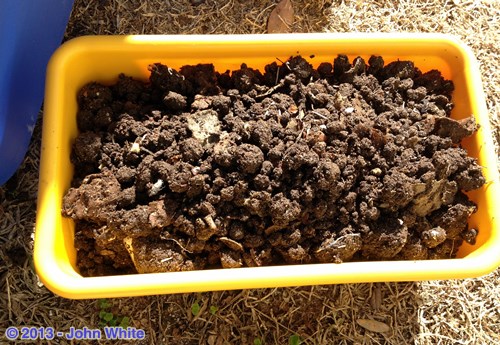 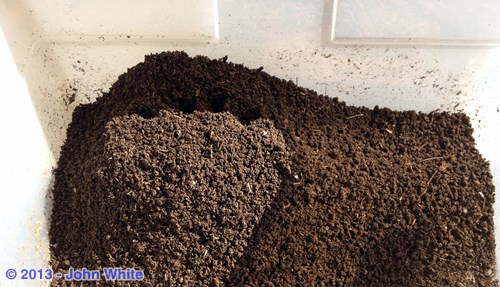 And from a follow-up email (responding to some questions I had):

Almost all of the worms ended up in the container of bulk stuff. Only the really small worms fell through the screen.

I have done this twice now. The first time I took the time to really let it dry out a lot. It worked, but this time I need some room cause my worm inn is full and I am trying to get casting for replanting my yard this year…so I took the lid off of my 360 for 2 maybe 3 days and just let it air dry a little. I probably could have gotten more casting had I given it more time to dry…but after looking at the bucket of bulky material…I don’t think I would have gotten to much more castings. Now I will just dump these back onto my 360 and let the worms finish it up.

I was really pleased with the speed. If you get the right bucket underneath you can really spin the barrel quite fast and process a lot in a short time.

The harvester uses 1/4″ “hardware cloth” screen, and John mentioned that he already had the screen and paint rollers – so a more realistic cost for someone starting from scratch might be closer to $50.

Thanks very much to John for allowing me to share this. Definitely seems to be a great (and afforable) screening option!
8)