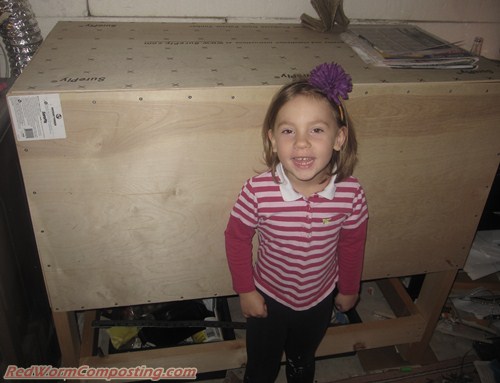 Just wanted to let everyone know that my VermBin48 is basically finished. I (gradually) built most of it with my dad outside over the course of several weeks, then moved it indoors (also with his assistance) so as to be able to use it all winter long. I say “basically finished” since I still haven’t attached the lid or installed the lid vent(s).

That being said, as far as I’m concerned it is ready for action! Setting up my VB48 system will likely be a gradual process as well, but I’m certainly excited that the wheels are in motion and that I’m now able to start writing about my adventure!

My 5 year old daughter, Adaia, happened to be home sick from school today, so I came up with the idea of letting her paint the bin. It’s always fun getting her involved in my vermi-shenanigans (she seems to enjoy it as well) – and between you guys, me and the fencepost, I think it will help my wife feel better about seeing a giant worm bin next to our washer and dryer!
😆

Adaia made a good start on the bin (before deciding she wanted to do something else), and it’s nice to see some color! I have little doubt that over the course of the next few weeks it will end up with a LOT more paint on it, along with all manner of princess and Dora the Explorer stickers. 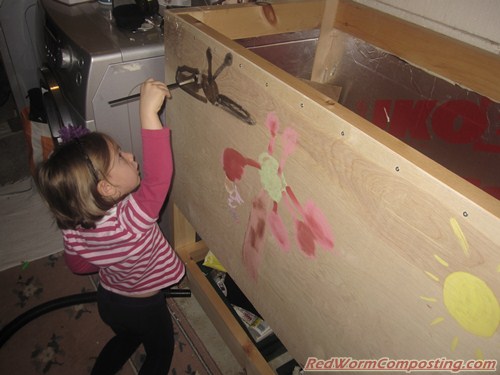 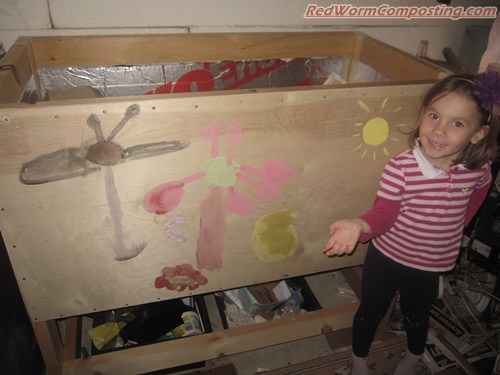 One of the advantages of taking so darn long to get my own VermBin up and running is that I’ve learned from the experiences of those (many) who have gone before me. It seems that one of the fairly common issues has been premature holes in the cardboard/newsprint “false bottom”. In light of this, I decided to go REALLY crazy with mine! I started with multiple layers of corrugated cardboard down over the floor bars, followed by many many layers of newsprint (folded up the sides). 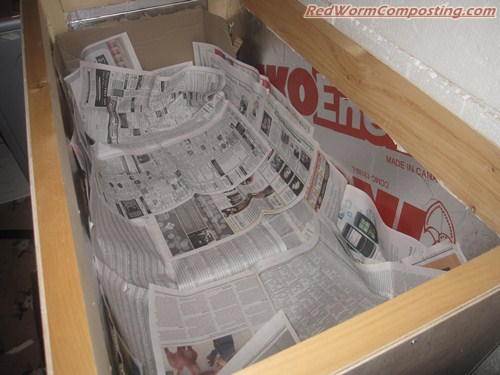 I’m not overly concerned about the fact that it will likely take a LONG time for the bottom to rot out enough to start harvesting. I just want to start by having lots of fun breeding loads of Red Worms and processing loads of organic waste materials – and we’ll take things from there.

As you can probably tell, I did end up deciding to add some insulation. This was primarily my way of protecting the plywood walls of the bin (I decided not to bother with wood preservative), but it will likely also help to keep the contents warmer during cool winter months (gets chilly down in the basement) and help to keep more moisture in.

I can see that it’s going to take a LOT of bedding (and other materials) to get me anywhere up near the top of this bin. I’ve started adding some shredded newsprint and cardboard today, but have a looooong way to go! 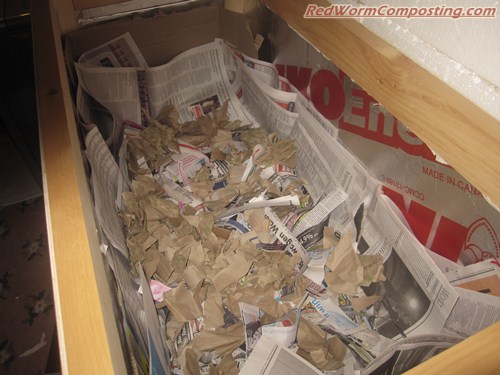 I have quite a lot of wet shredded cardboard sitting outside, so I’ll likely add all of it once my layer of dry material is a bit thicker (so as to avoid having water potentially drip down through the false bottom). I also have plans to add quite a bit of well-aged horse manure once I can get my hands on some, and of course plenty of food waste as well.

As for worms, I will simply be transferring lots of worm-rich material from my outdoor beds to the new bin once I feel it’s ready to receive them (likely once the aged manure has been added).

By the way…if you happen to be a VermBin Series member, you’ll be receiving a guide (and/or videos) describing my building experience in much greater detail. I’m hoping to get that put together sometime before Christmas – just trying to wrap-up a much larger RWC project (more on that soon, I promise) in the meantime.

Vermivember – a Month to Remember!

Tomato Juice in Your Worm Bin?