I’m sure some of you must be wondering what ever became of Neil’s VB24 series (there hasn’t been an update since the beginning of October). Well, as is often the case in my own world, Neil ended up very busy with “life stuff” (in his case, this involved attending teacher’s college while holding down a full-time job) and simply hasn’t had the time to provide any more updates. Of course, this is totally understandable, and I will always be grateful for everything he has able to share with us (not the least of which was his building guide, of course!).

When long-time reader, and good “worm friend”, John Duffy, recently told me about his own VB24 building experience, I decided ask if he’d be willing to let me share some of his updates here – and, as you can probably tell (wink, wink), he say yes!
8)
(thanks again, John!)

Below is John’s first installment, along with some photos of his new VB24: 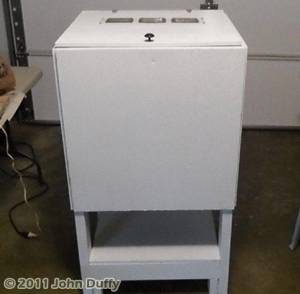 Building the VB24 was really quite simple. The plans were very concise. (I would, however, suggest screws vs nails just for strength)

I took my time & used the “measure twice, cut once” school of construction advice. I would also suggest using a “helper” to help hold the wood while cutting it so as to reduce the chance of the circular saw kicking back at you at the end of the cuts. (Yeah, I have the scar from a bad decision)

I personally didn’t have a “helper” available so I used several 1 gallon paint cans (evenly spaced) to support the wood as I made my cuts…As any DIY guy can attest, sharp tools are much safer than dull tools.

I had a new carbide tipped blade in my circular saw so sawing the wood cleanly was a breeze. Cutting the conduit would have been a lot easier if I would have had the presence of mind to invest in a new hacksaw blade.

I painted the VB24 with 2 coats of exterior acrylic paint inside & out and let it dry thoroughly before adding my worms. Tonight, I added the contents of my 5 tray stackable worm bin. I had probably 2 lbs of redworms and maybe a pound of European nightcrawlers. I put down a layer of cardboard to cover the grate & plugged any gaps with moist newspaper. I live in southeastern Indiana so it’s a bit on the chilly side in these parts. I have the bin in an unheated garage where the air temp is about 45*… The bedding temp is holding at 50*…I plan to add some fresh horse manure to help raise the bedding temp. 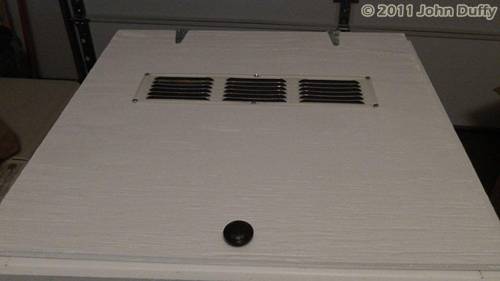 I’ll try to send you monthly updates as to how the bin is performing… I suspect that things will be slow-going until about March when things warm up a bit around here.

…”You might be a wormhead if” you ask Santa for an 18″ compost thermometer…Yup, I did.

Have a great weekend!
John

Fountain of Youth – In Worm Poop??