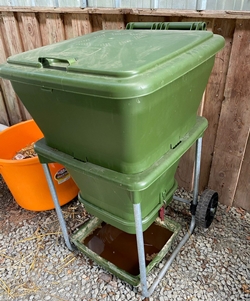 For a number of years now I’ve been seeing a lot of positive feedback for a vermicomposting system known as the “Hungry Bin”. To be honest, I really didn’t see what all the fuss was about. It seemed incredibly expensive* and, in my humble opinion, looked more like a recycling bin than a highly-effective vermicomposting system – let alone a “continuous-flow” system!

Still, I “secretly” hoped that one day I would have an opportunity to test one of these things out, so I could at least base my (skeptical – haha) opinions on some real world experience!

Thankfully that opportunity arrived, due to my involvement in an exciting new composting business project on Vancouver Island (BC, Canada). The hungry bin is just one of many different composting systems we will be testing out extensively (I will share more details about the project itself in another blog post at some point) – but luckily I had the opportunity to get actively involved in the initial set-up of this one while I was on-site for 6 days in mid-August.

Right off the bat I was impressed with the size, the quality of the construction, and the overall design of the bin. It became a lot more obvious why it has such a high price tag compared to many other home worm bins. The main container has a shape like an inverted pyramid, with an open bottom and top (the latter with a large, loose-fitting lid), that sits in a sturdy frame. There is a nifty snap-on drainage floor – that can be removed when it comes time to start harvesting finished vermicompost – and a leachate catch tray that sits on the ground below. 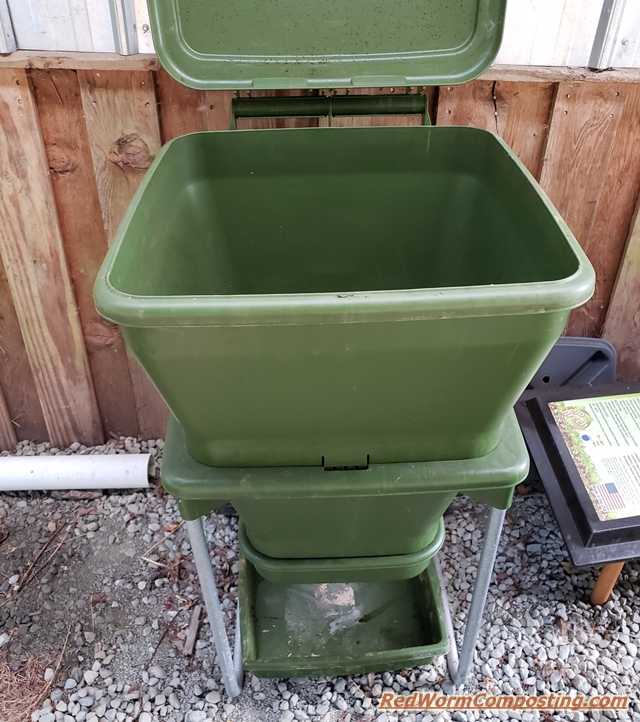 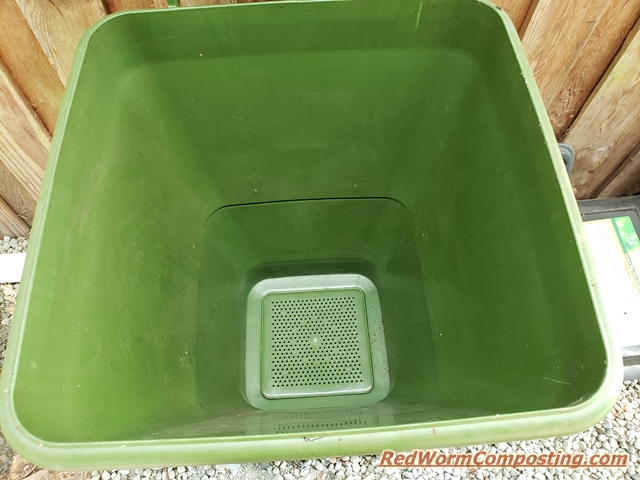 Me being me – I decided we should get things started with a nice carbon-rich false bottom. My project partner (and owner of the property), Andrea, happened to have some “Effective Microorganisms” (EM) liquid spray on hand so we figured that would add some “life” to the bedding while also moistening it. 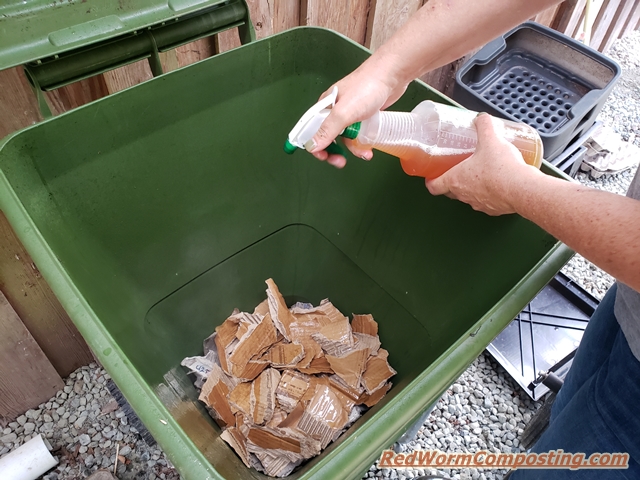 Based on the size of the bin I was a bit concerned about the potential for it overheating, so I felt it was important to establish a safe “worm zone” close to the bottom, where temps would likely remain cooler. We have another 3-bin worm composting system going elsewhere on the property that has been receiving lots of hay and other bedding, goat manure, and kitchen scraps – and has a very healthy population of Red Worms – so transferring some of this wormy habitat/food material over seemed like a good way to get things started with the hungry bin. 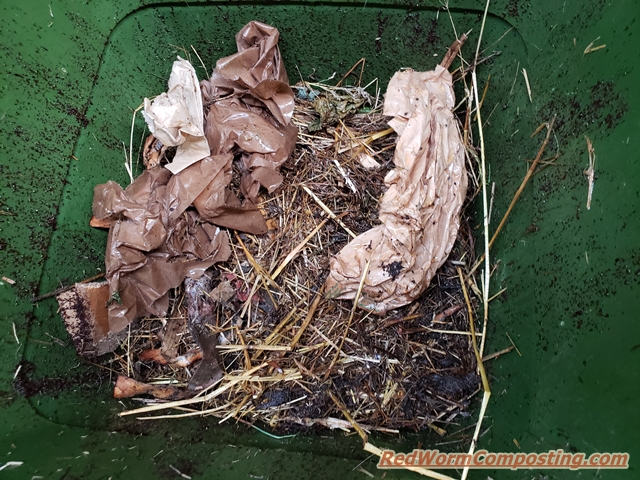 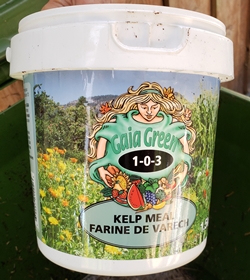 Andrea also happened to have some interesting “Gaia Green” horticultural amendments – kelp meal, glacial rock dust, and alfalfa meal – so we figured sprinking in some of each during the set up process might help to boost things a wee bit more.

It is important to note that these types of amendments are not remotely mandatory. Just generally, my recommendation for setting up new systems is simply to take advantage of the resources you happen to have available. There is no one “perfect” set-up approach (but the overall set-up strategy is still worth paying attention to – I will review this further on). 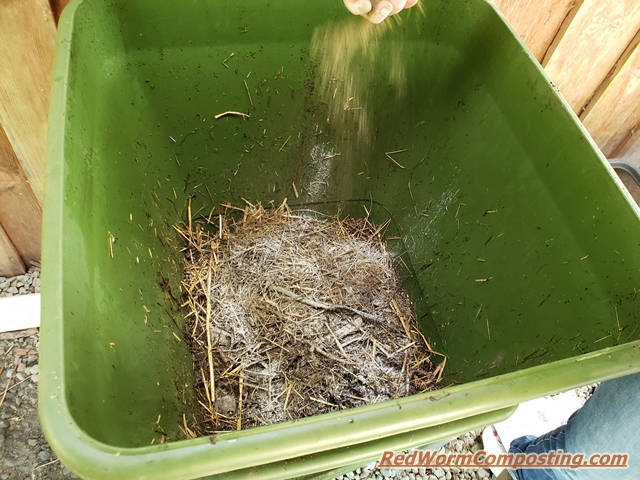 I wanted to make sure this system was “bedding-heavy” early on, partially to help avoid excess heating and other challenges, partially so as to help separate the worm zone from the active feeding zone (until the worms are ready to move up, of course). 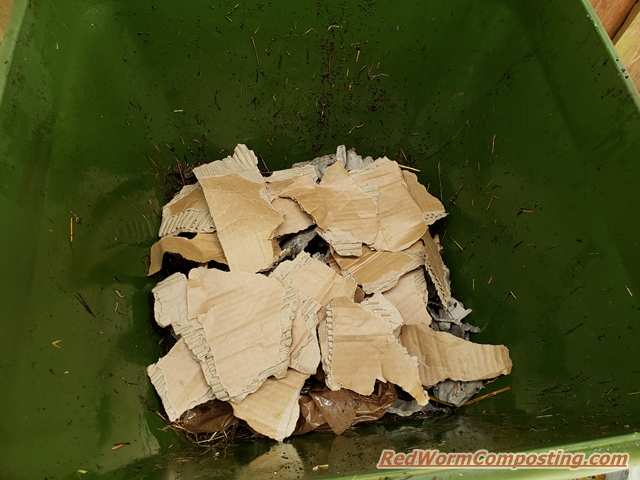 It’s worth noting, though, that what looks like straw in the images usually had at least some goat manure mixed in, so there was definitely some nice food value available all the way up. 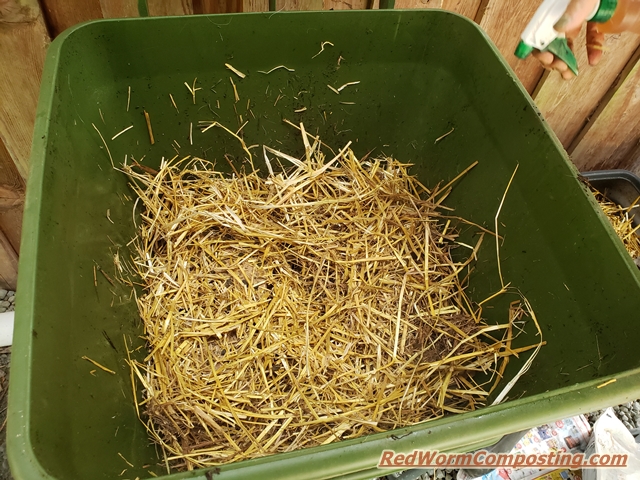 Apart from cardboard and straw/hay, another bedding material added (also simply because it happened to be available) was coco coir. You can see it underneath the food waste deposit in the next image – which also gives you an idea of when/where the food scraps were added during the set-up process. 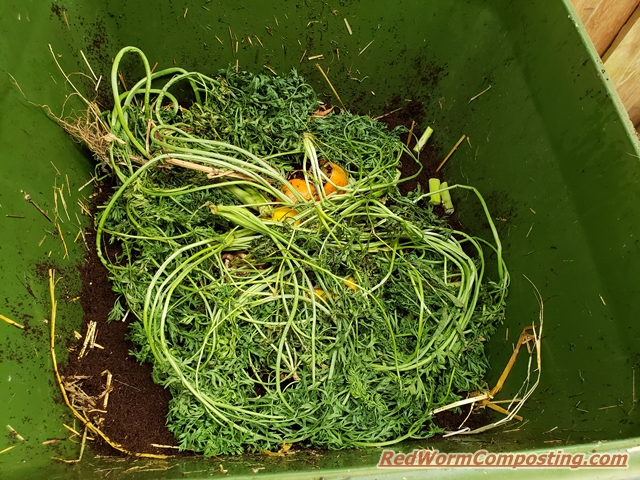 As always, I wanted to finish things off with a thick layer of bedding (ish – lol) material. And, apart from the EM liquid spray along the way, as I recall we added some water with a watering can at the end as well.

Andrea’s approach in the past (she has been working with Hungry Bins for some time) has been to simply pour the drainage liquid back through the system on a fairly regular basis. This sounded like a solid approach to me (as long as leachate not left to stagnate for too long) since it provides a means of recovering a lot of the “good stuff” that drains out, while also keeping the system nice and moist! 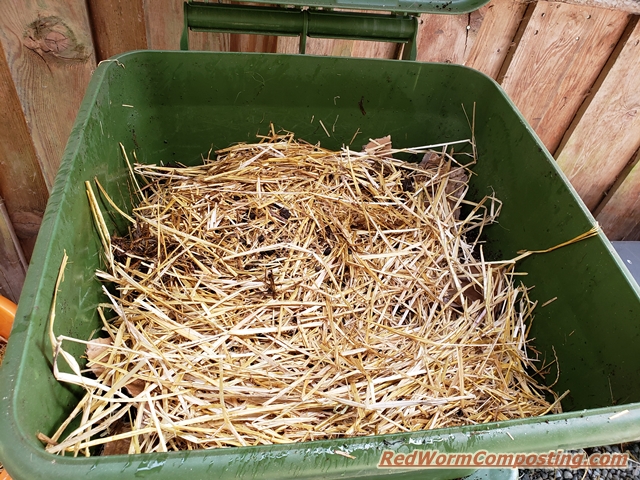 Circling back to what I said earlier about there being countless great ways to set up this (and many other) system(s)…I do feel it’s still important to review our overall approach with this set up. It’s something I highly recommend for most larger systems.

I have referred to it elsewhere as my “safety sandwich” approach, and it’s a key part of my strategy for setting up any sort of in-ground system. The basic idea is that you create a “safe zone” for the worms, low down in the system, with a bedding-worms-bedding layering approach. Start with a thick “false bottom” of shredded cardboard (and/or other bedding materials), add worms – ideally worm-rich material from another active system – and then top everything off with a nice thick layer of bedding.

How you set up the rest of the system isn’t nearly as important because the worms have a safe place to hang out. Higher up, adding concentrations of food waste and other rich worm foods is just fine. It will break down over time, and even if the worms aren’t ready to move up, nutrient-rich liquids will drip down into the bedding-loaded worm zone and boost the available nutrition down there.

Now that I am back home, I will be relying on Andrea for system updates, until I head back to the project site in November. So far, she has been adding a bit more food waste and additional cover bedding, but mostly letting the system mellow out. Based on her most recent update (with photos) it looks like we may be ready to ramp things up a bit. Levels have dropped nicely and the worms seem active throughout the system.

P.S. I would love to hear from anyone who has worked with a Hungry Bin! Pros? Cons? Any and all feedback appreciated.