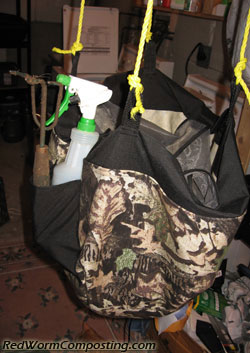 Some of you may recall me starting what I referred to as the ‘Worm Bin Journal‘ early last spring – a special project originally intended for newsletter members only. Well I’ve decided to start up another journal project – but this time it’s the Worm Inn Journal, and it will be a completely public affair.

As I mentioned not too long ago, I ordered a number of Worm Inns (to sell up here in Canada) and was given a complimentary test system – something I’ve been meaning to get set up ever since. I think the major issue slowing me down was my intention to add 3 lb of worms. Basically this means 3 lb less available to be sold to customers. Given the consistent demand for worms this fall, I opted to postpone the set-up of my Worm Inn.

Finally it dawned on me one day that I didn’t HAVE to start with 3 lbs – I could always just add more worms over time until I reach the target quantity (I’m dazzled by my own brilliance sometimes – lol). Apart from having that ‘Eureka’ moment (haha), things DO seem to be winding down for the season up here as well, thus it’s less of a issue to set aside worms for this project. SO…I finally got my Inn up and running with just over 1 lb of Red Worms (so far).

As you can probably tell from the photo above, I need to work on getting my Inn to hang properly – it’s looking a little sloppy at the moment (due to my poor hanging skills, I can assure you).
😆
I’m actually thinking very seriously about buying a laundry hamper stand similar to the one shown in my ‘Worm Inn Update‘ post (which features one of Robyn’s product shots). I think this is definitely the way to go since it looks good and allows you to easily move the system around.

Setting up the system was very straightforward. As mentioned in other posts, I’m lucky enough to have considerable amounts of aged manure bedding (basically manure mixed with straw then allowed to rot for a period of time) on hand, so it’s very easy to create a nice ‘worm habitat’ in any new system I am setting up. Normally I would mix shredded cardboard with food waste and let this sit for a week before adding the worms. With the manure bedding I can add the worms right away. 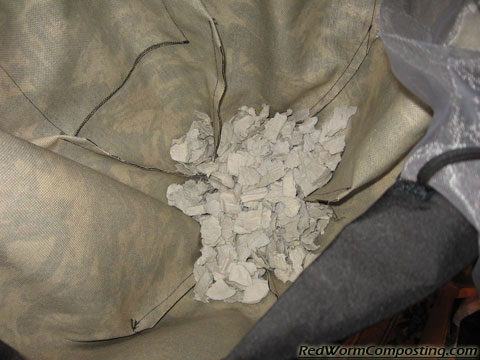 The first thing I did was add a ‘false bottom’ of moistened shredded cardboard (moistened after picture was taken). This isn’t absolutely vital – just something I like to do to keep the main contents of the system away from the bottom during the initial start-up phase. This cardboard will eventually be released from the bottom (likely undecomposed) once I start taking out vermicompost. 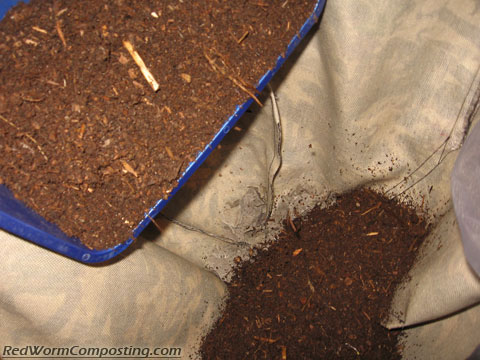 I next added a layer of the manure compost 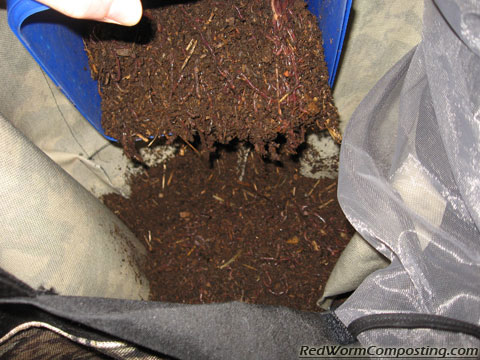 Next, it was time to add the worms – my first 1.1 lbs. I will likely add another 2 lbs or so during the next couple of weeks. 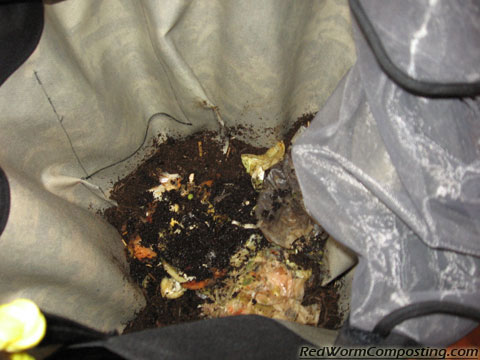 I then added another layer of the compost plus some rotting food waste I happened to have ready to go. 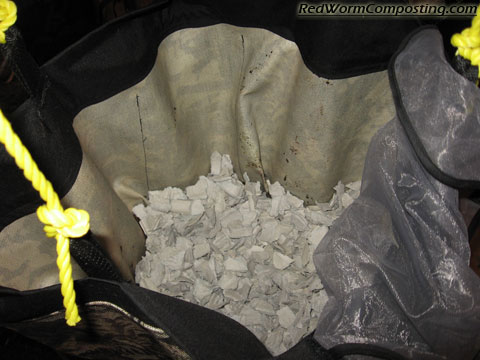 Yet another layer of the compost, then a thick layer of shredded cardboard over top. Because the system is open I decided to spray the upper bedding layer with water (after picture taken). I will likely need to add water to this system on a regular basis to keep things moist for the worms.

It is very exciting to finally have my Worm Inn up and running! I looked in this morning to make sure my worms weren’t trying to make a break for it and was very pleased to see lots of them up in the rotting food waste layer – presumably happily munching away on millions of microbes.

Unlike my Worm Bin Journal, I plan to provide updates for this project on a much more regular basis (at least one a week). So stay tuned!